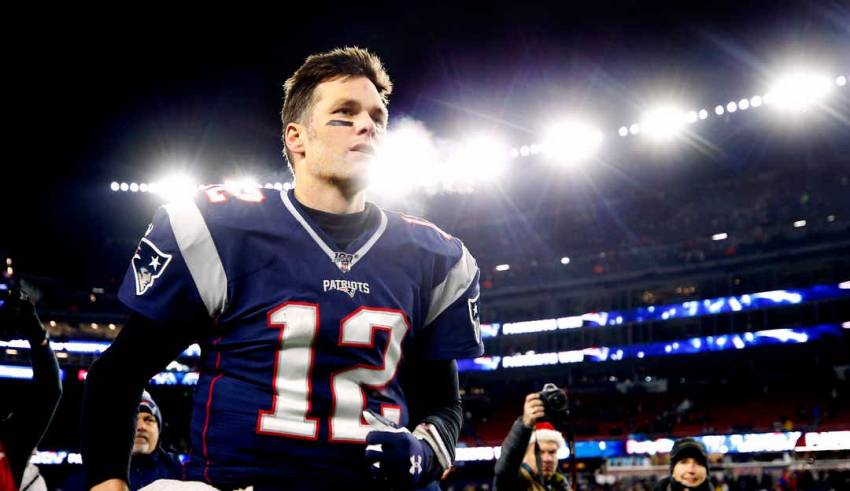 Pressure’s on: Tom Brady. The backdrop for the rare AFC Wild-Card game in Foxborough, Massachusetts, includes the buzz about the Patriots’ iconic quarterback possibly playing his final game at Gillette Stadium. Brady, without a contract for next season, has typically downplayed the story line. Still, this isn’t business-as-usual, even though Brady has taken New England to four of the past five Super Bowls and has 30 postseason wins under his belt, while the other 11 quarterbacks in the field have combined for 26 playoff wins. It’s the sagging, 15th-ranked Patriots offense. Brady, whose 24 TD passes are the lowest in a full season since 2006, hasn’t had the typical support around him. And therein lies the pressure on the 42-year-old Brady, so capable over the years of bailing New England out of trouble and covering up for weaknesses. This time, the offensive line protection is suspect, there’s no reliable power-rushing game and they are thin on wide receiver prowess. Plus, there’s no Gronk. That’s a lot to put on a man battling Father Time, too. It’s no wonder that some of the Patriots’ biggest plays in recent weeks have come off gadgets – such as the 38-yard TD pass last weekend to linebacker Elandon Roberts. And now comes ex-Patriots linebacker Mike Vrabel with his pesky Titans. The Patriots earned a first-round bye in for the past nine consecutive playoffs, but there’s no such luxury now. Just more of the expectation that Brady can somehow pull off some magic. No, you can’t count Brady out. At least not yet.

Who’s hot: Carson Wentz. He got his groove back – at the perfect time. The Eagles franchise quarterback has played the best football since a knee injury wiped out his would-be MVP season in 2017, reflected with a 7-0 TD-to-INT ratio during the four-game winning streak that propelled Philadelphia to the playoffs. Wentz is the first 4,000-yard passer ever for the Eagles (no, McNabb never hit that mark). And he has lifted his game when his injury-riddled team – the Eagles have suffered significant hits at running back, receiver and along the offensive line – needed him the most. Perhaps the biggest indicator of all comes with his reduction of turnovers. If that pattern continues Sunday, it could be the ultimate swing factor, because Wentz committed four turnovers the last time the Eagles the Seahawks, in November.

Key matchup: Michael Thomas vs. Xavier Rhodes. The Vikings typically roll with zone coverages, so the task of accounting for the star receiver who set the NFL’s single-season record with 149 catches won’t fall exclusively on Rhodes. But man-to-man situations occasionally pop up, and the Saints would have a decided advantage if Thomas is singled up on Rhodes – a former all-pro whose rocky season has been marked by more penalty yards than any cornerback in the league. Thomas’ production is largely driven by his precise timing with Drew Brees on short and intermediate routes, while Rhodes and fellow corners Trae Waynes and Mackensie Alexander generally allow too much cushion off the snap. It’s a strength vs. weakness scenario that Minnesota must overcome to have a chance.

Rookie watch: Travis Homer. For all the buzz about Marshawn Lynch’s return to boost Seattle’s injury-ravaged backfield, the sixth-round pick from Miami (Fla.) made his first NFL start in Week 17 and proved to be a viable fill-in with 92 yards from scrimmage against the 49ers. He was particularly impressive in the passing game during crunch time. Lynch, who praised the rookie, figures to have an increased load on Sunday in Philadelphia, but with the quick-accelerating Homer in tow the Seahawks could have makings of a potent 1-2 punch – regardless of which one lines up as the starter.

Next man up: J.J. Watt. After missing half the season with a torn pectoral muscle and ensuing surgery/rehab, the three-time NFL Defensive Player of the Year is poised to return in time to supply heat on Bills quarterback Josh Allen. The Texans gradually increased Watt’s practice load over the past two weeks, yet D-coordinator Romeo Crennel expressed caution that depends on how well the star defensive end holds up. In other words, with so much at stake, Watt will take on as much as he can handle, with respect to the game situation. His presence should surely provide an energy boost to the entire defense, but bookend rusher Whitney Mercilus could be particularly impacted. Since Watt’s injury, Mercilus had just 2 sacks and the longest stretch of games in his career without a sack (6) as offenses were able to overload blocking schemes to his side.

The road to Super Bowl LIV goes through… New Orleans. Again. At least for now. The last postseason game in the Superdome ended in infamy, with the Rams advancing to the Super Bowl after a bogus non-call of an obvious pass interference helped sink the Saints. Now Sean Payton’s team can make amends during a fresh playoff trek. Yet it would take losses by both the 49ers and Packers in next weekend’s divisional round for the Saints (7-1 in home playoff games under Payton) to host the next NFC title game. Then again, after the heartbreak of last year and the “Minneapolis Miracle” the previous year, maybe the Saints are due for a big break in the playoffs.

Stomach for an upset: Buffalo at Houston. For the second time in three years, Sean McDermott has taken the Bills to the playoffs. You’d have to go back to the 1990s, though, to find a case where the Bills advanced past the first round. That’s part of the challenge now for the Bills, 2 ½-point underdogs on Saturday, needing some signature wins to validate themselves as a serious contender. With a stingy defense, they’ll have a chance. The Texans have been here before. Like last year, when they lost their playoff opener at home in Deshaun Watson’s first postseason start. Can lightning strike twice?

Did you notice? Three teams in the playoff field didn’t manage to have a winning record at home this season. Maybe it’s good that Seattle, Buffalo and Tennessee are all wild-cards who in their wildest dreams of advancing to the Super Bowl, won’t have to play at home during the postseason.

Stat’s the fact: Titans quarterback Ryan Tannehill captured the NFL’s passing title with an efficiency rating of 117.5. This is what can happen when you have six games with a rating of at least 130 – which ties three others, including Russell Wilson this season, for the most such-rated games in a season since 1960. The twist that makes Tannehill’s feat more impressive: He started just 10 games after coming off the bench to replace Marcus Mariota.