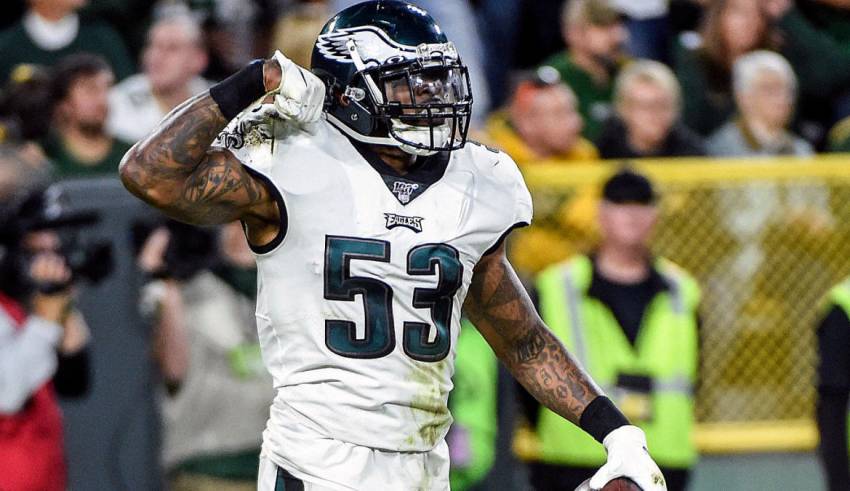 Week 9 of the 2019 NFL season gets underway Thursday night with an NFC West rivalry featuring one of the two remaining unbeaten teams, and then the weekend slate delivers a bunch of juicy matchups in both conferences.

Can the Eagles take advantage of the Bears‘ slide? Who will be under center for the Chiefs against the Vikings? Can the Steelers steal one against the Colts? Will the Ravens finally hand the Patriots their first loss? We’ll find it all out this weekend.

A week after yours truly went 14-1 picking games straight-up, we’ve got more predictions and picks against the spread — for every single game on tap — as you prepare for the next wave of action. Enjoy!

Kyler Murray is a delight to watch, and the Niners will be on the road on a short week. Their Nick Bosa-fueled defense is too lethal, however, to bet against, and Kyle Shanahan will be able to control the ball by sticking to his elite ground game.

London is essentially the Jaguars’ home, and Gardner Minshew got back on track against the Jets. Houston will also be without J.J. Watt. Still, with Deshaun Watson at the helm of their offense, it’s hard not to think these Texans are just the better team.

Allen Robinson should have a nice day against the Eagles’ secondary, and the Bears defense is still a threat. But this smells like a potential coming-out party for Philly at home after the Birds’ surprise rout of Buffalo. Jordan Howard revenge game!

Boy, what a tough one. This one’s kind of set up perfectly for the Steelers, who are rolling, will be at home and have a “D” that can disrupt Jacoby Brissett. Yet Frank Reich can’t be underestimated. Banged up at running back, Pittsburgh will be pressed.

If Miami plays like it did in the first half of its loss to the Steelers, it could have a decent shot at upsetting old friend Adam Gase. Woeful as they may be, though, the Jets simply have more talent. Sam Darnold and Le’Veon Bell can rebound here.

If Patrick Mahomes is playing, the Chiefs will likely be favored by several points. Even if, somehow, he shows up at partial strength, Minnesota is truly on a roll. The Vikings will come in with a few extra days of rest, and their play-action game is killer.

The Titans have proven me wrong pretty much every week. Who in the world can tell me what they are? Derrick Henry should have a day against Carolina’s front four, but I still can’t buy into them. Give me Kyle Allen and Christian McCaffrey on the rebound.

This game just feels like it’s going to be closer than people think. Washington isn’t nearly as awful on “D” as you’d think, and the Bills have kind of been exposed in recent weeks. Josh Allen will inevitably keep it close with mistakes, then eke out the win.

Bruce Arians has a good track record against Seattle, and the Bucs wideouts should put up numbers on the road, where the Seahawks haven’t been as formidable as usual. Russell Wilson, however, should have a field day of his own vs. Tampa’s DBs.

Matthew Stafford has quietly been having a nice season, and Detroit’s been in every game. The Raiders have done really well offensively considering their talent, though, and Josh Jacobs is primed for another monster performance at home.

L.A. will be juiced up after getting the late victory over Chicago, but the Chargers, as a whole, are still pretty uninspiring. Green Bay, meanwhile, has Aaron Rodgers rolling like an MVP candidate. The Packers’ win streak is absolutely bound to continue.

It’s OK to say it now: The Browns are not good. They wasted this season. If ever there were a time for Baker Mayfield, Nick Chubb and the defense to step up, though, it’s in Denver, where the Broncos will be starting backup QB Brandon Allen.

It’s finally time for this vaunted Pats defense to play a good offense. And while Bill Belichick is a master schemer, Lamar Jackson extends plays like no one. Couple that with the fact Tom Brady hasn’t been that great, and we’ve got ourselves big upset potential.

Saquon Barkley will have a few signature highlights as usual, but the Cowboys own pretty much every matchup here. A turnover or two off Daniel Jones should keep them out in front, with Ezekiel Elliott, Amari Cooper and Co. keeping the ball in Dallas’ hands.