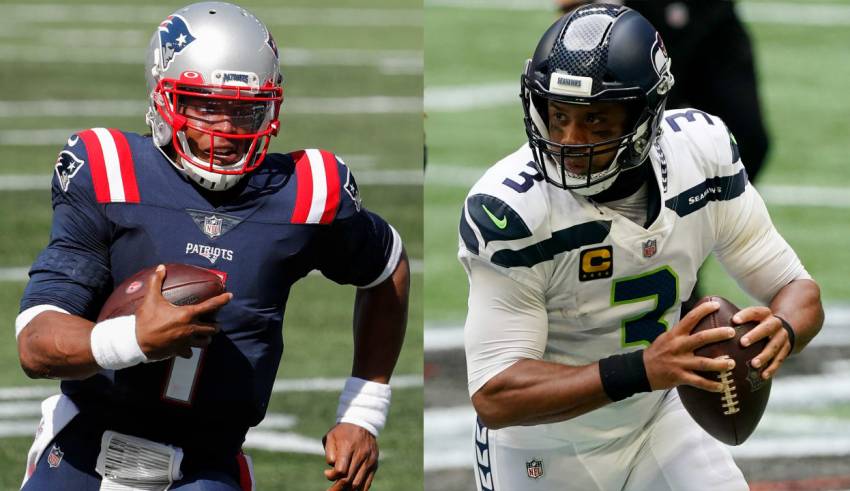 This should be a nice bounce-back game for Ryan Tannehill after a sloppy opener. The Jaguars were thrilled with rookie cornerback CJ Henderson’s debut, but their defensive strategy without a pass rush this season appears to be “hold on for dear life” while the offense avoids mistakes. Gardner Minshew and Jay Gruden are a terrific match to execute this plan, and undrafted rookie runner James Robinson played like a first-round pick in Week 1. The Titans’ defense isn’t special until proven otherwise, so don’t buy into Tennessee as some heavy favorite in what shapes up as another ugly win.

The Bucs were Christian McCaffrey’s kryptonite last season, holding him to 68 rushing yards and 110 yards from scrimmage combined in two games. Tampa’s key defensive personnel is all back and may be even better with the addition of run-stuffing rookie safety Antoine Winfield Jr. A quiet day for McCaffrey will put more pressure on Teddy Bridgewater, who looked five years younger in Matt Rhule’s scheme last week. Rhule and Bridgewater are learning fast that they have to score plenty to mitigate a talent-poor Panthers defense that figures to break a lot of quarterback slumps. Tom Brady believers can step off the ledge after this one! (Gronk truthers can enjoy the view.)

The following couplets can be true simultaneously. Broncos coach Vic Fangio remains one of the top three defensive minds in football and a problematic head coach because of his game management. Denver’s offense will be scary when Jerry Jeudy, Courtland Sutton, Noah Fant and Melvin Gordon are on the field at the same time, but the unit’s undercooked until these guys get more playing time together. Fangio can coach up unknown rookies in the secondary better than anyone following A.J. Bouye’s injury, yet those rookies will still be overmatched against a Steelers offense that goes four deep with quality at wideout. I’d expect this game to be closer if it were taking place in November.

It looks like the Eagles will get right tackle Lane Johnson, running back Miles Sanders and defensive linemen Derek Barnett and Javon Hargrave back in the mix, just as they lose Brandon Graham, who’s in the concussion protocol. Johnson won’t solve the Eagles’ protection woes alone, especially against a version of Aaron Donald who might somehow be better. I loved what I saw out of the Rams last Sunday night, so this pick is primarily based on the theory that capable 0-1 teams usually find a way to bounce back the following week.

I’m afraid to write this preview because another key 49ers starter will probably be revealed as injured before I finish the paragraph. The football gods taketh, but they also giveth with San Francisco’s schedule over the next month — SEE: both New York teams and the Dolphins on tap in the next four weeks. Despite the injuries, the 49ers are still far more talented and well-coached than the Jets. Nick Bosa versus promising Jets behemoth left tackle Mekhi Becton would be worth the price of admission, if that was a thing that still existed.

One week after struggling with a Cam Newton-led rushing attack, the Dolphins will face the would-be poor-man’s Cam in Josh Allen. After talking about reducing Allen’s carries in training camp, underrated offensive coordinator Brian Daboll did the opposite last week, calling seven Allen runs before one for Devin Singletary. The Bills’ offense is also smartly getting the ball out of Allen’s hand quickly and using far more play-action. The Dolphins were handled twice by the Bills last season, have very little continuity and rank below average in every position group outside the secondary. That’s a bad combination against a cohesive Bills squad.

The Colts averaged the second-most yards per drive in Week 1, and this matchup sets up well for them. The Vikings’ total lack of an interior D-line presence in the opener was even more alarming than the young secondary’s struggles. That’s bad news coming into a matchup against one of the NFL’s best offensive lines, with rookie Jonathan Taylor positioned to rip a few big runs up the seams. Indy’s defense hasn’t played well in a long time — going back to last season, in fact — but this Colts offense is better positioned to win a shootout.

Blowing a 17-point fourth-quarter lead to Mitchell Trubisky is a rather dark timeline to begin a make-or-break season for Lions coach Matt Patricia. Heading to Lambeau Field with a banged-up secondary to face Aaron Rodgers coming off one of his best games in years is even darker. Patricia doesn’t have the personnel to generate pressure consistently, so he usually tries to outsmart opposing quarterbacks with coverages, to limited effect. That strategy isn’t going to work with shaky backup cornerbacks, even with No. 3 overall pick Jeff Okudah likely to make his debut after missing Week 1 with a hamstring injury following a rocky training camp. To top it off, Detroit’s offense doesn’t look like it will be ready to hang in a shootout until Kenny Golladay, who is dealing with a hamstring injury of his own, is right. This is the darkest timeline.

Falcons general manager Thomas Dimitroff was criticized on draft day for passing on CeeDee Lamb, the best player on the board, in order to take cornerback A.J. Terrell, who mans a position of greater need. Terrell had a miserable opener along with the rest of Atlanta’s corners, and now has to match up with an even better receiver group in Dallas that includes Lamb. The Falcons are well-suited, however, to hold up in a shootout. This is an “everyone in the pool” game for fantasy leaguers because Dallas’ secondary is equally unlikely to show well on Sunday. Matt Ryan played very well in Week 1, and the Falcons’ offensive line may be better than its banged-up Dallas counterpart. 2020 y’all!

There’s little reason to buy into a Mitchell Trubisky rejuvenation story. He started 9-of-22 in Week 1 before his receivers started making excellent grabs against a Lions secondary without its top three cornerbacks. The matchup is favorable again this week against a talent-poor Giants back seven in coverage, but the early returns on new coordinator Patrick Graham’s defense were encouraging. Daniel Jones also continues to show a lot of enticing traits for the G-Men. In a coin-flip game, take the man delivering dimes to keep it closer than expected, if not win it outright.

The 49ers hit Kyler Murray three times on his 51 dropbacks in Week 1, according to Pro Football Focus. On Murray’s 13 runs, most of which were scrambles, I counted only one time when the 49ers truly tackled him. He might be the toughest man in the league to get a hand on, in part because the Cardinals play so fast and Murray gets rid of the ball so quickly. That presents a challenge for Washington’s core team strength in the front seven because Murray won’t hold onto the ball nearly as long as Carson Wentz did a week ago.

After jettisoning Philip Rivers, Chargers coach Anthony Lynn is running the offense of his dreams. The Bolts ran the ball in Week 1 at the third-highest rate of Lynn’s Chargers tenure with plenty of three-tight end looks, often setting up for long field goals despite trailing most of the game in Cincinnati. That can work against a rookie quarterback. Despite rookie runner Joshua Kelley adding some juice to the Bolts’ attack, that will not work while trying to keep up with Patrick Maholmes. The Chiefs’ young cornerbacks are worth attacking all day, but the Chargers don’t have the mindset — or the schematic diversity — to pull it off.

What did Bill O’Brien do to the NFL schedule makers in order to draw the Chiefs and Ravens out of the gate? While other defenses knock off the rust, Houston has to deal with young MVPs ready to expose the Texans’ oddly constructed group. Their expensive inside linebackers (Zach Cunningham and Benardrick McKinney) won’t be able to cover Baltimore’s backs and tight ends, and it’s hard to imagine Houston’s pass rush getting to Lamar Jackson, who’s fresh off perhaps the best throwing day of his career. Yes, he’s getting better. Meanwhile, a Texans offensive line that made great strides in 2019 looked rough in the opener, with the Ravens’ complex blitzes the ultimate test for a group’s communication. This game won’t be 41-7 like last season, but it may not be close.

The Patriots’ incredibly diverse Week 1 rushing attack is unlikely to be repeated on Sunday night. That strategy was built to expose Miami’s weak linebackers and extra defensive backs, which is not Seattle’s problem. Similarly, Russ is unlikely to cook at the same temperature against perhaps the best collection of cornerbacks in football. The Patriots will invite the Seahawks to run, and Brian Schottenheimer is not one to turn down that invitation.

Even in a best-case Patriots season (11-5?), this looks like one of those losses. Their offense will take time to build up its passing concepts. They had incredible turnover in defensive personnel up front and have completely transformed their offense. The Seahawks, meanwhile, are locked and loaded from the jump like a team with a top-three quarterback and excellent supporting cast should be. Pats fans know well what those teams look like.

The Saints’ offense was so condensed last week partially because Drew Brees’ interior line didn’t hold up. That shouldn’t be as big a problem against a 2020 Raiders defense that looked too much like the 2019 version in the opener. Las Vegas runs precisely the type of safe-and-sorry scheme that Brees and Sean Payton can dice up, even without receiver Michael Thomas on the field. New Orleans will have to generate more offense this week because the Raiders’ rugged offense led by Josh Jacobs is too dynamic to be held down for four quarters, especially if they get left tackle Trent Brown back. Expect an atypical Vegas night where the visitors end up in the black.

Joe Burrow looked like a rookie in Week 1, which makes sense after no preseason. Baker Mayfield also looked like a rookie, even though he was supported with a good running game and solid protection. While both quarterbacks struggled against pressure, the Browns have the better lines to win up front. Cleveland coach Kevin Stefanski is in a tricky spot; the running backs are the strength of his offense, but the Browns must get Odell Beckham Jr. on track after one of the worst games of his career. Despite Cleveland looking so discombobulated in Baltimore, I’m sticking with the team’s edge in talent for one more week against a soft Bengals defense still missing Geno Atkins. If that doesn’t happen, Browns fans can feel free to panic in the streets.