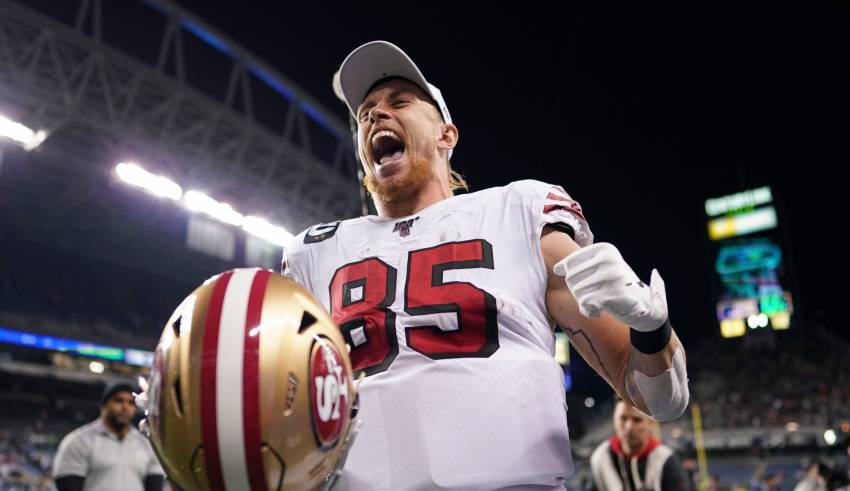 The 2019 NFL regular season is over. The playoffs are set. And we now know which teams will be facing off in the wild-card round next weekend.  Only two playoff spots were open headed into the final regular-season Sunday. The Tennessee Titans took the No. 6 seed in the AFC, and the Philadelphia Eagles earned the NFC East title and the conference’s No. 4 slot. And in the NFC West, the final game of the season was a thriller and one that saw the San Francisco 49ers lock up the division and the top seed in the NFC.

Here is the regular-season finale edition of winners and losers.

In what was basically an NFC West championship game, the Niners prevailed 26-21 in Seattle. So now the road to Super Bowl LIV in the NFC will run through Santa Clara. After missing the playoffs the previous five seasons, San Francisco has all of the pieces that make it a team every other squad should fear. It has a stingy defense led by a stout pass rush. It has as productive a rushing game as there is in the NFL — aside from Baltimore’s. And quarterback Jimmy Garoppolo is playing so thoroughly efficient and avoiding mistakes. Through it all, the Niners’ Kyle Shanahan is a coach of the year candidate, has adapted his game plans to focus on the opposition’s weaknesses and has built a culture of success.

The Eagles are playing their best football of the season, have won four in a row and clinched the NFC East title with a 34-17 victory against the Giants. Wentz’s play is a big reason why. During Philly’s four-game winning streak, Wentz has completed 67.6% of his passes for 1,199 yards, seven touchdowns and no interceptions. That has come even in the face of injuries to his primary targets: tight end Zach Ertz and receivers Alshon Jeffrey, Nelson Agholor and even DeSean Jackson, dating to earlier in the season. If there’s one stat that shows how much Wentz has had to deal with, he became the first player in NFL history with 4,000 passing yards in a season while not having a wide receiver surpass the 500-yard threshold. And now he has the Eagles peaking.

At the start of the day, it seemed improbable that the Chiefs would be watching the first round of the playoffs at home with a bye week. But (thanks to some help from the Dolphins) Kansas City will get the chance to rest after taking down the Chargers 31-21 in the finale. The Chiefs are red hot, on a six-game winning streak and look like one of those teams no one wants to face in January. Patrick Mahomes, Travis Kelce, Tyreek Hill and a slew of other offensive players are certainly a headache to game plan against. But it’s Kansas City’s rushing game and revamped defense, a unit that has been sparked by the play of safety Tyrann Mathieu, that really makes the Chiefs dangerous.

Not only are the Titans headed to the playoffs, thanks to their 35-14 victory against the Texans, but their backfield has reasons to celebrate. Running back Derrick Henry, after a 211-yard, three-touchdown performance, won the NFL’s rushing title this season with 1,540 yards. He’s the heart and soul of the team’s offense. But quarterback Ryan Tannehill has shown he can be a dependable player at the position. He set career highs in completion rate (70.7%) and passer rating (116.5) and flashed an ability to protect the football. The offensive line deserves a ton of credit, but Henry and Tannehill are reaping the rewards.

If it seemed like the NFC West lead changed hands several times over the final month and a half of the season, it’s because it did. And the Seahawks, after their huge Week 10 victory at the 49ers, let their grasp of the division slip away. Seattle lost three of its last four games in the regular season. Normally, the franchise had played very well under coach Pete Carroll in the final month of the season, but injuries and self-enforced mistakes tripped the team up. The Seahawks are incredibly talented but seem to make life harder on themselves. To have success in the playoffs, they cannot simply rely on Russell Wilson’s brilliance. They’ll travel to Philadelphia to play the Eagles and they need to play a complete game to move on.

Going back to the final week of November, the Raiders lost five of their last six games, including what was a must-win in the finale against the Broncos 16-15. Oakland, before its dismal stretch to end the season, looked like it would potentially compete for a playoff spot. Instead, Gruden, the man the franchise hired to bring winning back to the Raiders before their move to Las Vegas, has gone 11-21 in his two comeback seasons in Oakland and has missed the postseason in both. The Raiders lack star power on defense, and that cost them down the stretch. It was simply too easy for teams to score on Oakland. Quarterback Derek Carr has been solid, if unspectacular, and now the team needs to decide what to do at the team’s most important position.

This was very uncharacteristic of a Bill Belichick-coached Patriots team. All they needed to do to seal a first-round bye and the No. 2 seed in the AFC was to defeat a Dolphins team that had won just four games before Sunday. Instead, Miami stunned New England 27-24, even though the Pats were favored by 17 points. Most concerning was how Miami exploited New England’s defense, how receiver DeVante Parker destroyed Patriots cornerback Stephon Gilmore, how Ryan Fitzpatrick consistently carved up the unit. Now, the Patriots will host the Titans in the wild-card round, the first time New England has played in this round in the playoffs since 2009. It has made the playoffs, though, 11 seasons in a row. The Patriots have never won the Super Bowl when they had to play in the wild-card round.

The general manager of the Browns had been mostly quiet, avoiding commenting publicly on Cleveland’s underwhelming 2019 season. But after the team lost to a Bengals squad that entered Sunday with just one victory, Dorsey deserves as much criticism for the mess of a Browns season as does Freddie Kitchens, whom the team fired hours after the finale. The Browns finished the season with a worse record (6-10) than last season (7-8-1), despite additions like receiver Odell Beckham Jr. and the expectation that young players like quarterback Baker Mayfield would progress. Kitchens stubbornly held on to play-calling duties, mismanaged the personalities in the locker room and suffered repeated game-management blunders. Last offseason, when the Cleveland vacancy was actually one of the more attractive ones available, Dorsey hired Kitchens. Now, with the team seemingly having regressed and another coaching search imminent, Dorsey, too, should be held accountable. Because if his next hire flops, his job could soon be in danger, too.