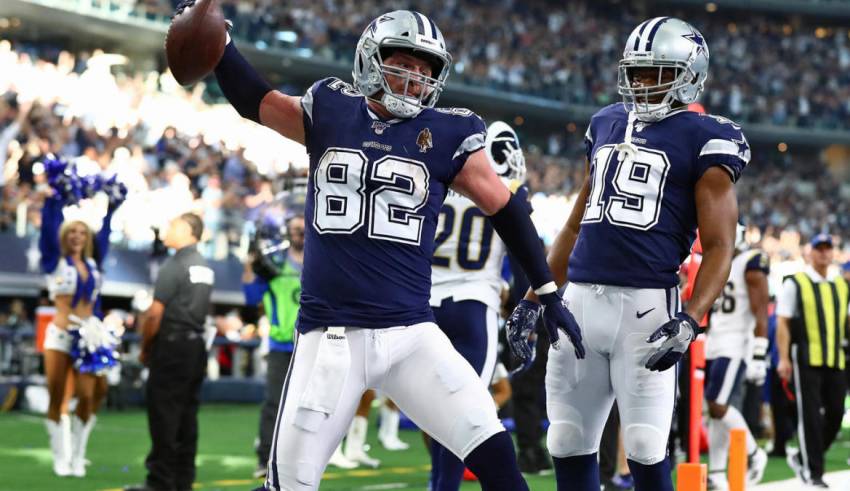 It’s the 15th NFL Sunday of the 2019 season and we’re keeping you updated on all the action and biggest storylines throughout the day. Check back often to find everything you need to know about Week 15.

Jason Witten may be getting up there in age but he’s still got a nice set of hands. He only needed one of those hands for this sweet touchdown grab against the Rams on Sunday in Dallas, pulling in the pass from Dak Prescott for an awesome one-handed score.

The Bears came so, so close to pulling off a miraculous and potential game-tying play at the buzzer in Lambeau but they came up just short. Seems like Chicago really could have had this one…

The Eagles and Redskins have played tighter than most expected but Philly is still making plays. Dallas Goedert made this outstanding one-handed catch during an Eagles drive late in the fourth quarter and it will probably go down as one of the better catches of the weekend.

That catch helped set up a go-ahead touchdown for the Eagles. Wentz found Greg Ward Jr. with a beautiful throw to the back corner of the end zone for a dramatic late TD.

There’s a good chance you’re going to need a few looks at this touchdown connection between Carson Wentz and Miles Sanders before you fully comprehend how it happened. Even the broadcast though Wentz’s pass may have been intercepted at first, but nope. Just a ridiculous touchdown.

And Sanders is getting it done on the ground, too. Get a load of this speed.

Tom Brady and N’Keal Harry are developing a connection in a Patriots offense that desperately needs some help. The rookie wide receiver is having a big day in Cincinnati and Brady found him in the back of the end zone for Harry’s second career touchdown catch.

We haven’t heard a whole lot from Josh Gordon since he arrived in Seattle but this diving catch was something special.

Golden Tate showed off some impressive concentration to make this catch on a deflected pass, then he took it the rest of the way for a Giants touchdown. Sure, he got a little help from a questionable Dolphins defense but, still, that’s a nice play.

It’s been an eventful first quarter for Jameis Winston against the Lions. The Buccaneers quarterback threw for over 200 yards and two touchdowns in the first 15 minutes, including this 33-yard touchdown strike to Scotty Miller. (Yes, he also threw an interception.)

All the Packers needed on this fourth down was four yards but they decided to go for a whole lot more and Aaron Rodgers delivered a perfect pass to Davante Adams for the 29-yard touchdown.

Terry McLaurin caught this one, broke a tackle and then turned on the jets to take it to the house. Watching that guy hit top speed is very fun.

Patriots’ offense on the board early

It’s been a rough couple of weeks for the New England Patriots as they haven’t been able to get much going offensively. But Sunday’s contest against the Bengals should provide a good opportunity to get back on track, and the day got off to a pretty excellent start. Tom Brady dumped it off to James White for a 23-yard touchdown on the Patriots’ first drive of the day.

The wintery elements aren’t effecting Patrick Mahomes too much in the early going, as evidenced by this perfect 41-yard touchdown strike to Tyreek Hill in the first quarter.

Who’s ready for some elements?

There are few things prettier than some snow football, so we should be in for a treat on Sunday afternoon as we get to watch Patrick Mahomes and the Chiefs take on the Denver Broncos at a snowy Arrowhead Stadium. The early pictures indicate it should be a beautiful scene.