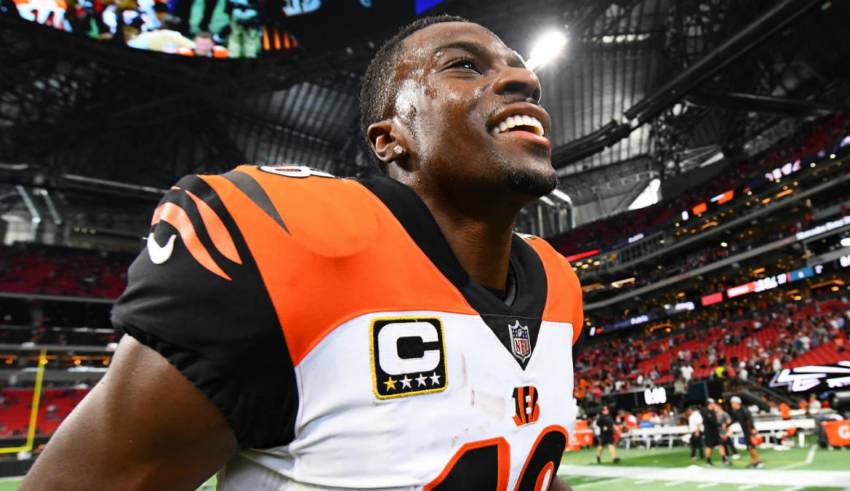 The 2019 NFL trade deadline is right around the corner, and already we’ve seen a handful of teams work the phones to strike deals ahead of the Oct. 29 cutoff at 4:00 p.m. ET. If recent history is any indication, plenty more deals are on the way, and there are some big names — from A.J. Green to Josh Norman — who could be on the move. As we approach Trade Tuesday (that’s not an official term, but maybe it should be), we decided to put on our thinking caps and come up with one realistic trade scenario for each team. “Realistic,” of course, is subjective here, but what is a trade deadline without some crazy trade ideas?

Below, you’ll find one trade suggestion for all 32 NFL teams — even the ones, like the New England Patriots, who’ve already made several deals ahead of the deadline. Here are a few things to note:

Now buckle up and enjoy!

Patrick Peterson is the bigger trade chip, but we can understand wanting to keep him under a reasonable 2020 salary, especially since you can always try dealing him next season when he’s an impending free agent. Suggs is older and an impending free agent so he’s worth selling to a team desperate for some pass rush.

It’s rebuild time for the Falcons, so they should be after not only picks but cap space, and Freeman’s got a bloated contract that runs through 2022. Atlanta can always cut him after the season and swallow $6 million, but why not take advantage of Detroit’s need for an RB1 and see what Ito Smith can do with a bigger role once healthy?

They need a pass rusher. Suggs would be a nice story, and so, too, would a bigger-splash player like Yannick Ngakoue, but Beasley is right in that sweet spot of being a high-upside option who shouldn’t break the bank.

They could use another weapon for Josh Allen, but they also probably don’t want to go broke doing so. AFC East teams swap players all the time via free agency, and Miami won’t care if Parker goes to a rival, so long as they get another pick for the post-Tank days. Buffalo’s got two fifths to make up for losing a pick, too.

The Panthers are short on defensive tackle depth, and Butler’s played well lately, but most of his career has been underwhelming, and their bigger priority is keeping quarterbacks upright, whether or not Cam Newton returns. They’re on a rookie left tackle with no depth behind him, and they’d also get to move up in the draft.

Trey Burton and Adam Shaheen drew a lot of praise not long ago, but neither prospect has developed as expected, and Matt Nagy needs to do something to help Mitchell Trubisky. The Bears haven’t been hiding their pursuit of more tight end help, and Eifert’s upside would be worth their two-pick package.

Sorry, but this is an absolute no-brainer. Green is a star and a fan favorite, but he’s not going to net them any more than this when he hits free agency and inevitably flees Cincy in 2020. You have to sell. Have to. A first-rounder alone is a premium get for an aging, injury-prone receiver, no matter what Mohamed Sanu went for.

The Browns will likely have two thirds in 2020 because of their Duke Johnson deal, and they need a left tackle, like, yesterday. Whether or not he’s game-ready this year, Williams is a must-have for a team that needs Baker Mayfield protected.

Dallas would’ve been a prime candidate to land someone like Ndamukong Suh, but their surprise deal for Michael Bennett eliminates the need for a D-lineman. Instead, they could stand to upgrade on the back end of the “D.”

Derek Wolfe is costly, but Harris is more likely to skedaddle immediately after the season anyway. The Broncos need to let Vic Fangio dive deeper into an overhaul, the Emmanuel Sanders move confirms they’re headed that way, and so dealing Harris — a guy they consistently feel is worse than Harris thinks he is — is a no-brainer.

Freeman’s got an injury history and a big contract, but he’d be the bruiser they thought they were getting with C.J. Anderson — an instant plug-and-play No. 1 to fill in for Kerryon Johnson (injured reserve) and keep the Lions pushing in the NFC North. Even when Johnson returns, Detroit could opt to split carries between them.

It’s not necessarily like them to make a huge splash, but they also spent money this offseason. They can get by with their receivers, but you also don’t pass up adding Green to a Super Bowl-contending roster. If/when he and Davante Adams are healthy, Aaron Rodgers would have the best WR duo of his career.

Look, Norman has fallen off, and that’s a fact. But the Texans need more at corner with Johnathan Joseph banged up. They went younger by trading for Gareon Conley, and with Norman, they’d get a more proven starter. Someone like Desmond Trufant or William Jackson would be better, but they’ve already given up a ton of picks this year.

They need some pass-rushing depth, and Thomas has basically worn out his welcome in San Fran. Chris Ballard doesn’t always like to give up picks, but a conditional fourth-round pick is nothing for a former top-five pick still on his rookie deal.

Just because Shad Khan granted Jalen Ramsey’s wish doesn’t mean he wanted to — meaning there’s still a belief in Jacksonville that the Jags can contend in the AFC South. Now they need a corner, though, and they’ve got extra ammo from the Ramsey deal. Harris would be able to step in and start right away, then Jacksonville could decide later if it wants to lock him up.

You’re kidding yourself if you don’t think the Chiefs are in it until the finish as long as Patrick Mahomes is on the roster. But their front seven needs reinforcements, and there aren’t many better than Atkins, who’s got a big contract but whose presence would offer an instant impact in the trenches.

The Chargers have to move Gordon now, because it’s apparent he either a.) won’t be in their long-term plans or b.) won’t want to be. Austin Ekeler has been more productive, and Gordon has killed any hopes of bringing L.A. back a major pick, so the team should leap at the chance to collect what they can get. The Bears, meanwhile, need to establish the run in the worst way and would probably be OK paying what could end up being a future third for a guy of Gordon’s ability — someone to pair with Tarik Cohen, David Montgomery and whichever QB is under center.

The Rams just traded for Austin Corbett, but they could use all the interior help they can get for Jared Goff. After dealing for Ramsey, they’re not likely to dump everything for a Trent Williams, and Price could slide in at guard or center in a pinch.

Miami hasn’t opened contract negotiations with Drake, so he’s as good as gone once 2020 free agency rolls around. In other words, they should be happy taking any mid-round pick for him.

Their depth at receiver behind Stefon Diggs and Adam Thielen, the later who missed Week 8 with an injury, isn’t much to write home about. They also just cut Marcus Sherels, their longtime punt returner. Spencer would be a low-risk possibility for both jobs.

A.J. Green would obviously be an incredible addition, but are they really doing that after already giving up a two for Sanu? Brate would at least give them a steady presence at a position of need. Tampa, meanwhile, would just be happy to offload his contract with O.J. Howard already on the roster.

This isn’t about a dire need as much as it’s about taking advantage of an opportunity — in this case, the Titans selling. New Orleans is already well-rounded, but they’re also banged up at cornerback and seem bent on making a serious title push.

Jenkins is pretty much the only veteran with decent value and the Giants’ 2019 season is all but officially over. Therefore, they should pull the trigger. The whole defense needs an overhaul, he’s 30 years old, and he’s got a big cap hit in 2020. Dave Gettleman will probably ask for crazy compensation after seeing the Ramsey deal, but he should settle while he can. The Chiefs make a ton of sense as they look for their own defensive upgrades, and they’ve got two coaches — Steve Spagnuolo and Dave Merritt — who welcomed Jenkins to New York in 2016.

Leonard Williams is equally of value as a trade chip, but Anderson, in particular, seems like a given to be moved. New general manager Joe Douglas needs to collect as much draft capital as he can, especially considering he might be around long enough to be part of another coaching regime, and there will be takers for a speedy wideout.

With two firsts and two thirds in 2020, the Raiders can afford to spend relatively big for the aging — but needed — pass rusher. Mike Mayock and Jon Gruden are the kind of guys who appreciate battle-worn vets, and Suggs fits their mold of bulked-up edge presence.

A defensive lineman would be nice, but the bigger priority is arguably getting Carson Wentz and the offense on track. They can’t wait around for DeSean Jackson, and even if he returns soon, Anderson could be a longer-term speed threat. The Birds kind of got burned by dealing a third-rounder for a WR in 2018, but Anderson is different from Golden Tate in that he actually fits the mold of the role player they’re missing. They also reportedly wanted him before.

Burns has been in the doghouse for a while now. His future in Pittsburgh is bleak. So they might as well recoup a pick for him, especially after spending several to bring Minkah Fitzpatrick and Nick Vannett to town.

The Niners could really use some cornerback depth as they look to stay unbeaten with a tremendous defense, and while Jones has had his fair share of injury woes, he’s also just two years removed from being a consensus first-round prospect. The Eagles would probably be happy just to get something for him at this point, and James offers speed/punt-return ability as a throw-in to the deal.

Seattle has already dedicated resources to bolstering its D-line, trading for Jadeveon Clowney and signing Ezekiel Ansah. But Ansah is still banged up, and they’ve got two fifth-rounders in 2020. Why not drop a round to get a guy they had interest in before?

The team likes Peyton Barber, and Ronald Jones is still young, but we live in a world of committee RB situations, and Jameis Winston needs all the help he can get. A better multi-purpose RB would serve Bruce Arians’ offense well, and it’s not like Miami isn’t selling.

If the Titans are done with Mariota (and pulling him for Ryan Tannehill would indicate that, yes, they very much are), there’s no reason they shouldn’t attempt to get something for him before he inevitably hits the open market and signs a backup contract elsewhere. L.A. has Philip Rivers, but Rivers will be 38 in 2020, and worst-case scenario, Mariota could just replace No. 2 Tyrod Taylor. Chargers offensive coordinator Ken Whisenhunt, keep in mind, was the Titans’ coach when Tennessee drafted Mariota.

Trent Williams is important to move, especially since he’s not even playing, but Norman’s contract is just as worse. He’s not ridiculously expensive to cut in 2020, but if they can get something for him now, they would be fools not to make it happen.