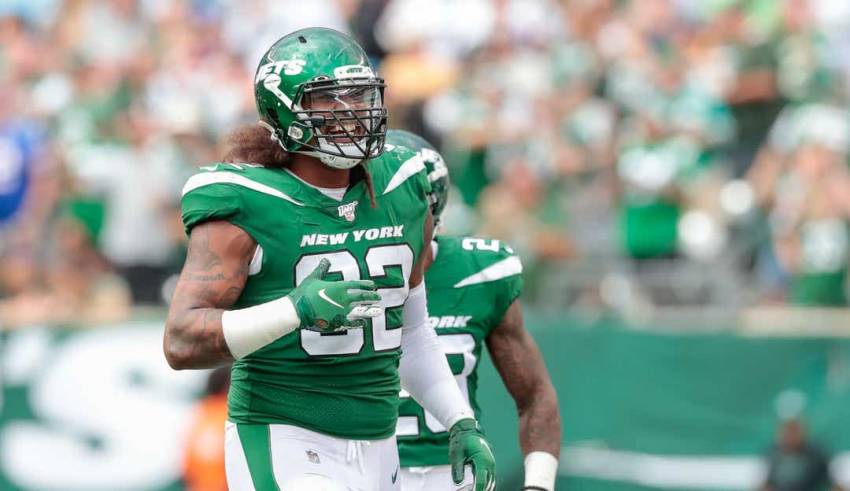 The NFL trade market has been doing brisk business this year.

Oct. 29 is the deadline to make deals, and the Rams got busy Tuesday, acquiring Ramsey and lineman Austin Corbett while shedding Peters in three separate moves. And with so many analytically savvy general managers seemingly more willing to engage in trade talks, the next two weeks could be quite active league-wide.

Here are 19 names (listed alphabetically) to keep an eye on for various reasons:

Tampa Bay Buccaneers OLB Shaq Barrett: With nine sacks in his first four games, he was generating early buzz as a defensive player of the year candidate. Nagging injuries have slowed him down lately, but this week’s bye and the remnants of a $4 million salary could make him an attractive pass rush option while potentially allowing the Bucs to flip what was virtually a throwaway signing for more than pocket change. Logical fits: Lions, Ravens

Atlanta Falcons OLB Vic Beasley: Since leading the league with 15½ sacks during 2016’s run to the Super Bowl, he’s totaled just 11½. Maybe his expiring contract and a change of scenery could rekindle his career, especially if a team that was willing to turn him loose on passing downs came calling. Logical fits: Bills, Chiefs, Seahawks

New England Patriots DL Michael Bennett: His snaps steadily decreasing and now suspended a game for conduct detrimental to the team, it’s obviously not working out well with Bill Belichick. But even at 33 and with his unique personality, Bennett’s versatility and ability to disrupt opposing backfields might still be alluring to somebody for another year or two. Logical fits: Cowboys, Saints, Seahawks

Tennessee Titans RT Jack Conklin: An all-pro as a rookie in 2016, injuries hampered him to the point that Tennessee declined his fifth-year option, meaning Conklin should hit free agency next year. His play has picked back up, and he could be a valuable commodity at a spot that’s usually hard to fill. Logical fits: 49ers, Cowboys, Lions, Patriots

Pittsburgh Steelers OLB Bud Dupree: Solid if unspectacular edge defender whom Steelers could opt to dangle if they decide they’re sellers. Dupree is ticketed for free agency but might still bring back some capital for a team that might like to recoup some after surrendering next year’s first rounder in the Fitzpatrick transaction. Logical fits: Lions, Rams, Texans

Los Angeles Chargers RB Melvin Gordon: It’s not entirely his fault, but not a good look when you don’t produce on the heels of a disruptive holdout. Logical fits: Lions, Rams

Denver Broncos CB Chris Harris: One of the league’s premier slot corners should hit the open market after the season. In the interim, he could be available to fill a valuable role. Logical fits: 49ers, Bills, Eagles, Seahawks, Texans

Titans RB Derrick Henry: He’s basically a one-trick pony, but it’s quite a trick when Henry is in a groove. He could certainly use a better supporting cast to showcase his skills heading into free agency. Logical fits: Lions, Patriots, Rams

Carolina Panthers QB Cam Newton: Sure, it’s a long shot he’ll get moved in the coming days. But if the Panthers cast their lot with undefeated backup Kyle Allen following the bye, can they ever go back to Cam, who’s under contract through 2020? Any deal would presume another organization absorbing the remainder of Newton’s contract and tailoring an offense to his skills. But it’s not every day a recent MVP is potentially available to expedite a reboot. Logical fits: Bears (upgrade over struggling Mitch Trubisky?), Cowboys (hard to imagine, yet things suddenly aren’t going great with still-unpaid Dak Prescott), Titans (obviously).

Jacksonville Jaguars DE Yannick Ngakoue: Looking for a payday, he briefly held out this summer. Ngakoue had averaged 10 sacks per season entering 2019 but has struggled this year. But the pending free agent still has the good to energize a pass rush. Logical fits: Bills, Chiefs, Eagles, Lions, Raiders, Seahawks

Arizona Cardinals CB Patrick Peterson: Heard this one before? The three-time all-pro is fresh off a six-game suspension for PEDs and will be a free agent in 2021. Still, when a lockdown corner is potentially available, it’s worth thinking about making an offer … just ask the Rams. Logical fits: Chiefs, Eagles, Patriots, Saints

Broncos WR Emmanuel Sanders: He’s done a nice job recovering from last season’s torn Achilles and could definitely provide juice to a passing attack — particularly one where he wouldn’t have to be the primary target. Logical fits: 49ers, Bills, Colts, Packers, Panthers

Buccaneers DL Ndamukong Suh: He’s become a bit of a mercenary in recent years but also reminded us what a force he can be during the 2018 playoffs while with the Rams. Bucs would be wise to move him before he re-enters free agency in a few months. Logical fits: Eagles, Chiefs, Colts, Patriots, Raiders, Ravens, Seahawks

Titans TE Delanie Walker: He’s still getting it done — even at 35 and despite missing most of 2018 with a nasty ankle injury. Be nice to see Walker join a contender for the next season-plus. Logical fits: Bears, Patriots, Seahawks

New York Jets DL Leonard Williams: The sixth pick of the 2015 draft won’t wow you with stats, but he could be a Richard Seymour type with a better unit. If the Jets aren’t going to pay up, may as well shop the “Big Cat” rather than lose him for nothing in March — and Adam Gase definitely didn’t shoot down the notion this week given Williams could be one of the most sought-after commodities at deadline time. Logical fits: Bears, Chiefs, Colts, Eagles, Lions, Raiders, Ravens, Seahawks, Texans

Washington Redskins LT Trent Williams: He doesn’t want to be in Washington any longer, but the Redskins have been inexplicably loathe to trade a guy who could facilitate what’s an obvious rebuild. A divorce sure looks like the best course of action for both parties, and the seven-time Pro Bowler might just fetch a first rounder given his contract runs through 2020. Logical fits: 49ers, Browns, Patriots