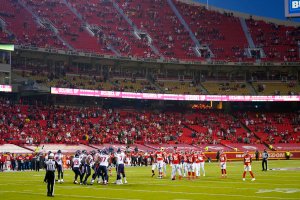 UPDATE, 12:25 PM: The game ended over 12 hours ago and now the final numbers are in from last night’s NFL season opener.

That’s a fumble of 12.3% from the Green Bay Packers vs. Chicago Bears opening game of the 2019-2020 season on September 5. With racial justice center stage at the beginning of the game, the contest between the mid-market reigning Super Bowl champions and the Lone Star state team is up just a touch over the 9-year low of the weather delayed 2018 season opener low in total sets of eyeballs.

Additionally, there were both NBA and NHL playoffs on last night, most noticeably, with the LA Lakers besting the Houston Rockets 110-100 to lead their match-up three games to one.

An easy win for NBC on Thursday night, the kickoff game is the most watched sporting event since KC beat the 49ers on February 2 in Super Bowl LIV. Then again, its not like there’s been a lot of live sports since March and the coronavirus pandemic pulled the plug on games across the sporting world.

However, while not a touchdown start, this first NFL game of what is already an extraordinary season in the time of COVID-19 may prove to be opening night jitters, so to speak – depending on what happens this weekend.

There’s the so-called Battle of the GOATS that occurs Sunday on Fox when now Tampa Bay Buccaneer Tom Brady meets up with Drew Brees and the New Orleans Saints in the Louisiana town. And of course, there’s the LA Rams vs the Dallas Cowboys that very evening on Sunday Night Football too in an audience-less stadium in the smoggy City of Angels. Big drama, and big teams, especially the Cowboys, usually equal big numbers for the NFL and the networks.

PREVIOUSLY, 8:18 AM: With the coronavirus pandemic still raging across America, this year’s NFL season opener was as different as night and day from the 100th season kickoff in 2019.

For one thing, as reigning Super Bowl champs, the Kansas City Chiefs pummeled the Houston Texans 34-20, and the ratings were down — a lot. In early numbers, the primetime NBC game scored a 5.2 among adults 18-49 and 16.4 million viewers between 8-11 p.m. ET.

Now, those numbers for the 8:25-11:30 p.m. ET game will certainly be adjusted upward later, but right now they mark a 16.1% drop over the spectacle of the September 5, 2019 season opener in the advertiser-rich demographic. In an America and an NFL still adjusting to the new normal of live sports in the era of COVID-19, last night’s game also fell 16.1% in total sets of eyeballs from last year’s fast affiliate results. 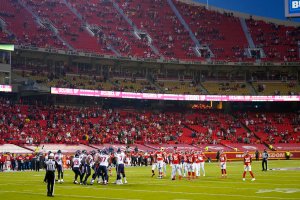 As of now, the viewership results for the game — in front of 17,000 socially distanced fans at KC’s Arrowhead Stadium — is looking like a 10-year low for the NFL and NBC.

On a field bordered with the words “End Racism” and fans booing as players from both teams linked arms before kickoff in a sign of solidarity with those fighting social injustice, the ratings and viewership decline could be an ominous sign for a league and the networks. The stellar numbers of last year’s opener, the Green Bay Packers’ grinding 10-3 victory over the Chicago Bears, kicked off a tightly run season that seemingly had reversed years of weakening numbers. Now it could be a case of déjà vu all over again.

Also, even with the Texans taking an early lead in last night’s game, once halftime came and Kansas City led 17-7, the game lacked drama. By the time the scoreboard read 31-7, a fourth-quarter rally by the Texans was a noble but wasted effort. Add to that the fact that KC and Houston are not big national draws and this opening stumble may end up being a footnote once the Dallas Cowboys and the Los Angeles Rams face off this weekend on the Sunday Night Football opener.

As it is, NBC easily won the night last night even with the NFL dropping.

We will update with more NFL season opener ratings as we get them. As we await that data, take a moment to remember that terrible day 19 years ago and those we lost when America was attacked.

We will #NeverForget. Today we honor and remember the lives lost on September 11, 2001. pic.twitter.com/bCthbI7Vxn