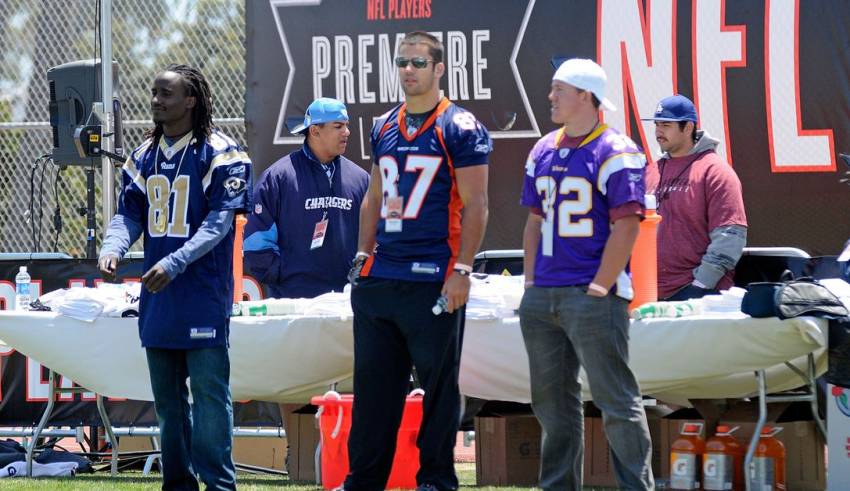 If you asked for a show of hands to convey how many folks were excited about the 2020 NFL Rookie Premiere that was supposed to take place later this week, I doubt many fans would participate. What is usually a twenty-second quick-hit on ESPN showing the latest draftees in their new team’s gear, flopping into crash pads for benefit of their soon-to-be-released sports card photos, will not happen this year as it has in year’s past.

With all the fanfare of the schedule release last week, it would appear this, albeit strange, tradition has quietly been delayed or canceled altogether. While an official cancellation can’t be easily found through google, it’s more telling that the NFL Players Association, the entity that hosts the Rookie Premiere, still has last year’s draft class prominently displayed on their Rookie Premiere landing page.

“The NFLPA Rookie Premiere is our Super Bowl for NFL trading cards as we welcome 40 of the top rookies we expect to be the most collectable for the 2019-20 season and photograph them for our trading cards, capture content and get the players to autograph trading cards for the upcoming season,” said Jason Howarth, Vice President of Marketing, Panini America.

There was no easily found press release for 2020, nor was one sent to Mile High Report. However, the NFL did host a rookie webinar for all 547 rookies back in April.

While it’s a milestone on the NFL’s offseason calendar that very few (if any) care about, it is yet another date that has been impacted by the ongoing crisis. Needless to say, the next major event on the NFL calendar, the 2020 NFL Spring Meetings slated to begin May 19 will not take place in person as previously planned, and will be conducted virtually. The NFL’s last attempt to hold important offseason meetings, the Annual League Meeting that was begin on March 29th, was canceled on March 12th.

Broncos Journal: Declined option almost always equals parting of ways – The Denver Post
Ten things about the Broncos as the rookies join the veterans for the virtual offseason program this week.

Steelers rookie Anthony McFarland to wear Le’Veon Bell’s No. 26: ‘Always been a big fan’ – CBSSports.com
Anthony McFarland is the first running back to wear No. 26 for the Steelers since Bell

John Lynch: 49ers up against the cap, not planning any big moves – ProFootballTalk

July 15 is the target for a long-term Dak Prescott deal, or not – ProFootballTalk

Patriots, Tom Brady’s Bucs don’t play at the same time until December; NFL says it’s coincidental – CBSSports.com
The NFL has an interesting quirk in the schedule involving the Patriots and Buccaneers