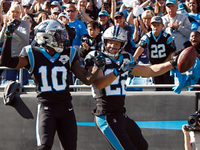 NFL Research offers the best nuggets from each week of games in the NFL. Here are the most eye-popping statistical accomplishments of Week 9.

1) Christian McCaffrey joined Hall of Famer Jim Brown (1963) as the only players with at least 150 scrimmage yards and at least one touchdown in six of the first eight games of a season in NFL history.

3) Tyreek Hill‘s 40-yard TD reception against the Vikings was his 15th scrimmage TD of at least 40 yards since he entered the NFL in 2016, the most such TDs by any player in that span.

5) With his 91-yard rush TD against the Vikings, Damien Williams tied the Chiefs franchise record for the longest rush set by Jamaal Charles against the Saints in Week 3, 2012. Charles had 233 rush yards in the Chiefs‘ 27-24 win over the Saints.

6) After opening his Bills career with five straight games outside the end zone, Cole Beasley has had a receiving TD in three straight games. It is the first time in his career he has scored at least one TD in back-to-back-to-back outings.

7) Ryan Fitzpatrick became the first Dolphins quarterback to throw for at least three TDs in the first half of a game against the Jets since Dan Marino in Week 3, 1986. Unlike today, the Jets went on to defeat the Dolphins 51-45.

8) The Steelers have 15 consecutive games with a turnover, the longest active streak in the NFL. The Giants have had a turnover in 14 straight games entering Week 9, so they could match this streak on Monday when they play the Cowboys.

9) Vikings punter Britton Colquitt and Chiefs punter Dustin Colquitt each had more than 200 yards punting and zero touchbacks today. The sons of two-time Super Bowl-winner Craig Colquitt met for the 14th time in the NFL. Younger brother Britton had won nine of the previous 13 meetings, but Dustin has now won the last three Colquitt matchups.