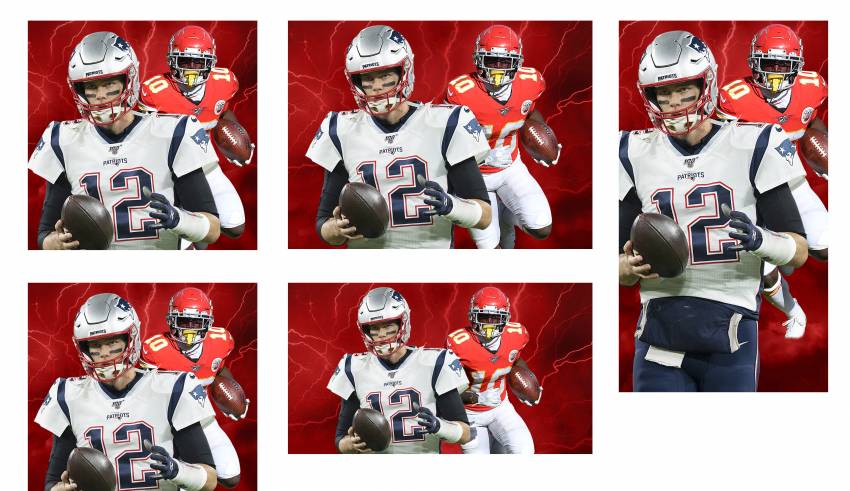 2. 49ers (3): NFL’s No. 1 defense suffered lapse in desert, but Jimmy G is heating up offense about to be reinforced by anticipated returns of FB Kyle Juszczyk and starting OTs Joe Staley and Mike McGlinchey.

3. Ravens (6): How balanced is league’s top-scoring team? Baltimore could be first ever to average 200 yards per game on both land and in air in same year.

4. Patriots (1): Exposed? Tripped up by bad matchup? Or are apparent cracks in armor growing? Time to patch them up as more formidable opponents await on other side of bye.

5. Texans (8): Defense turns in best performance of season in its first game without J.J. Watt, but it might need all of next two weeks to prep for Baltimore.

6. Packers (4): “Good slice of humble pie for us,” Aaron Rodgers said of loss to Bolts. Good time for mulligan, too, since Pack face NFC teams rest of way.

7. Chiefs (9): They put an incredible load on quarterback’s shoulder, whomever it is. Lack of balance looms as a real problem once January rolls around.

8. Vikings (5): Time for Kirk Cousins to prove he’s over that whole prime time bugaboo. Four of Minnesota’s next six games are Sunday or Monday nighters.

11. Colts (7): Rough Sunday. They dropped from AFC’s No. 2 seed to sixth, saw their QB suffer a knee injury and can’t count on Adam Vinatieri at this point.

12. Cowboys (13): They remain a half-step ahead of Philadelphia in NFC East, but Dallas better start notching wins against quality opponents soon. Next opportunity comes Sunday night at Jerry World against Minnesota.

14. Panthers (15): You’re doubtless aware of RB Christian McCaffrey’s mind-blowing stats. How about this one — despite those 207 touches, he hasn’t fumbled.

15. Bills (16): With Battle of Lake Erie ahead, would you rather have Buffalo’s roster or Cleveland’s if you were allowed to start your own NFL team?

16. Steelers (18): Squeaking past Colts could prove massive tiebreaker with Pittsburgh now trailing them by one game for AFC’s final playoff slot.

19. Chargers (21): Amazing what happens when you get K Michael Badgley going… Sticking to run also worked as Bolts bolted to season-high 159 rushing yards.

20. Jaguars (17): They face a lot of bad teams, the kind rookie QB Gardner Minshew has feasted on, down stretch. Would it really make sense to go back to Nick Foles right now?

22. Bears (22): Starting to appear more and more that a guy like Cam Newton might solve a whole lot of problems with Chicago’s fast deteriorating offense.

23. Broncos (27): After all of John Elway’s infamous “swinging and missing” for a quarterback, how ironic would it be if Brandon Allen winds up as an inside-the-park home run?

24. Titans (19): According to Pro Football Focus, their best player is DL DaQuan Jones … which is great, but probably also part of the problem here.

25. Giants (26): Monday night was a pretty good indication why rookie CB DeAndre Baker fell to the bottom of first round. Swagger without substance not worth much.

26. Buccaneers (23): Surely you knew they had top-ranked run defense … which maybe explains why ball is in air against Bucs more than any other team.

27. Browns (24): Baker Mayfield went from a beard to a Fu Manchu to a mustache in span of a few hours Sunday. What’s the old quote? “Image isn’t everything, it’s the only thing.”

28. Falcons (28): In weird scheduling anomaly, their next five are against NFC South foes, so Atlanta gets a jump on opportunity to be a significant spoiler.

29. Redskins (30): After being virtually ignored first month of season, Adrian Peterson averaging a shade fewer than 100 rushing yards over past four weeks.

31. Jets (29): Having moved on from seeing ghosts (presumably), Sam Darnold is now seeing his linemen, namely G Brian Winters, dressing him down on field.

32. Bengals (31): Welcome to the deep end of the pool, Ryan Finley, which includes a Ravens defense that will surely put game on your arm in upcoming NFL debut.