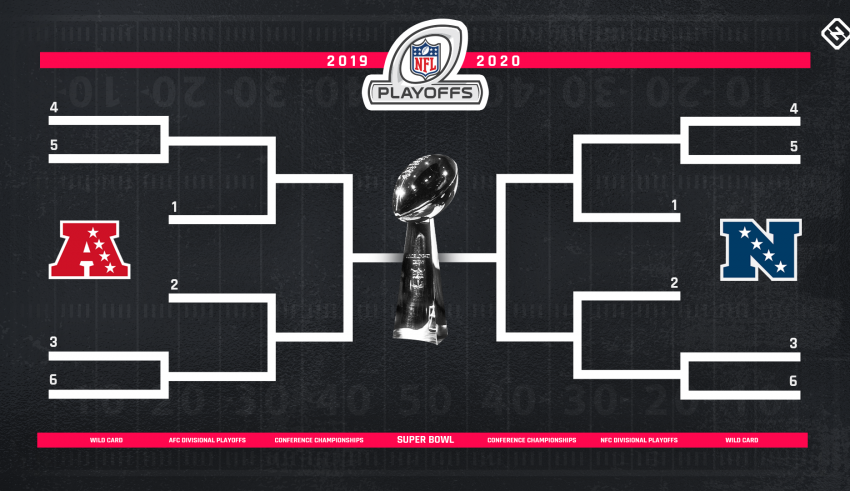 Week 17 is here to end the 2019 regular season, and the NFL playoff picture is almost complete based on the current AFC and NFC standings. Here is an updated look at what each conference field looks like now, with all 12 postseason tickets punched:

1. Ravens, champions, AFC North (14-2) — With their win over the Browns last week, the Ravens clinched the top seed and home-field advantage throughout the AFC playoffs. They rested key players, including league MVP-to-be Lamar Jackson, for their finale against the Steelers and still won to post the best record in franchise history.

2. Chiefs, champions, AFC West (12-4) — The Chiefs beat the Chargers at home in Week 17, and coupled with the Patriots’ shocking home loss to the Dolphins, Kansas City clinched the second first-round bye. The Chiefs own the head-to-head tiebreaker over the Patriots thanks to their win in Week 14.

3. Patriots, champions, AFC East (12-4) — The Patriots won an 11th consecutive division title by beating the Bills last week, but they dropped out of their usual top-two seed by losing to the Dolphins in Week 17. They locked into this seed despite losing to the Texans, who couldn’t catch them for No. 3. They will host the Titans on wild-card weekend.

4. Texans, champions, AFC South (10-6) — The Texans became locked into this seed before losing to the Titans at home in Week 17. They rested key players, including Deshaun Watson, ahead of what will be a physical matchup with the Bills in Houston in the wild-card round.

5. Bills, second place, AFC East (10-6) — The Bills were locked into this seed as the top AFC wild card after missing their chance at the division against the Patriots last week. They rested all their key players in their Week 17 loss to the Jets and will go into the Texans matchup with a mostly clean bill of health.

6. Titans, second place, AFC South (9-7) — The Titans beat the Texans in Week 17 to take care of business and clinch the final AFC wild-card spot over the Steelers and the Raiders. They will travel to face coach Mike Vrabel’s former team, the Patriots, during wild-card weekend.

1. 49ers, champions, NFC West (13-3)  — The 49ers won the division by surviving the Seahawks in Seattle in the final seconds of the final game of the regular season. With the victory, they took the West by a full game and won the tiebreaker for the top seed and home-field advantage with their previous wins over the two teams behind them, the Packers and the Seaints.

2. Packers, champions, NFC North (13-3) — The Packers secured the second first-round bye in the NFC by rallying to beat the Lions. They did lose to the 49ers, but they earned this position with the conference-record tiebreaker over the Saints, whom they didn’t play in the regular season.

3. Saints, champions, NFC South (13-3) — The Saints, who had the top seed as in the 2018-19 NFC playoffs, setttle for third this season as the tiebreakers vs. both the 49ers and the Packers didn’t work out, despite their Week 17 blowout win at the Panthers. The Saints will host the Vikings on wild-card weekend.

4. Eagles, champions, NFC East (9-7) — The Eagles won the division thanks to their Week 17 win at the Giants, finishing one game ahead of the victorious Cowboys, who beat the Redskins. Philadelphia will host Seattle for a second time this season on wild-card weekend.

5. Seahawks, second place, NFC West (12-4) — The Seahawks ended the season on a two-game losing streak to fall down here behind the 49ers in yet another winning season with Russell Wilson and a return to the playoffs. They just played the Eagles in Philadelphia in November, winning 17-9. They get a Week 12 rematch six weeks later.

6. Vikings, second place, NFC North (10-6) — The Vikings were locked into this seed after losing to the Packers last week. They rested key players in their Week 17 home loss to the Bears. That will get them near full health for a wild-card game at the Saints.