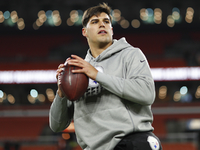 An NFL spokesperson said the league found no evidence to support allegations that Steelers quarterback Mason Rudolph used a racial slur toward Browns defensive end Myles Garrett just prior to the fight at the end of last week’s game.

The fight resulted in Garrett’s indefinite suspension without pay which the NFL upheld Thursday.

ESPN and The Washington Post reported that during Garrett’s appeal hearing this week in New York he alleged that Rudolph used a slur. The Steelers issued a statement saying Rudolph disputed the allegations.

“Mason vehemently denies the report of being accused of using a racial slur during the incident Thursday night in Cleveland,” the Steelers said. “He will not discuss this accusation any further and his focus remains on preparation for Sunday’s game against the Cincinnati Bengals.”

Rudolph’s agent also released a statement saying “the malicious use of this wild and unfounded allegation is an assault on Mason’s integrity.”

Garrett issued a statement on Twitter later Thursday responding to the reports.

“I was assured that the hearing was space that afforded the opportunity to speak openly and honestly about the incident that lead to my suspension,” Garrett wrote. “This was not meant for public dissemination, nor was it a convenient attempt to justify my actions or restore my image in the eyes of those I disappointed.

“I know what I heard. Whether my opponent’s comment was born out of frustration or ignorance, I cannot say. But his actions do not excuse my lack of restraint in the moment, and I truly regret the impact this has had on the league, the Browns and our devoted fans.”

Rudolph spoke to reporters Wednesday and read a prepared statement in which he said he regretted his actions last week.

Browns coach Freddie Kitchens addressed reporters Thursday after the allegations against Rudolph became public, but before Garrett’s suspension was upheld. Kitchens said that any conversations between himself and Garrett about what transpired against the Steelers will remain private.

“I’m not going to say anything about what Myles and I talked about,” Kitchens said. “I’ll support Myles in every way possible.”