January 21, 2021
Trending
Home NFL NFL gets a glimpse of what not to do, thanks to MLB – Yahoo Sports 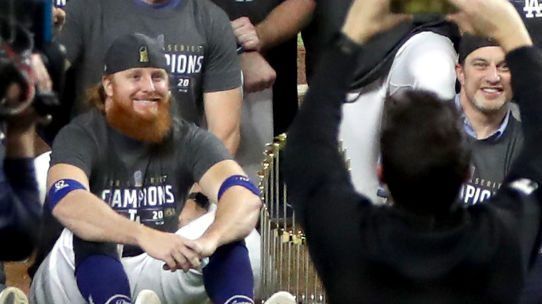 Baseball crowned a champion on Tuesday night. It also created a confusing and reckless set of circumstances.

The league ordered the Dodgers to remove third baseman Justin Turner from the Game Six of the World Series in the eighth inning, after receiving confirmation that he had tested positive for COVID-19. Setting aside the question of how he got it in the postseason bubble created in Arlington, and whether others in the L.A. organization are squarely in the incubation period, the far bigger problem is that Turner made his way back into the dugout and onto the field for the celebration.

And he removed his mask.

“Thanks to everyone reaching out!” Turner tweeted. “I feel great, no symptoms at all. Just experienced every emotion you can possibly imagine. Can’t believe I couldn’t be out there to celebrate with my guys!”

But he was out there to celebrate with his guys. And at times he wasn’t wearing a mask. (As the photo attached to this post confirms.)

Turner supposedly insisted on returning to the field, and apparently no one from MLB or the Dodgers insisted that he not return to the field or that he leave the field.

It’s a horrible look for baseball, and it provides an important lesson for the NFL regarding the importance of taking steps to restrict access, not to simply punish a team or a player or a coach after something like this happens.

Some will say the NFL would never have to deal with this situation because the NFL knows whether players are positive before games begin. But that’s not accurate; it’s possible for a player to provide a PCR sample on the morning of a game and for the league and team to get results during a night game, based on the proximity of the game site to the closest laboratory.

Would the NFL affirmatively remove a player during a game if results returned during a game showed that a player is positive? That’s an issue the league has yet to confront, but it remains a very real possibility. The fact that baseball just experienced it prevents the NFL from saying, “Well, we didn’t see that coming.”

So the obligation for the NFL will be to have a clear and comprehensive plan for the procedures that would immediately apply if an off-site PCR result on a player or coach generates a positive result during a prime-time game, a playoff game staged at night, or the Super Bowl. Will the player or coach leave and, if his team is celebrating the receipt of a Vince Lombardi Trophy, will the player or coach be able to force his way back onto the field for the celebration that he then will claim he wasn’t part of?

NFL gets a glimpse of what not to do, thanks to MLB originally appeared on Pro Football Talk