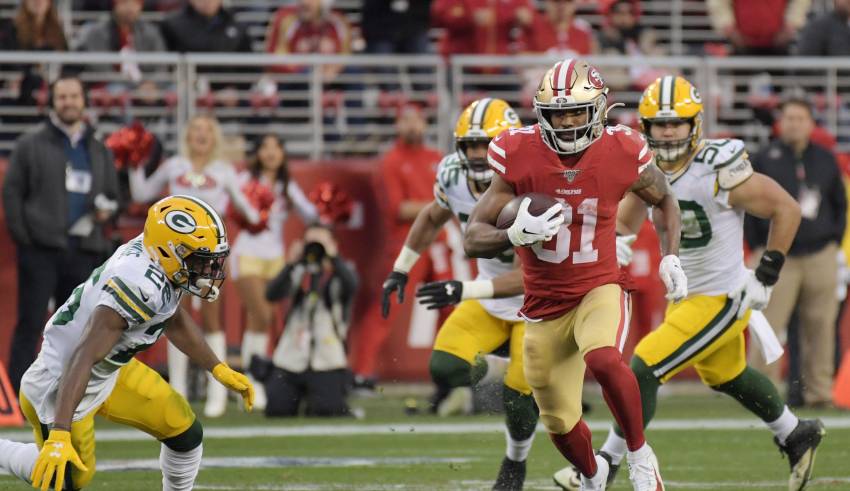 Now we know the teams that will play in Super Bowl LIV.

Conference championship weekend came and went, and the Kansas City Chiefs and San Francisco 49ers will be the ones to head to Miami to battle it out for the Lombardi Trophy. Unsurprisingly, it was the big stars who showed out for these teams in the most important games of the season. Patrick Mahomes dazzled with his arms — and his legs — to the tune of four total touchdowns. San Francisco, meanwhile, dominated the Packers on the ground and Green Bay could not find a solution.

Here are the winners and losers from the conference championships.

He was undrafted. He’s now on his seventh different NFL team. And he might be the most important skill position player on the 49ers. Mostert demolished Green Bay in San Francisco’s 37-20 destruction of the Packers. Mostert broke a 49ers single-game playoff record with 220 rushing yards. He ran the ball 29 times for an average of 7.6 yards per carry. His four rushing touchdowns are most all-time in a conference championship game. This, after he had three scores his senior season at Purdue and was cut by six other NFL teams before landing with the 49ers. Now, on the verge of playing in Super Bowl LIV, he’s still seeking his first career start. That might change in Miami.

OPINION: 49ers’ rout of Packers was a coronation

He has never won a Super Bowl, but now as he is set to finalize his 21st season as a head coach in the NFL, he’ll have his best shot. The Chiefs outran the Titans, 35-24, in the AFC title game. Kansas City’s offense is one of the most explosive in the league and one of the hardest to stop. And it all starts with quarterback Patrick Mahomes and the arsenal of skill position threats the Chiefs wield, like tight end Travis Kelce, receiver Tyreek Hill and the emergence of running back Damien Williams. Reid has so many ways to attack opposing defenses at his disposal. Reid does call Kansas City’s plays. But don’t dismiss the work that offensive coordinator Eric Bieniemy does in getting Kansas City’s offense in form. Late in the year, no offense was as innovative or consistently productive as Kansas City’s. Reid is arguably the biggest reason why.

Fresh off of his Pro Football Writers of America Executive of the Year award, Lynch’s key moves were on display in the NFC title game. Moves like extending Mostert’s contract, drafting Nick Bosa at No. 2 overall, trading for defensive end Dee Ford, drafting receiver Deebo Samuel in the second round, and linebacker Dre Greenlaw in the fifth, signing linebacker Kwon Alexander — they all played their part. San Francisco’s turnaround from 4-12 last season to 13-3, a No. 1 seed in the NFC, and now a trip to the Super Bowl, would not have happened without Lynch, and without head coach Kyle Shanahan.

They knew they’d have to slow down Titans running back Derrick Henry to win, and that’s exactly what this defense did. Henry was limited to 69 rushing yards and one touchdown on 19 attempts. Kansas City put bodies in the box and did a good job of, yes, tackling Henry. Defensive end Frank Clark made waves when he said earlier this week that Henry is “not that hard to hit” and he backed it up. The Chiefs knew that Tennessee favors a zone blocking scheme, so the Chiefs plugged holes and kept bodies in front of Henry. His longest rush was just 13 yards. And this unit, that has steadily improved with each week, is now in a position where it can rival KC’s explosive offense.

No one looks worse for Green Bay’s woeful defensive performance than Pettine, the team’s defensive coordinator. By the end of the third quarter, 49ers quarterback Jimmy Garoppolo had completed four of six passes for 48 yards. Garoppolo didn’t attempt one pass in the third period. In fact, he went one hour and 33 minutes of real time in between completions, or 24 minutes of game action. Yet, the Packers trailed by 27 points at that time because of Green Bay’s inability to stop the run. The Packers did not look prepared for the Niners, despite San Francisco ranking second in the NFL in rushing (144.1 yards a game) in the regular season. San Francisco’s offensive line mauled Green Bay’s front, constantly pushing the Packers back and carving open holes that Mostert easily exploited. In Green Bay’s biggest moment, Pettine, who had enjoyed some success this season, couldn’t find any answers.

The future of the Titans’ backfield

Tennessee was the hottest team down the stretch and opponents seemingly couldn’t figure out how to stop Henry. And quarterback Ryan Tannehill made enough plays when he needed to. Now, with both Tannehill and Henry set to become free agents, the Titans have some decisions they need to make. Tannehill signed a one-year deal to be Marcus Mariota’s backup. After Mariota struggled, Tannehill took over and led Tennessee to a 9-4 record as a starter, including the playoffs. But he wasn’t the anchor of Tennessee’s offense; Henry was. The Titans will have the option to use the franchise tag on either player, but if either (or both) hit the market, the price to lock in each will only increase. Many teams don’t prioritize paying running backs top dollar. Henry, though, is a special running back. How the Titans navigate this offseason — regardless of their decision with each player — will have massive ramifications for the future of the franchise.

He can still sling the ball. He can still create when plays break down. He can still throw darts while on the move. But Green Bay’s loss showed that Rodgers, the quarterback of the Packers, is at a stage in his career where he needs more help if he wants to win another Super Bowl. “It definitely hurts a little more than it does earlier in your career, just because you realize just how difficult it is to get to this spot,” Rodgers said after the game. He’s not wrong. Rodgers is now 36 and will enter his 16th season next year. He’s no longer at the level where he can carry a team all on his own, like, say, Patrick Mahomes can. The Packers aren’t far off from a Super Bowl. But this showed that another offensive weapon or two and defensive improvement is a necessity to get there.