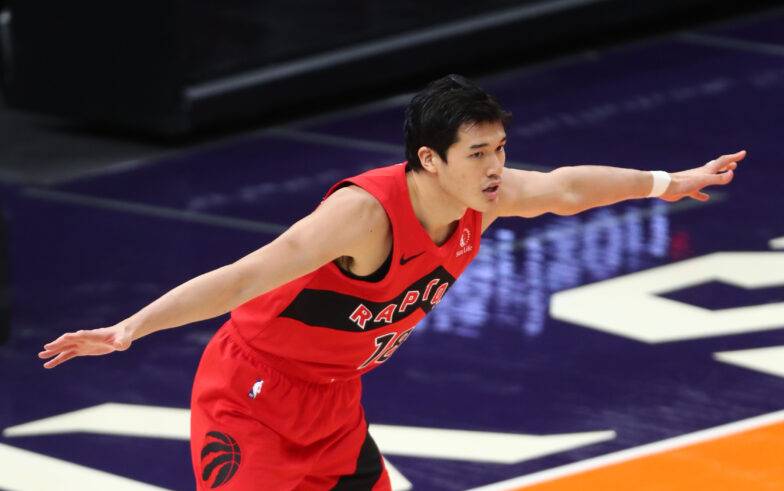 There’s no one way to look at the NBA’s use of two-way players.

For some, the two-way contracts that allow promising young players to bounce up and down between the NBA and its developmental arm, the G League, are great for exposing them to the game at its highest level. For others, they enable bright talents to still get game experience, to compete and stay in rhythm rather than stagnate at the end of the bench.

And now, for an increasing number of NBA front offices, two-way contracts are living, breathing insurance policies against the roster ravages of positive coronavirus tests.

In fact, in the wake of 13 postponed games as of Friday due to an increasing number of players rendered unavailable by health and safety protocols, the league reportedly may permit teams to add a third two-way player for the rest of the 2020-21 regular season.

Currently, each franchise can employ two two-way players. A third would address the need for a team to have a minimum of eight active players to participate in a game. The league is postponing games with the apparent intent to play them when the second half of 2020-21’s schedule is released.

Bumping the rosters to 18 from the current 17 might have saved a few cancellations by this point. It’s hard to think of three inexperienced and unheralded signees as any sort of cavalry. But the way things have gone, every healthy body helps.

“We’ll let you come up with the terminology,” Byron Spruell, the NBA’s President, League Operations, said in a phone interview. “The two-way system really allows these players to get game action as well as practice time. But now it’s about the flexibility for teams to have access to more players, whether it’s for a practice or a game option.”

Toronto forward Yuta Watanabe is on his third go-round as a two-way player, having previously worked under that status for Memphis before signing with the Raptors in November. He saw action in 33 games with the Grizzlies in 2018-19 and 2019-20, and had logged six appearances in Toronto’s first 11 games.

“With the virus, nobody knows who’s going to play in the next game,” Watanabe told NBA.com last week. “So two-way players have to be ready if you get eight, nine, 10 guys out [for health protocols].”

Two-way contracts popped up on the NBA radar in 2017, when rosters were expanded from 15 to 17 to accommodate the status. Essentially, it was the league’s version of major league baseball’s use of farm teams to call up or send down young prospects as needed.

This season, in anticipation of pandemic complications and the G League’s own uncertain circumstances, the NBA and the National Basketball Players Association made some changes to two-way deals. Usage rules now allow a player to be active for up to 50 of his team’s 72 regular-season games. Previously, a two-way player only could spend 45 days, for games or practices, with the main team.

Salaries were changed too, given the expectation that many NBA teams may keep their two-way players on hand all season. They now are paid a flat $450,000 rather than pay determined by their time split between the two leagues. Their salaries do not count against a team’s cap or luxury tax liability.

In previous seasons, two-way contracts were a nice orientation program for young players, an opportunity to dip their toes into the big time while still having a regular outlet for heavy minutes and competition more in keeping with their resumes.

This time, the NBA’s plan to play outside a bubble portended some virus impact. Add the shortened turnaround time between the end of The Finals in October, the Draft on Nov. 18 and the opening of veteran camps a few days later, and an urgency to fill roster spots – or grab them, as the case may be – descended. Both front offices and players’ agents saw the two-way slots as essential.

“More than in years past, a lot of people committed to two-ways on Draft night as just a way to deal with the uncertainty of the rosters,” said Dan Tolzman, Toronto’s assistant GM and VP of player personnel. “Every year, second-round picks, a handful wind up being two-ways. But this year, there were players picked as high as in the 30’s who ended up on two-way contracts. That’s pretty uncommon.

“Usually drafted rookies like that would be the 14th or 15th man on the roster. Now if those guys are on a two-way, that opens up a roster spot for a more veteran player. It’s one way to tackle the depth question this season.”

The NBA has updated its COVID protocols in light of an upswing in game cancellations.

Only players with fewer than four years of NBA experience are eligible for two-way deals. So no team can sign and stash Jamal Crawford, Isaiah Thomas or Kyle Korver there as super-reserves.

A reported 29 players from the 2020 Draft signed two-way deals, per a league spokesperson. The average age for all two-way players is about 22.5 years old.

Many have some NBA experience, mostly meager. The most seasoned in 2020-21 is Frank Jackson, who boasts 120 appearances with New Orleans and added three more for the Piston heading into the weekend.

Absences, whether caused by virus tests or traditional injuries, have meant opportunities for G League players. Miami point guard Gabe Vincent, in his second season, appeared in only three games through Thursday but averaged  17.3 points and 4.3 points, and logged a combined 71 minutes in starting the two most recent.

With guard Markelle Fultz’s season ending in Orlando with a torn ACL, two-way guard Jordan Bone was deployed by coach Steve Clifford in six recent games for a total of 93 minutes. Then there is Golden State’s Juan Toscano-Anderson, who started twice for the Warriors in the first week after forward Marquese Chriss suffered a broken right leg.

“I don’t want to say we’re ‘lucky’ this season because that’s ironic to say in the middle of a pandemic,” said Toscano-Anderson, who went undrafted in 2015 after two seasons at Marquette. “But you have to take advantage of the circumstances that you have. I have no control over the rules or the protocols. But any two-way player should be trying to take advantage of any opportunity.”

Toscano-Anderson, 27, averaged 3.2 points and 3.3 rebounds in 15 minutes while playing in Golden State’s first six games. He had not appeared since Jan. 3. Such is the understudy existence of a two-way player, more so even than experienced reserves.

“If you’re on an NBA roster, you should be prepared to contribute some way or some how,” said Toscano-Anderson, an Oakland native. “I feel like all two-way players are deserving of that spot. It’s up to you, in sports or in life, to seize the moment and take advantage of the opportunities you’re given.”

Toscano-Anderson’s two-way running mate with the Warriors is Nico Mannion, far more raw at age 19. He was the No. 48 pick back in November after one season at Arizona, and the son of former NBA journeyman Pace Mannion, who played 216 games from 1983 to 1989 with six different franchises.

Mannion had played only eight minutes through the Warriors’ first dozen games, due primarily to Steph Curry and Brad Wanamaker staying healthy. That sort of situation is extremely knock-on-wood, more so this season than most.

“The biggest thing for me is just learning,” Mannion said. “With this coronavirus, you never know what’s around the corner. People might get sick. If that happens here, we’ve got Juan and me just in case we need to suit up.”

In a normal season, two-way players would yo-yo between their two teams. They’d try to be sponges at the NBA level, learning by practicing and watching. Then they would get their reps and sharpen their rhythm playing big minutes for the G League club.

Warriors coach Steve Kerr said that split of time would be the best combination for a promising talent such as Mannion. “It would be great for G Leaguers, guys like our guys and Nico especially, to just play basketball for a month straight,” Kerr said. “And then as many practices with us as well.”

But until roughly a week ago, it wasn’t clear if or when the G League would even be an option. The latest plan is for 18 teams to play a shortened schedule in isolation at the same Walt Disney World complex where the NBA staged its restart and postseason last summer. Several G League operations, such as Tacko Fall’s Maine Red Claws, have chosen not to participate in the bubble once it begins in February.

It still isn’t known what specific protocols and quarantine requirements will be in place in Orlando. That makes sending two-way players potentially tricky, both for a lag in timing and for potential virus spread. Same for injured NBA players who, in years past, might have dropped in to play a G League game or two as their last stage of rehab.

Spruell believes the NBA will be able to craft protocols that will enable a “seamless transition” into or out of the “Gubble,” as some have dubbed it.

Don’t be surprised, though, to see two-way players living a one-way existence this season. If NBA teams are considering adding a third such player to the roster, they can’t be too inclined to farm out someone already on the roster, when a rash of positive tests could hit hard.

“There’s still so much unknown, in terms of what the in and out assignment abilities are,” the Raptors’ Tolzman said. “Normally we line up the two schedules and map out as best we can for maximizing the back and forth. As soon as our game schedules are set for the bubble, we’ll try to do the same thing.

“But we’ll keep in mind that, especially this year, something could happen with the main team that we’d need all hands on deck rather quickly.”

The views on this page do not necessarily reflect the views of the NBA, its clubs or Turner Broadcasting

Welcome to the NHL on Tap. Three NHL.com writers will share what they are most looking for…