January 17, 2022
Trending
Home NBA NBA's return by Christmas appears to be on track despite Covid – CNBC 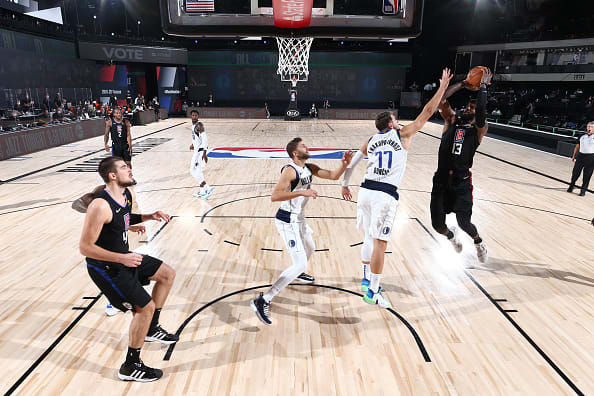 Paul George #13 of the LA Clippers shoots the ball against the Dallas Mavericks during Round One, Game Six of the NBA Playoffs on August 30, 2020 at the AdventHealth Arena at ESPN Wide World Of Sports Complex in Orlando, Florida.
Jesse D. Garrabrant | National Basketball Association | Getty Images

As the world awaits the U.S. presidential election’s final results, the National Basketball Association is attempting to get its politics in order.

The league is a day away from its extended deadline to resolve collective bargaining issues surrounding a quick return for the 2020-21 season, weeks after completing its bubble in Orlando, Florida. And all signs point to a return in December, barring any setbacks following meetings planned for Thursday.

The NBA has long established its brand around Christmas Day games, and network partners are pushing for the league to return sooner, estimating more than $500 million in added revenue should it return by Dec. 22.

“The networks tell the NBA what would be the best in terms of exposure, ratings and revenue,” said longtime television executive Neal Pilson.

Some NBA team presidents have also pinpointed December as a return, preparing for safety protocols and marketing plans. But challenges await.

The NBA has to overcome several issues, including setting a new salary cap and inserting guidelines around free agency, which will occur during what appears to be a second wave of Covid-19. Also, the league needs to lobby local governments to allow fans back into arenas.

“They’ve got a real tricky situation to a complicated situation,” said Patrick Rishe, director of the sports business program at Washington University in St. Louis.

Todd Krizelman, co-founder and CEO of advertising firm MediaRadar, said an NBA return in December could have at least a $200 million impact just for the month alone.

The firm used ad spending data from 2017-2019 to “get a sense of what typically gets spent at the end of the year, and there is a lot of money at stake,” Krizelman said. He added the NBA generally solicits more than 500 sponsors using the league to attract holiday consumers for November and December.

Projected revenue aside, Pilson and Rishe warned of danger should the NBA and the National Basketball Players Association fail to agree to a December return.

If the league still aims to play a nearly full season, but at a later start, ESPN and Turner Sports would be on a collision course to compete for viewership against the Tokyo Olympics next summer.

In September, NBA Commissioner Adam Silver mentioned a scenario that top players could miss the Olympic games should NBA games still be in progress. But the league risks further harming its ratings going up against the world’s biggest sporting event, which are broadcast by NBC.

“The Olympics take away audience,” said Pilson, who spent 13 years as CBS Sports president. “They take away dollars that might be spent on the NBA. Certain advertisers would have to make a decision, and they’d probably opt for the Olympics.

“It creates competition for publicity, TV ratings and for the audience. So, it doesn’t make sense for anybody to go up against the summer Olympics.”

An empty court and bench is shown before the start of a scheduled game between the Milwaukee Bucks and the Orlando Magic for Game Five of the Eastern Conference First Round during the 2020 NBA Playoffs at AdventHealth Arena at ESPN Wide World Of Sports Complex on August 26, 2020 in Lake Buena Vista, Florida.
Kevin C. Cox | Getty Images Sport | Getty Images

During an interview with CNBC, NBA Deputy Commissioner Mark Tatum echoed the league’s “goal” is to play games in-market and with fans.

Major League Baseball and the National Football League have allowed spectators to return, but their venues have been outdoors or in larger stadiums that can enforce social distancing and proper ventilation.

But some states, like Texas, are allowing indoor arenas to operate.

NBA clubs have gathered information about such live events to get ideas on allowing spectators back safely. One idea is to sell tickets in two and four groups, similar to MLB’s World Series in Arlington.

The NBA could also emulate MLB’s move to use multiple bubbles to limit team travel next season. But that would take convincing the NBPA, which could be a hard sell.

“There are just a variety of reasons why after their recent experience, which they did a wonderful job pulling off on so many different levels, you can understand why the players wouldn’t want to put themselves through that for an entire season,” Rishe said.

Tatum told CNBC the NBA is “having lots of conversations with teams and players” on details surrounding the logistics of the 20-21 season.

Though highly probable, a December return has faced some pushback because postseason teams, including the NBA finalists Los Angeles Lakers and Miami Heat, haven’t had sufficient time to recover. The Lakers won the championship only a few weeks ago.

It has led to the chatter surrounding top stars missing games should the league return too soon. But should that occur, the NBA has more than enough teams to brand, especially on Christmas, as the star-loaded Golden State Warriors and Brooklyn Nets would more than compensate.

Considering the media money involved, Rishe doesn’t see the challenges stopping a December return. Agents have also advised players to prepare for a December start and don’t foresee the players association opposing when it discuss the matter on Thursday.

Rishe predicted the losses from Covid-19 would also accelerate expansion talks over the next few years. NBA owners can recoup revenue from expansion or relocation fees. The last time the league added two expansion teams came in 1995. Then, both the Toronto Raptors and Vancouver Grizzlies each paid $125 million.

“Seattle and Las Vegas are by far the two most likely markets for various reasons,” Rishe said. “Today, if it was two teams, you’re talking over $1 billion that would be shared, and those two new expansion teams will not get their share of media revenues at the beginning.

“If nothing else, those opportunities — corporate partnerships with assets that haven’t been fully vested in in the past and league expansion — are unquestionably the things that are on their [owners] mind.”