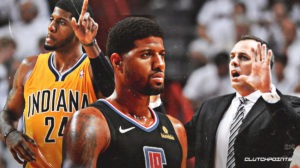 NBA teams are starting to brace for a significant number of positive tests as a Western Conference playoff team showed four positives in the past few weeks, according to ESPN’s Adrian Wojnarowski. Teams will start the full testing of their players on Tuesday, as Training Camp 2.0 is slated to start on July 11 at the Disney campus.

This becomes a bigger concern for non-guaranteed playoff teams, who could lose players to an extended quarantine period before they’re allowed to travel to Orlando. Playoff teams are less worried about their need of key players for seeding games in August, as they will have more time to get them back into shape.

Most teams (and players) are worried about potential soft-tissue injuries, which could happen with such a short turnaround time after three months of relative inactivity.

The league recently extended insurance for potential career-derailing injuries in the latest agreement with the National Basketball Players Association, but even the prospect of suffering a major injury is daunting for any player.

The hope is that those that test positive are asymptomatic, as statistics show that healthy, young NBA players won’t become seriously ill due to the coronavirus — though no assurance can’t be made that it won’t be the case.

According to Wojnarowski, none of the six teams hoping to get a playoff bid through a play-in tournament believe the restart is worth risking injuries for players they plan to bring into next season.

Some are using this Orlando restart as an extension of the Summer League, which can help them develop young players while protecting some of their veteran players.