August 03, 2020
Trending
Home NBA NBA teams and Microsoft Teams in action: How fans can get in, and get kicked out of, digital seats – GeekWire 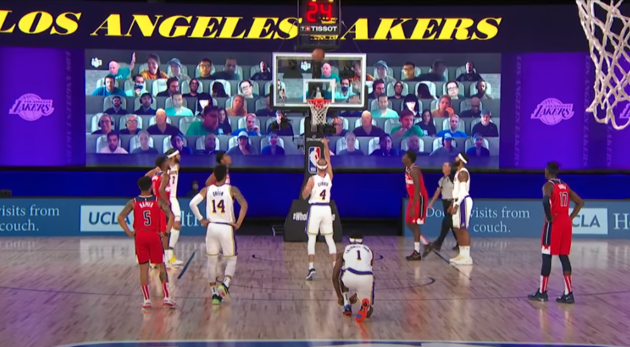 The NBA returned to action on Thursday and brought along virtual fans in an experience powered by Microsoft Teams. Some fans who missed that the tech-enabled future had arrived early thanks to coronavirus were left wondering how to get into the digital seats.

The NBA is inviting around 320 fans per game to fill the virtual stands — which are 17-foot-tall video boards that ring the court. It’s up to each team to decide how to select those fans for games played in NBA’s “bubble” in Orlando, Fla.

According to The Wall Street Journal, designated home teams get to choose most of the fans. Participants will need a device with a camera and a microphone. The Milwaukee Bucks, for instance, are inviting “super-pumped” fans who form a noisy section known as the Clutch Crew in their home arena.

The NBA is officially back! pic.twitter.com/4FYYSQB5Jm

Using Microsoft Teams Together Mode, fans are “seated” in each of the 10 sections surrounding the court and a moderator is assigned to each section. While it might be tough to score a free invite, the wrong conduct would make it easy to get kicked out.

The WSJ reported that moderators can hear fans and see what they’re doing and anything that crosses the line into obscene or offensive language or behavior could lead to a virtual ejection. That fan would be replaced by another fan in a virtual overflow room. Fans who leave their seat during play are also replaced by someone from this pool, and when they return they have to wait to be placed back in the crowd.

The Oklahoma City Thunder told the newspaper that fans are encouraged to cheer and chant, but waving such things as towels and balloon thundersticks is “a bit of a challenge” because the background-setting tool in Teams often distorts anything around a person’s silhouette.

The NBA shared more about all of its broadcast enhancements in a new YouTube video:

The fact that the NBA has a crowd of ppl vía Microsoft Teams…..wow. I tell ya this pandemic has forced our society to use technologies to their full capabilities.

Are the fans in the virtual seats leaving early?

We were in the virtual seats for Lakers Clippers and our group was full throughout the game. One note: @Microsoft stream, played to us about :55 seconds earlier than the tv feed, was jittery throughout the night. That’s why some fans undoubtedly gave up. Need to fix @NBA

The best thing about the “live” fans in the NBA rn is that no matter how much they push Microsoft Teams, everyone’s gonna just call them Zoom calls.

Exactly like how they tried to push the Surface in the NFL and everyone called them iPads.

I actually really like the NBA’s Microsoft Teams fans in the stands. At least you can see real people moving and reacting. The scale is a little weird (some giant, some tiny), but it’s a start.

The nba when they see one of the Microsoft fans fully naked on live TV pic.twitter.com/PCvXcdQvOf