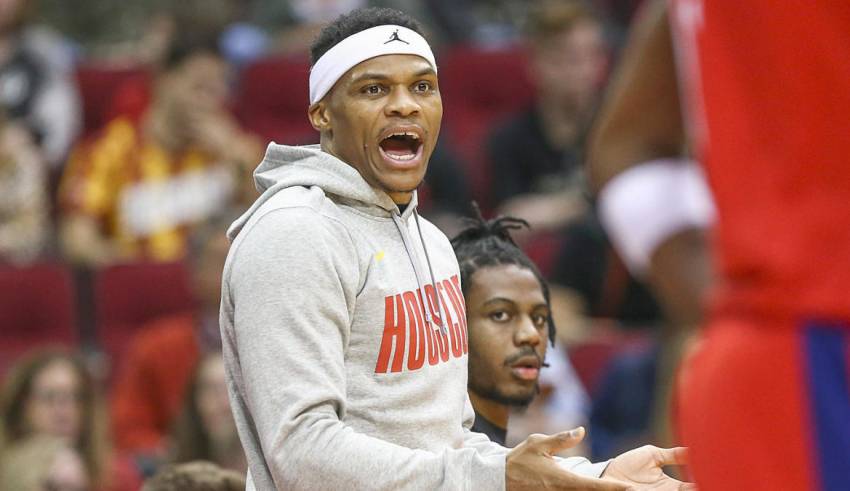 Russell Westbrook is in the middle of his best stretch of production since joining the Rockets, who have won five of their last six games. Over those six games, Westbrook averaged 27 points, 8.2 rebounds, seven assists and two steals on 53 percent shooting.

My colleague Sam Quinn says not to be fooled by this stretch, and that Westbrook has, for both better and worse, been the exact player the Rockets should’ve expected they were getting: A bad shooter who doesn’t defend with discipline, doesn’t move off the ball, doesn’t mesh well with James Harden, and who continues to showcase a questionable shot selection often at complete odds with Houston’s philosophy.

It’s a really good, balanced piece that appropriately credits Westbrook for his rebounding and transition contributions to Houston’s attack. It’s worth your time. Check it out.

For my money, I’m right with Sam and have been since the moment Westbrook was traded to the Rockets. A historically set-in-his-ways superstar who can’t shoot and has never existed as an off-ball cutter, and thus isn’t comfortable in that role, isn’t just going to become a different player on the fly. He’s going to take bad shots. He’s going to miss a lot of them. And defenses are going to ignore him as a floor spacer, which pinches Harden’s penetration lanes and leaves him with only a couple options for kick-out passes.

Now, people will make the argument that while Westbrook doesn’t add much in the way of supporting Harden when the two play together, he can at least keep the offense humming when Harden goes to the bench. But those people would be wrong. When it’s Westbrook on the floor without Harden, the Rockets get outscored by 10.1 points per 100 possessions.

I am not an analytics-heavy evaluator. I use them sparingly, and only when the film lines up. That Westbrook on/off number is not a nerdy stat with no substance. Drooling over his very clear talent and rare athleticism along with his competitiveness and high motor and all the other things advanced-stat-hating traditionalists love to cite does not change the fact the Rockets are simply not as good with Westbrook as they were with Chris Paul, and that will become even more apparent in the playoffs.

You’d be hard pressed to find a better player that gets less national attention than Domantas Sabonis, who is on track to make his first All-Star team this season. Sabonis was a beast in the Indiana Pacers‘ win over the Lakers on Tuesday — which ended L.A.’s 14-game road win streak — posting 26 points, 10 rebounds and four assists on 10-of-15 shooting.

He also did this:

Sabonis is so strong both in body and game. He pounds defenders in traditional back-down mode. He faces up and puts the ball on the floor with purpose. He’s one of the better rollers in the league. He is a mean rebounder who has only collected fewer than 10 rebounds in three games this season. The last time was on Nov. 23, when he had nine. Sabonis ranks fourth in the league with 13.3 rebounds per game. He ranks 18th in the league in ESPN’s comprehensive Real Plus-Minus, one spot ahead of Ben Simmons. The Pacers have won four straight and are pace for better than 55 wins.

Over LeBron James‘ last three games he has posted 80 points, 31 rebounds and 28 assists. Whatever. Look at pretty much any three-game stretch of LeBron’s season, or his whole career for that matter, and he’ll have something close to those numbers. As fellow freak Giannis Antetokounmpo recently said about the King: “He’s an alien.” There’s not much more to be said than that. LeBron’s basketball prowess, at this stage of his career, is not of this earth.

But LeBron as a father? It’s much easier to relate to that guy and the sheer joy he gets from watching his kids do what they love. Last Saturday, after the Lakers defeated Miami on Friday night, LeBron jetted to Ohio to watch his son, Bronny, play against his former high school St. Vincent-St. Mary high school, and wouldn’t you know it, Bronny hit the game-winning bucket. LeBron was loving it on the sideline.

You can’t make that up. And anyone out there who is still trying to say that LeBron is upstaging his son or stealing his spotlight or trying to draw attention to himself by celebrating on the sideline, save it. LeBron didn’t grow up with a father in his life. That he is there for his children and loves and supports them and gets excited when they do well is something to admire, about any father, but particularly one that wasn’t raised with that kind of example to learn from.

He even touched on the subject following the Lakers’ win over the Heat:

“If you ask me what’s been the only sucky thing about this season so far is that my son has played like six games into his freshman year and I haven’t seen one,” LeBron said. “I love what I do. I don’t take this for granted. This is a dream come true. But missing my son, you know Bron Jr., missing [my other son] Bryce’s first game the other day when we left for Orlando, his first game of the season. Missing my daughter at gymnastics and things of that nature, and I understand the business, but it sucks.”

What LeBron continues to do as a man remains, somehow, more impressive than his basketball abilities. Starting schools with millions of his own dollars for underprivileged kids. Community work all over the place. He is changing thousands upon thousands of lives, and he’s done it all without controversy despite a life spent in the public eye since he was 15 years old. Give the man his props.

Somehow, on a night when Luka Doncic wasn’t playing and Giannis scored 48 points, the Mavericks beat the Bucks to put a stop to Milwaukee’s 18-game win streak. Blip on the radar for the Bucks, and further proof that Dallas is a very good team.

Did you know Giannis, despite adding more and more perimeter shots to his arsenal, hasn’t shot below 52 percent from the field in a game since Nov. 21?  He started the season with 19 straight double-doubles and has recorded fewer than 10 rebounds just three times all season — and two of those times he had nine. This guy grabbing a board and immediately turning it into a freight-train fast break is the most electrifying thing in basketball right now.

The Bucks have the best record in the league.