After 4½ months, the NBA is almost back. We are weeks away from real games and, if everything goes smoothly, just under three months away from crowning the 2020 NBA champion. While the Milwaukee Bucks, Los Angeles Lakers and LA Clippers remain the favorites to win it all, the Larry O’Brien Trophy is up for grabs as an unprecedented season concludes in Orlando, Florida, which will be teeming with star players who will make or break their teams’ chances.

Here’s a look at eight X factors around the league and the big questions surrounding each player.

Pascal Siakam: Can he lead a championship offense?

Siakam was the best performer on the floor in Game 1 of the 2019 NBA Finals, dropping 32 points on 17 shots. Now the Toronto Raptors are hoping Siakam can help them defend their championship without Kawhi Leonard.

Siakam is one of the NBA’s most ascendant and unlikely stars. Drafted No. 27 overall in 2016, he averaged four points per game in his rookie season. Four years later, he is one of the best two-way players in the league.

He blends isolations, pick-and-rolls and post-ups as a truly unique volume scorer. His driving spin moves have become his signature weapon, but he also has improved his perimeter touch with each season (now averaging six 3-point attempts per game while converting 36%), making him one of the toughest matchups in the Eastern Conference.

Although Siakam’s scoring efficiency numbers have dropped slightly as his usage has increased this year, Toronto’s offense thrives when he is on the court. The Raptors score an impressive 112.8 points per 100 possessions when Siakam is in games, but that drops to a disappointing 106.8 when he sits.

Toronto relied on Leonard over and over again when it mattered most last season, with the Finals MVP posting a 41.1% usage rate in 58 clutch playoff minutes (No. 1 among players with at least 20 such minutes played). Now, the ball should be in Siakam’s hands during those moments.

The Bucks might be the best team in the East, but if you can slow down Antetokounmpo and contain their 3-point shooting, you can beat them. And that’s exactly what the Miami Heat did on March 2.

Antetokounmpo had his worst game of the season in a 16-point loss, scoring just 13 points on 18 attempts while his team shot a dismal 20.6% from 3. Was that a regular-season fluke? Maybe. But Miami is 2-0 against the Bucks this year, and the Heat’s roster includes one of the only players in the NBA who can physically hang with the reigning MVP.

Adebayo is 6-foot-9, 255 pounds and built for contemporary NBA defense. He has a strong feel for the game while being big enough to rebound and block shots and quick enough to guard the perimeter — compelling evidence to suggest he might be the best Antetokounmpo-stopper outside of Kawhi Leonard.

Check this out: Of the 15 defenders who have guarded Antetokounmpo at least 50 times this season, nobody has held him to fewer points per possession than Adebayo, per Second Spectrum tracking data. The reigning MVP posted nine points on 20 shots in those 66 matchups.

The samples are small, but Adebayo looks like the one guy who could slow down Antetokounmpo in the East. If the regular season is any indication, Miami has a chance to spoil Milwaukee’s season early.

Tatum is one of the best young scorers in the East, and if he catches fire, so can the Boston Celtics. Tatum had an awkward sophomore campaign alongside Kyrie Irving last season, but he leads Boston in scoring this season by averaging nearly 24 points per contest.

Tatum has enhanced his shot selection in a few ways. At 6-foot-8, he is big enough to attack the rim, with driving layups accounting for 30% of his shots — up from 21% last season, per Second Spectrum tracking. That has helped his overall shooting efficiency and also led him to the foul line more often.

As a jump-shooter, Tatum reduced his midrange pull-up activity and greatly improved his step-back. Last year, his 180 step-back jumpers yielded an average of 0.77 points per shot (not good). This year, his 219 step-backs have yielded 1.05 points per shot (much better).

These are all encouraging signs for Tatum and the Celts, but is Tatum ready to put this team on his back in Orlando? If he becomes a reliable go-to scorer in the postseason, that makes life easier on Kemba Walker and Gordon Hayward — and Boston’s offense becomes very difficult to stop.

Khris Middleton: Will he show up when Antetokounmpo is off?

Milwaukee looks like one of the best teams in recent NBA history, but they do have one major flaw. If you can slow down the reigning MVP’s offense, you can make the Bucks mortal. That’s where Middleton comes in.

The All-Star wing isn’t just Milwaukee’s second-best player, he is their stopgap if and when an opponent is able to slow down Antetokounmpo. 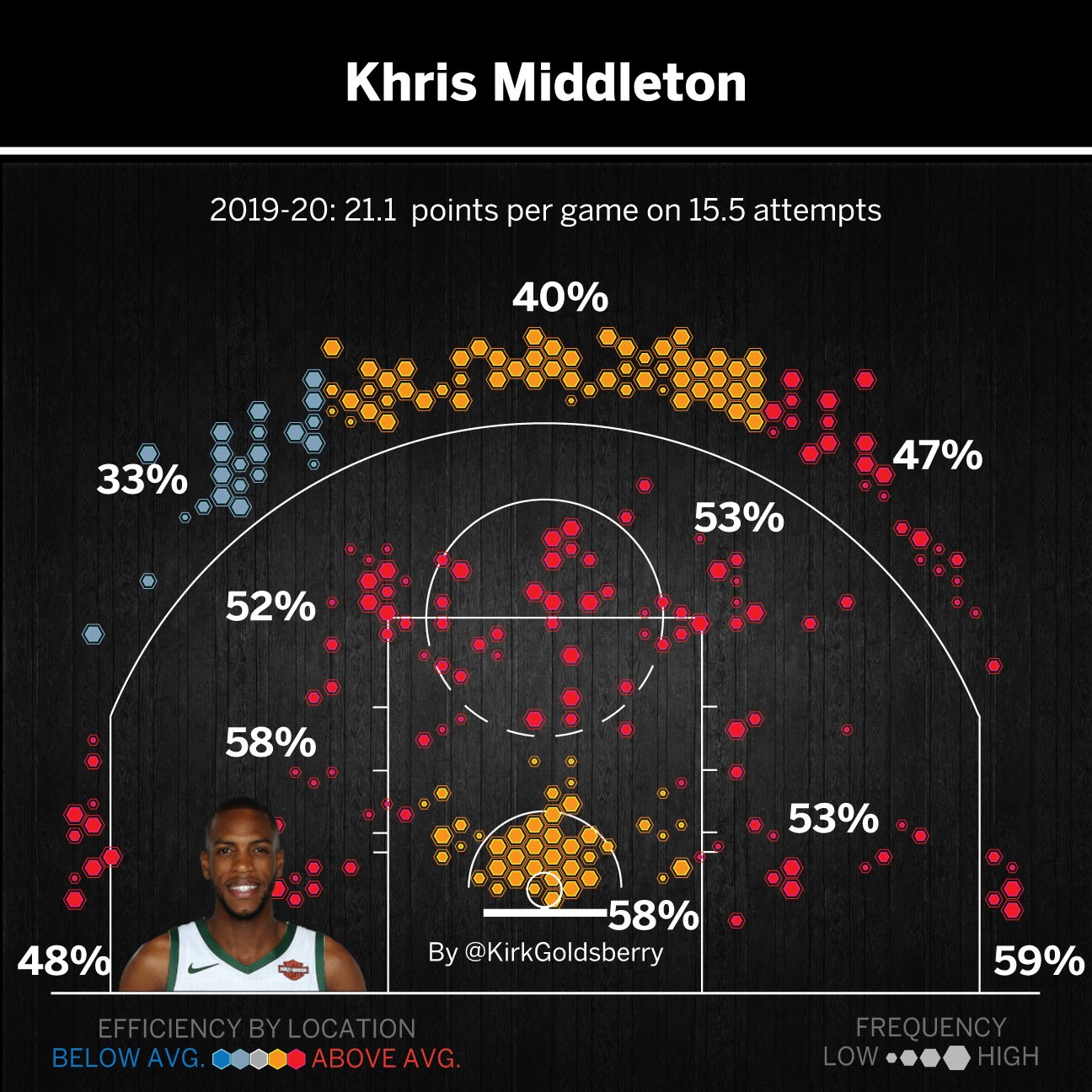 Middleton has emerged as one of the league’s most efficient volume jump shooters. He has been brilliant during the regular season, posting career highs in both points per game and shooting efficiency, but none of that will matter if it doesn’t translate to the postseason.

Middleton disappeared when Milwaukee needed him most last year against the Raptors in the conference finals. In Game 3 — a game Milwaukee lost by six points — Middleton shot 3-for-16 and managed just nine points. In Game 5, another six-point loss, Middleton went 2-for-9 and scored just six points.

For this team to get to the next level — and for them to entice Antetokounmpo to sign an extension — performances like that can’t happen this year. No pressure, Khris.

Paul George: Is he ready for the spotlight?

We all know George is a marvelous two-way player, but he still has a lot to prove. His teams haven’t advanced out of the first round since his Indiana Pacers took LeBron James and the Heat to seven games in the 2014 Eastern Conference finals. Last year, George’s most memorable playoff moment came as the defender who watched as Damian Lillard sent his team packing with an unforgettable series-ending deep 3.

But that was then, this is now: George is 30, squarely in his prime, and this is his best opportunity to win it all. The Clippers looked incredible this season with George and Kawhi Leonard both on the floor, going 24-8 and posting a net rating of plus-11.6. 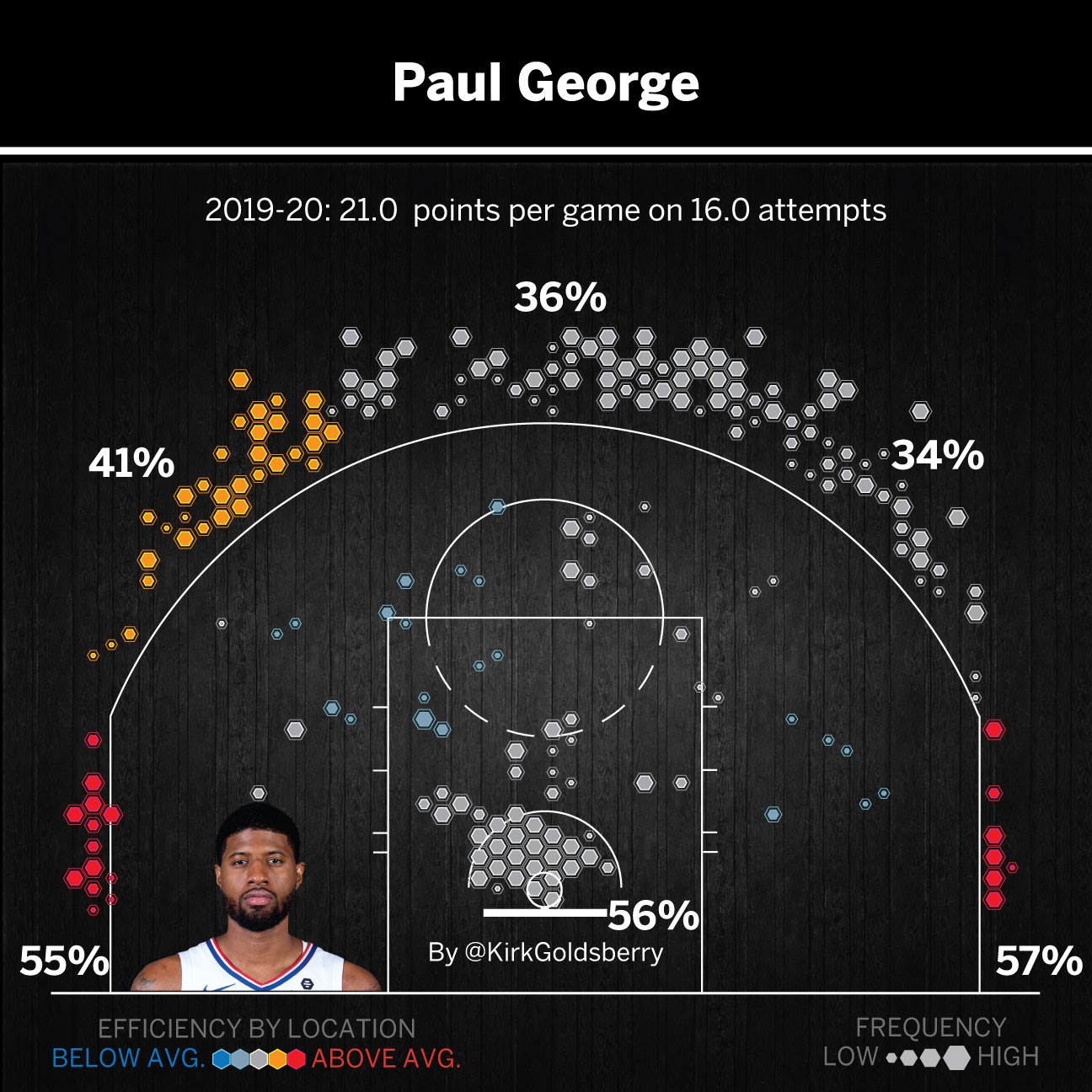 If there’s a concern, it’s George’s aggressiveness. He has fallen more in love with his jumper over time, becoming less interested in attacking the rim. This season, he has set a career high in 3-point rate and a career low in shots in the paint. His 2019-20 shot chart resembles that of a 3-point specialist, but there will be moments when his team will need him to be more than that.

There’s no questioning Leonard’s playoff reliability at this stage, so that leaves George as the Clippers’ biggest X factor. Leonard and the Raptors won it all last year with massive contributions from vets such as Marc Gasol, Serge Ibaka and Kyle Lowry. If the Clippers are going to take the title, that secondary burden will fall mostly on George.

Dwight Howard: Can he match up with the top West contenders?

Is Dwight Howard still good? At age 34, the former MVP candidate isn’t starting and is posting career lows in minutes, points and rebounds. Still, it’s alluring to think he might have something left in the tank and can rediscover some of his old magic as he settles back into Orlando.

In his eight seasons with the Magic, Howard averaged 18 points and 13 rebounds per game. He led the league in rebounding four times and blocks twice, but his career has gone downhill ever since. It is not uncommon, though, for aging stars to morph into meaningful contributors on championship teams. Marc Gasol — who at 34 had a few great playoff games to help the Raptors beat the Bucks and the Golden State Warriors — is a prime example. Could Howard do something similar?

But Howard will have to play better than he did in the regular-season matchups between the two Los Angeles squads. In the 38 minutes Howard played over three games, the Lakers were 13 points per 100 possessions worse than when Howard sat — with the offense tanking in the minutes he was on the floor. Given the upheaval in their backcourt, the Lakers might not be able to afford to only go small throughout a playoff series. That makes Howard’s finding some kind of offensive fit even more important.

Russell Westbrook is enigma-wrapped inefficiency. He is at once one of the most talented and frustrating guards in the NBA, and he is the Houston Rockets‘ biggest swing piece in Orlando — assuming he safely enters the bubble and is ready to go for the playoffs following a positive coronavirus test.

Westbrook is one of the finest attacking guards in recent memory, but his issue has always been picking the right spots. Westbrook’s stubborn insistence on shooting ill-advised 3s has hurt his overall efficiency numbers for years. Somewhere around Jan. 16, 2020, Westbrook changed his approach. The results have been incredible:

Westbrook’s refined approach has made him an even more effective player. In those 19 games, more than half of his shots came on driving layups — as opposed to just 36% in his first 34 games, per Second Spectrum. Westbrook has thrived as Houston has gone all-in on microball, but the team’s overall success has not.

Houston lost four of its last five games before the stoppage, but perhaps the extended break has given head coach Mike D’Antoni time to iron out the kinks in the approach and find strategies that both elevate Westbrook and play winning basketball. We’ll see.

The Utah Jazz are going to need Mitchell to play the best basketball of his career. Mitchell is 23 and one of the league’s best young scorers, but is he ready to lead a team deep into the Western Conference playoffs? Without the injured Bojan Bogdanovic, Utah’s second-leading scorer this season, Mitchell will have to find ways to increase his scoring in the face of increased defensive attention. It’s a tall task.

Mitchell is one of the few young scorers who thrives in the midrange. His elbow jumpers and his floaters are reliable, and both will be key in playoff matchups. 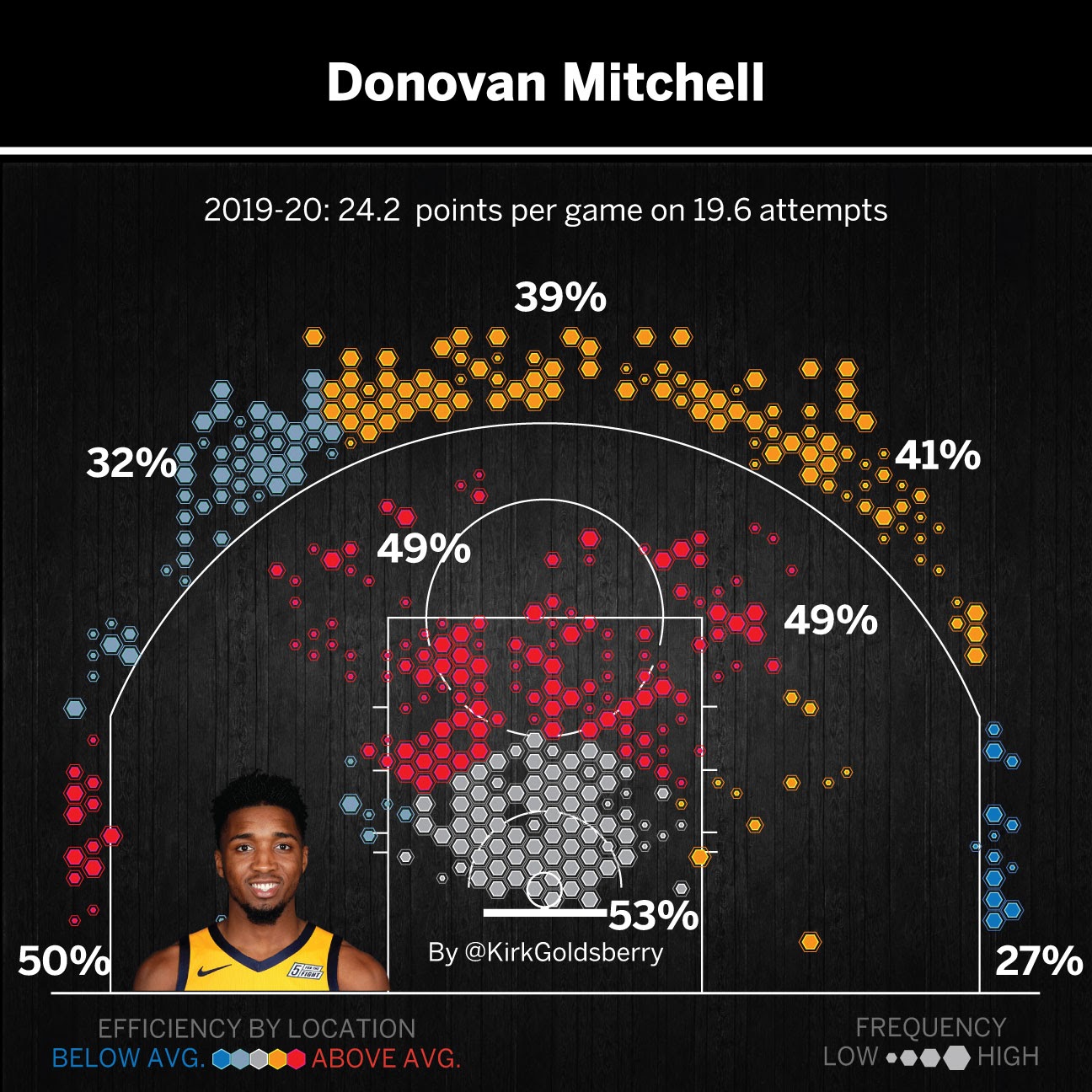 If the Jazz are going to be successful, they need Mitchell to be more aggressive.

If there’s a weakness in his scoring portfolio, it’s drawing fouls. He is a great free throw shooter (86%), but he doesn’t get to the line as much as some of the league’s other top scoring guards. Among the 36 players averaging at least 20 points per game, Mitchell’s 6.5 free throw attempts per 100 possessions ranks 28th.

One way for Mitchell to increase his productivity this postseason would be to embrace the dark arts of whistle-hunting … like some of the other bearded guards in the West.