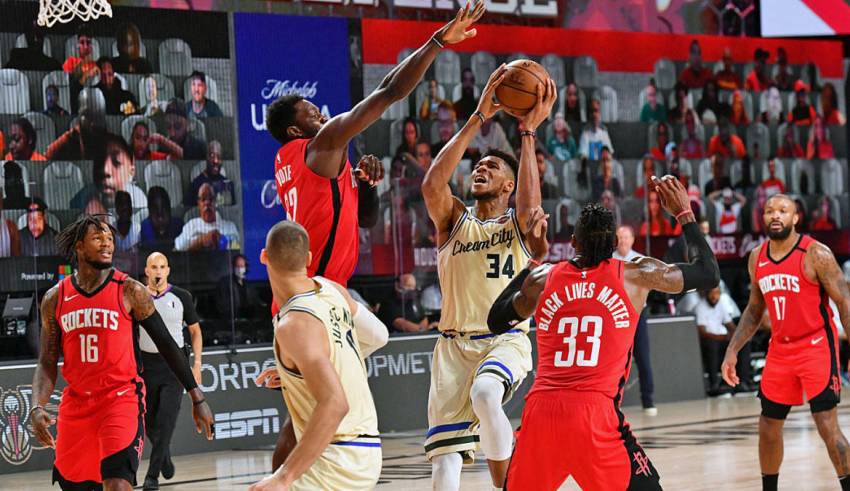 Day 4 of the NBA’s Disney bubble is in the books, and with most teams having played multiple games by this point, the playoff picture and the narratives that will follow it are beginning to take shape. A surprising team has jumped into the lead for the Western Conference’s No. 9 seed, two championship contenders duked it out in a potential Finals preview, and sadly, we’ve had our first major injury of the restarted season. Here’s everything you need to know about today in the NBA.

The Rockets fixed their defense

Houston’s thesis is based on three pillars: win the 3-point battle, the free-throw battle and the turnover battle. Everything else is immaterial if they just own those three categories. In service of those goals, they have eschewed the center position entirely. Not only does that give them more shooting, but it takes their worst ball-handler off of the floor to help limit turnovers, and it allows them to switch every screen defensively, effectively cutting off all open 3-point attempts for an opponent while also making them susceptible to more strips, tips and deflections from quicker defenders.

That strategy played out flawlessly in their battle with the Bucks. Milwaukee had 40 more points in the paint and 29 more rebounds than Houston on Sunday, and it didn’t matter because the Rockets forced 14 more turnovers, took eight more free throws and, most importantly, attempted 26 more 3-pointers. The Bucks are a fairly modern team in their own right. They take only 5.6 fewer 3-pointers on average than the Rockets. But Houston’s defense so effectively cut off their open attempts that Milwaukee not only took fewer 3s than they do on average but made only nine because of how few open looks they got.

This style of defense is inherently straining. It requires everyone on the floor, including James Harden, to run more than a typical scheme would suggest. Flying around the court is exhausting, especially for the wings who are also tasked with defending big men in the paint. The Rockets sacrifice size in the name of speed, but that only works when they actually use it. They were lazy on Friday against the Mavericks. They brought their A-Game against the Bucks. That was the difference. They may have allowed 116 points, but they won the battles that mattered, and ultimately, the game with them.

The Spurs haven’t missed the postseason since the Cretaceous period, though this season posed a greater threat to that streak than ever before. Entering the shutdown, San Antonio was on the bottom of a logjam in the standings, needing to pass the New Orleans Pelicans, Portland Trail Blazers, Sacramento Kings, and of course, the No. 8 seeded Memphis Grizzlies to get into the playoffs. Under typical rules, the odds of them doing so would have been slim.

But now, four days into bubble ball, the Spurs not only lead the pack for the No. 9 seed but have a real shot at sneaking up to No. 8 and taking away Memphis’ play-in advantage. The Spurs came to Orlando with the fifth-easiest schedule among bubble teams. Memphis had the seventh-hardest, and Portland, their likeliest competition for No. 9 now that New Orleans has dropped their first two games, has five straight games against real contenders before mercifully drawing the Nets in their finale. Death, taxes and the Spurs making the playoffs.

Dallas came up short in the clutch… again

Make that 18 losses by five points or fewer for the Mavericks this season, the most in the NBA. Remove games that included NBA-defined clutch situations and the Mavericks would have a 26-6 record. They have the most efficient offense in NBA history and the third-best net rating in the Western Conference, yet they’re likely going to finish with the No. 7 seed after falling in the fourth quarter yet again, this time to the Phoenix Suns. They led by 13 at the half, but coughed up their lead in the third quarter and couldn’t generate a good game-tying attempt in the final seconds.

The Mavericks are young. They have a coach with championship experience. They’re going to grow out of this. But by every metric except for record, Dallas should be a true contender. They aren’t, because yet again they’ve fallen short in the clutch. Playoff games are rarely blowouts. This doesn’t bode well for their postseason hopes.

One of the day’s big winners were… the Minnesota Timberwolves?

It sounds counterintuitive. Minnesota isn’t in the bubble. But the Nets are, and Minnesota owns their first-round pick… provided it falls outside of the top 14. It seemed nearly certain to do so until Brooklyn players started dropping like flies. With only Caris LeVert left to lead a group of backups, Brooklyn could’ve theoretically tanked its way out of the playoffs and into the lottery. The Wizards would have needed to make up only two games in the standings to force a play-in. Trade rumors have linked them to some of the biggest fish on the market. They have championship aspirations next season. A lottery pick would have been helpful for Brooklyn.

Alas, there will no be in-bubble tanking. The Wizards lost their opener to Phoenix, but Brooklyn’s loss to Orlando left the door ajar. The Nets slammed it with a win over Washington on Sunday. For all intents and purposes, they have now clinched the No. 8 seed in the Eastern Conference. The Timberwolves will likely get their pick now, when it is still quite valuable, as opposed to next season, when Kevin Durant and Kyrie Irving will presumably drop it into the 20s. A big win for a team that isn’t even playing at the moment.

The resounding success of the bubble’s first few days made the sobering reality of Sunday that much more jarring. Jonathan Isaac was the first player to suffer a seemingly serious injury. In all likelihood, he won’t be the last. Going from four months off back into high-level professional basketball so quickly was always going to increase the risk of injuries. Isaac already had red flags. Had the season not been extended, he wouldn’t have played at all for the Magic after suffering a serious knee injury in January. Hopefully, that makes this an isolated incident. But sadly, we need to grapple with the likelihood that more soft-tissue injuries are coming.