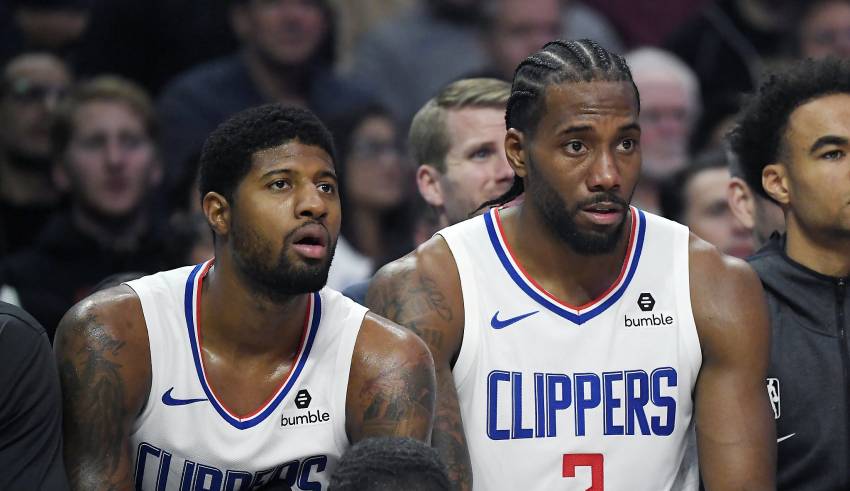 One man’s power rankings through one-quarter of the NBA season, based on potential to win the title:

1. L.A. Clippers: You didn’t care to watch them Friday night, when they got blown out in Milwaukee, but these things happen. It’s all about the long haul for coach Doc Rivers’ team, which means liberal rest for Kawhi Leonard and Paul George, and they could easily be the healthiest, most capable team at the finish. (Consultant Jerry West claims those two aren’t just the best duo in the league, but the two best players, period. That’s surely debatable.) Add the team’s tough defense and lights-out scorer Lou Williams, and this is a team without weakness.

2. L.A. Lakers: Around Staples Center, they’re saying LeBron James has never been better. That’s not quite true, but his play — and in particular his formidable partnership with Anthony Davis — has turned this franchise into a powerhouse. James has been energized and supremely motivated at both ends of the floor, and he can carry a team like no one else. The team defense is excellent, as well, with shot-blocking rim protectors in Dwight Howard (yes, it’s true) and JaVale McGee. Rajon Rondo, one of the league’s most creative point guards when he believes in his team’s mission, needs to stay healthy. (Rondo left Friday night’s game against Portland with a hamstring issue.) Crucial factor: The team’s quick start has taken the pressure off head coach Frank Vogel, who has instilled that defensive mentality, and warded off rumors about assistant Jason Kidd angling for the job.

3. Milwaukee: Clearly the class of the East until further notice and unquestionably a threat to win it all. Big games always come down to the best player on the floor, and no matter what they’re saying in L.A., Giannis Antetokounmpo is king. He turned 25 this week, a superstar (and defending league MVP) just entering his prime, and the team is flourishing around him. Antetokounmpo recently lamented the absence of Malcolm Brogdon, deemed not worthy of a contract extension by Bucks management, and that could be telling later on; he’s infinitely more reliable than Eric Bledsoe. Refreshing: In the manner of Damian Lillard, Antetokounmpo isn’t interested in creating super teams or teaming up with his friends. “My competitive nature is so high that when I go and practice (with other stars), I can’t do it,” he told The Athletic. “I want to play for 20 years and just play, and then make friendships at the end.”

4. Philadelphia: The 76ers are big, rangy and totally committed to defense, a pretty solid formula. Slowly, they’re trying to figure out the inside spacing when Ben Simmons tries to operate around Joel Embiid and Al Horford. It works against most teams, but in the playoffs, they’re going to miss Jimmy Butler’s let-me-take-over mentality in a big way. Because the team lacks outside shooting, Embiid spends a lot of time firing 3-pointers. Bad idea. He’s not that reliable from deep, and he’s built for the post with his strength and impeccable footwork.

5. Boston: Kyrie Irving’s absence has been a blessing, in terms of chemistry, and it has freed Jaylen Brown and Jayson Tatum to develop their All-Star potential. Brown is becoming one of the best two-way players in the league, and the return of Gordon Hayward (hand fracure) will only strengthen the half-court scheme. In the end, the Celtics will be hurt by their lack of a first-rate big man — but that won’t be an issue until, say the Eastern Conference semifinals. Brad Stevens is a superb coach, and there was a crucial addition in Kemba Wallker, a deadly shooter who fosters harmony, not discord, among his teammates.

6. Denver: Every time you read a quote from coach Mike Malone, he’s furious about something. The Nuggets don’t always look motivated, Nikola Jokic seems to have regressed, and although Jamal Murray desperately wants to be that guy, the team doesn’t have a consistent go-to shooter when it matters. The bulky Jokic is taking some heat for his offseason plan to gain weight — he feels it makes it easier for him to compete with opposing behemoths — but it’s unwise to doubt a center with his passing ability and soft touch.

7. Houston: The list of potential champions pretty much stops at six. Miami, Toronto and Utah will be entertaining playoff stories before they hit the ceiling. Luka Doncic’s astounding talent will give Dallas fans a few thrills. We mention Houston because it feels awkward to leave out James Harden and Russell Westbrook, doomed as that partership might be. Strange brew? Westbrook recently scored a triple-double despite shooting 7-for-27 from the floor. Harden has posted 3-point disasters of 2-for-18, 2-for-16, 2-for-15 and 4-for-20, so far. Recent development worth noting: Opponents are double-teaming Harden from out beyond the arc, refusing to let him win a game by himself. Can you imagine Harden taking only three shots in a half, none from 3-point range? That happened Thursday night against Toronto’s double-team strategy — but the Rockets still won, Harden (an excellent passer when he sets his mind) dishing off to open teammates.

• Two players staying in character Friday night: Chris Paul, who never misses a trick, and ex-Warrior Jordan Bell, who can have his knucklehead moments. With Minnesota’s Karl-Anthony Towns about to shoot the second of two free throws against Oklahoma City with 1.1 seconds left, T-Wolves coach Ryan Saunders inserted Bell into the game. Noticing that Bell had his jersey untucked, Paul quickly alerted the referees, and a delay of game was called — Minnesota’s second of the night. That meant a technical free throw for Danilo Gallinari, who cashed in to cut Minnesota’s lead to 121-120. Finally able to shoot that second free throw, Towns made it — but Steven Adams fired a John Elway-like bullet pass the length of the court to Dennis Schroder, who scored a layup to send the game into overtime. Oklahoma City prevailed, and credit Paul with a sharp-eyed move.

• Colleague Scott Ostler made a convincing Rookie of the Year case for the Warriors’ Eric Paschall, who has entered that discussion due to the injuries suffered by Zion Williamson and Ja Morant. If either of those two players has a dominant second half, Paschall has no chance. Otherwise, Golden State fans should monitor the progress of two Miami players, Kendrick Nunn and Tyler Herro, along with Washington’s Rui Hachimura, Chicago’s Coby White, Memphis’ Brandon Clarke, New Orleans’ Jaxson Hayes and Charlotte’s PJ Washington. A number of lottery picks, including the Knicks’ RJ Barrett, Atlanta’s De’Andre Hunter and Cleveland’s Darius Garland, haven’t gained much notice so far.