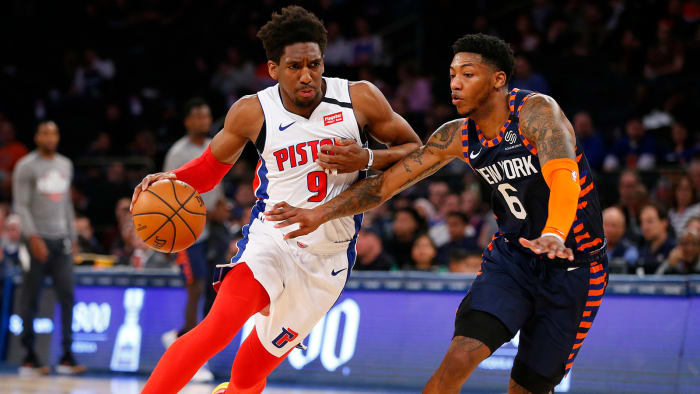 Golden State Warriors guard Chasson Randle says he’s comfortable working anywhere. In the context of basketball, that’s meant playing professionally in the Czech Republic, Spain and China. He’s also bounced between the NBA and G League, spending time with the 76ers, Knicks, Wizards and now, Warriors. But in the midst of the coronavirus pandemic, he’s also finding a way to be productive in every nook-and-cranny of his girlfriend’s one-bedroom Bay Area apartment.

In addition to his physical workouts, Randle, a Stanford graduate, is stretching himself academically as he studies everywhere from his girlfriend Terilyn’s desk to sitting on the floor to utilizing their kitchen counter. Randle recently completed an online course called “Fashion Essentials,” offered by Yellowbrick, a digital platform that works with universities and industry experts and offers short-term classes that happen to be strongly linked to NBA player interests.

Randle is not alone in enrolling in the program. More than 35 NBA players—including names such as Andre Drummond, Lou Williams and Zach Collins—have joined him and are taking classes with Yellowbrick, doing so in a range of topics such as “Fundamentals of Global Sports Management,” “Music Industry Essentials,” “Sneaker Essentials” and “Streetwear Essentials.” Along with their Yellowbrick partnership, the NBA also recently offered a MasterClass subscription to its players, giving them access to hundreds of video lessons from top experts across a wide range of industries. (As an example of the quality of MasterClass instructors, Stephen Curry teaches a class on shooting where he also offers in-game execution tips).

Other players have taken advantage of the academic and business world in more individual ways. Nets forward Garrett Temple, for instance, is currently studying for his LSAT; Trail Blazers guard C.J. McCollum has spent time working on his real estate portfolio; and Raptors guard Norman Powell is both brushing up on his sign language and learning Spanish through online courses, to name just a few.

“We’re excited about the number of guys that are really utilizing this time in a serious way and thinking about their life outside of basketball,” says Greg Taylor, the NBA’s senior vice president of player development.

Galloway was the NBA’s first known player to enroll in the Yellowbrick program that so many of his peers are now taking. He and a cousin discovered it last year when they were looking to get involved in short-term programs that could provide a long-term educational impact. The Saint Joseph’s graduate enrolled in its “Sneaker Essentials” class and says he benefited from its self-directed, relaxed pacing. He finished the course last year, obtaining his certificate of completion from New York’s Fashion Institute of Technology, and started telling others, including those within the league office, of it shortly after.

Taylor describes the Pistons guard as a “bonafide sneakerhead,” meaning that Galloway’s recommendation of the program came as a “real level of endorsement.” The 28-year-old guard says it’s beneficial for people of all ages, especially those who might not be able to obtain four-year degrees. Just last month, Galloway partnered with the company to launch a scholarship to help others take part in the program free of charge and expose students to information about fashion, sports and sneakers.

Throughout the NBA’s hiatus, the Pistons guard is continuing to get his “LG Kicks” brand off the ground. Galloway’s wife, Sabrina, has pushed him to continue working on his business plan for the brand. He’ll be a sneaker free agent this summer and is looking forward to continuing to make headway with the industry.

In recent weeks, Galloway also taken part in a number of calls with venture capitalists and he enrolled in an National Academy of Sports Medicine course to become a certified trainer. “Just using your platform to the best of your abilities and not taking it for granted,” he says of all his activity. Keeping his soon-to-be two-year-old son, Langston Jr., busy is another task he’s been juggling throughout workouts and all the aforementioned learning.

Amid the countless challenges associated with the COVID-19 pandemic, Taylor says his team at the NBA offices sees the league’s sudden break as an opportunity to “deepen what has been our ongoing work in player development.” Throughout the calendar year, they routinely provide players with guides and resources, but they wanted to make more things known during the current wave of uncertainty. Among other initiatives, they’ve sent players resource guides loaded with a variety of information including podcast and book recommendations, to notes on how to effectively spend one’s time. Mental wellness and health is another are of focus.

Galloway says that NBA’s “new age of players” is unique because of the wide range of off-court interests and curiosities that players have. Taylor notes that he sees the breadth of activities that players are currently taking part in as a further reflection of the era.

“We know that there are untold stories of our guys that really recognize that basketball is what they do, it’s not who they are,” he says. “That they are actually committed to developing all kinds of skills and life experiences and really being the same life-long learners that everybody else is in the world.”

“We’re only guaranteed the day that we get, so every day I’m trying to pick up information,” Randle says of his mindset.

The Warriors’ guard is in a unique circumstance compared to many of his peers. Randle spent most of the 2019-20 NBA season in China, playing with the Tianjin Pioneers. He left after the CBA suspended its season during its Lunar New Year break, leaving swiftly in an effort to ensure he wasn’t stuck in the country if global borders tightened.

In early March, Golden State signed Randle to a 10-day contract. And while Randle says he “tried to run from” the coronavirus, the NBA suspended its season and established a league a memorandum in mid-March not long after he returned.

Randle has just a single day left on his first contract with the club. He adds that while he’s in regular contact with members of the Warriors, there are currently no guarantees about any future deals. “I’ve become used to living day-by-day,” he says. “As things go, I’m just going with it.”

Randle finished his undergraduate degree at Stanford in his just three years, majoring in African and African-American Studies. He started his Master’s Degree in Psychology during his fourth year in Palo Alto, but only finished around three-fourths of it before he started preparing for the 2015 NBA draft.

His thesis was on improving juvenile offenders’ re-entry into school systems. However, he’s also looking into getting into the real estate. Fashion is another of Randle’s passions, which made Yellowbrick’s “Fashion Essentials” class something that peaked his interest. The courses are self-directed and many are designed to be completed in a six-to-12-week period. But Randle recently finished it in just under three weeks, working on a range of assignments that included designing products to sourcing fabrics. “I was locked in,” he says. “Just nothing to do, nowhere to go. So I’m like, ‘Hey, I might as well do this and hash it out.’’”

This August, he plans on launching his clothing brand named “Vorhart,” which loosely translates to the Dutch word for perseverance. It will reflect not only his own story, but also the stories of others. “I think it’s something that’s definitely universal,” he says of its theme, adding that its initial collection will be modeled after the African Ndebele tribe’s “perseverance through colonialism.”

His basketball journey has been a global whirlwind, with the NBA’s stoppage being another variable. He’s grateful, though, for the experiences he’s been apart of and the knowledge of he’s accumulated along the way.

“With this time I wanted to make sure that I was learning something,” Randle says. “Giving myself an opportunity to keep expanding, to keep growing.”