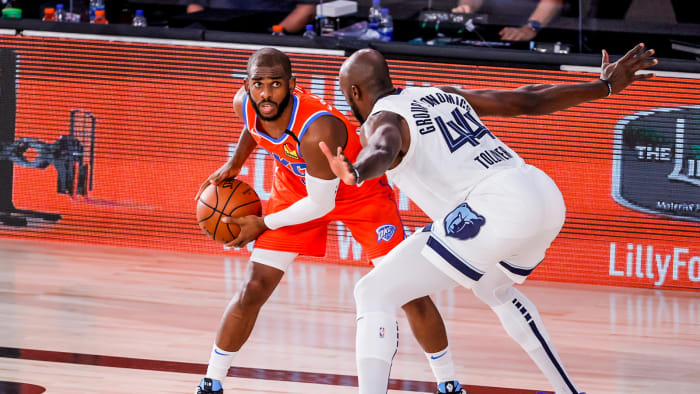 We’ve pushed through a wave of rested starters and stealth tanking over the last week, and we’ve been rewarded with what’s frankly a fairly fascinating playoff bracket. The Lakers could have to battle a vastly overqualified No. 8 seed in round one, and their Los Angeles counterpart faces one of the greatest phenoms in recent memory. There’s former teammates facing off out West and a feud reenergized in the East. Even with two snoozers in the junior varsity conference, there’s plenty of good basketball to keep us satisfied in the coming weeks.

So which series are we most excited to see when the playoffs begin on Monday? We at The Crossover ranked the most exciting postseason series below.

This may be a bit of a curious pick given Los Angeles’ standing as a significant favorite, but the talent on display is simply too hard to ignore. Kawhi Leonard and Paul George have been hilariously efficient in the bubble, soothing any panic over a lack of cohesion on the roster. But to be honest, Leonard and George are largely known entities. Dallas provides the real intrigue.

Just what exactly will Luka Doncic do in his first playoff series? It’s hard to place any sort of limit on the Slovenian sensation. Doncic has already ripped off a 30-20-10 performance in the bubble, and he dropped 40 on Phoenix (RIP) two days prior. Kristaps Porzingis is also healthy and spry, and Los Angeles doesn’t quite have the personnel to cover the 7’3″ Unicorn. Leonard and George are two All-Defense wings squaring off against the most efficient offense in NBA history. Something’s got to give. It’s likely Dallas’ offense will fade when push comes to shove, but there’s no guarantee. Perhaps Doncic’s first extended playoff run will come far sooner than anyone expected.

This series of familiar foes could very well take the top spot if for no other reason than sheer competitiveness. Oklahoma City won two of three over Houston in the regular season, and with Russell Westbrook out at least a few games, the Thunder have a legitimate chance at pulling off an upset. Oklahoma City has a three-headed monster in the backcourt. Steven Adams should feast on the offensive glass. Billy Donovan may not have the deepest rotation in the league, but the Thunder are certainly greater than the sum of their parts.

Then there’s the obvious emotional element at play. The Rockets were one Chris Paul hamstring injury away from the Finals in 2018. Last season marked a second-round exit, and Paul was dealt to Oklahoma City in what had to be at least a slightly bitter divorce. Paul is one of the most competitive players in the league. He’s not one to forget a slight. Defeating James Harden and Co. in the playoffs could serve as the highlight of his career.

Paul still faces a slight uphill climb, even if Westbrook misses the entire series. Harden is the clear best player on the floor, and he’s in the midst of a dominant scoring stretch in Orlando. Houston’s halfcourt defense is the best in the bubble, and Mike D’Antoni’s small-ball, switch-everything scheme has been executed with aplomb. Let Steven Adams post at will. The Rockets don’t care. Barring a rash of injuries, it’s hard to see Houston’s experiment ending before facing LeBron and the Lakers.

It’s a true shame Ben Simmons will miss the rest of the postseason, especially considering this round one matchup. But this series still brings plenty of intrigue, largely due to the stylistic disparity on display.

These two teams are effectively Bizarro World versions of one another, creating a serious headache for both Brett Brown and Brad Stevens. The Celtics are a fine-tuned machine, often sporting five playmakers and a healthy supply of outside shooting. Philadelphia relies on brute force, either feeding Joel Embiid or using Simmons to punish teams in transition. The Sixers have been a maddening team all season, and things weren’t exactly smooth before Simmons’ injury. But their sheer size and athleticism made for a fearsome round one opponent. A first-round exit for Boston wasn’t entirely out of the question.

Can Philadelphia steal a series without its star point guard? There’s little evidence it can be done, but there is a blueprint. Philadelphia will continue to play bully ball, and Al Horford’s performance will be critical. If Horford is near his Boston form, the Sixers have a twin towers that can expose Boston. We haven’t seen that version of Horford for much of 2019-20. Don’t count on a sudden resurgence in round one.

We could vault this series to the very top if it’s Lakers vs. Blazers, and only the dreadful East series would rank below Lakers vs. Grizzlies. Let’s split the difference. As for Ja Morant and Co., Memphis will face an early exit at the hands of the Los Angeles juggernaut if it advances to the first round. No Jaren Jackson Jr. doesn’t help matters, and there just isn’t the talent present to compete. A sweep would likely await, though at least Morant could get some playoff experience under his belt. You know the upcoming Rookie of the Year won’t be intimidated by his Hall-of-Fame opponents.

Could Damian Lillard and the Blazers truly upset the Lakers? It’s fairly unlikely. Portland’s defense has been swiss cheese in the paint in 2019-20, and its interior issues have continued in Orlando despite Jusuf Nurkic’s arrival. Expect Anthony Davis to feast as he did against Portland in the 2018 playoffs. Still, it’s not exactly as though the Lakers would cruise. Los Angeles has serious backcourt issues without Rajon Rondo and Avery Bradley, which isn’t exactly an encouraging proposition against a guard of Lillard’s caliber. We’ve already seen plenty of magic from Lillard in Orlando. Perhaps he has more theatrics in store in round one.

Neither of these teams have the flash of a true Finals contender, but this remains quite the interesting matchup nonetheless. Both Denver and Utah sport elite big men with limitations on the opposite ends of the floor, and the rest of their respective rosters aren’t exactly foolproof. Donovan Mitchell could very well be the best player of the series. There’s a universe where the same applies to Michael Porter Jr. Neither team is at a crossroads, though there could be a simmering of discontent (moreso for Utah) with another early exit.

Who should have the upper hand in what could potentially be a seven-game series? Denver deserves to be given the benefit of the doubt after an impressive regular season, though the matchup could be as close as the Nuggets’ double-overtime win on Aug. 8. Jokic has already proved his playoff mettle in a pair of outstanding series last year, and Utah ultimately feels one scorer short. Consider Denver a slight favorite in the mountain time matchup.

There is, of course, the potential for a brief T.J. Warren-Jimmy Butler spat in this Eastern Conference series, but the actual basketball should be quite intriguing in what could be the most competitive matchup of round one. Indiana continues to overcome any obstacle in its path, most recently Domantas Sabonis’ foot injury. Nate McMillan doesn’t seem to care. He’s engineered Indiana’s offense around Warren amid a career-best stretch, with Victor Oladipo serving as a slasher and secondary playmaker. Indiana’s ceiling is well-defined, but a minor round-one upset isn’t out of the question.

It would be a shame if Miami’s season ended before facing a top Eastern Conference team in the second round. The Heat’s youngsters have grown up rapidly this season, and the entire roster is littered with success stories. Bam Adebayo is thriving as a true point center. Duncan Robinson is the game’s best shooter after playing in Division III. We credited McMillan above, and Erik Spoelstra is similarly industrious. He wrings the most out of every roster. Each player is placed in a position to succeed. Heat culture never disappeared after the LeBron era. The talent is now matching the organizational infrastructure.

Another year marks a pair of relative walk-throughs for the top teams in the Eastern Conference, with both the Bucks and Raptors likely to drop at most one game against the No. 7 and No. 8 seeds. So why does this series avoid the cellar? Well, largely because of Giannis Antetokounmpo, who at times is reminiscent of peak Shaq as a purely physical force. There’s also some slight intrigue in seeing Markelle Fultz lead Orlando’s backcourt, and head coach Steve Clifford could very well steal a game. Regardless, expect plenty of second-halves spent on the bench for Antetokounmpo.

Can the Nets just be allowed to go home at this point? They’ve acquitted themselves better than expected with a skeleton crew in Orlando, and Jacque Vaughn has proven himself as a true head coach candidate for Brooklyn. Why ruin the positive trip with a beatdown at the hands of the defending champs? The Nets will be sent home soon enough.