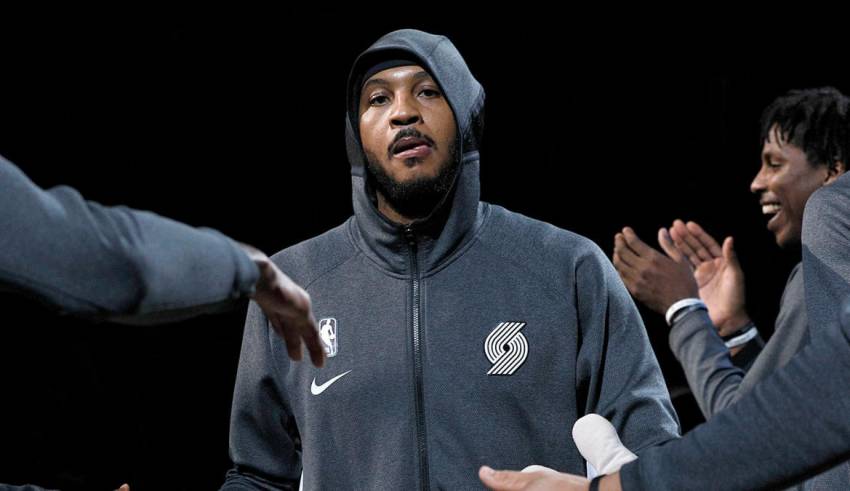 We’re a quarter of the way into the 2019-20 NBA season, and there’s been no shortage of spicy storylines, both on and off the court. The league’s longest playoff streak is in jeopardy, while James Harden has drawn comparisons to some of the game’s greats for his impressive offensive output. Plus, a 10-time All-Star is looking to prove that his tank isn’t empty.

Here’s a look at some of the most interesting current narratives from the NBA season, and whether or not they’re worth buying or selling.

Buy or Sell: Carmelo Anthony will be in the NBA after this season

Buy. Anthony has made it clear that his current run with the Portland Trail Blazers isn’t a “retirement tour,” and he fully plans to continue his career past this current season. Anthony was out of the league for over a year in between his stints with the Blazers and Houston Rockets, and he isn’t interested in more time away.

“This ain’t a damn farewell tour,” Anthony said late last month. “My love for the game don’t stop. I don’t know where this ‘farewell tour’ thing came from. I’ve never talked about a farewell tour. I know what I can do and I believe in myself. When a farewell tour comes, it comes. That’s not something I think about. I’m not thinking about retiring right now. I had during this past stretch over the summer … But ain’t no retiring in my mind. I believe in what I have left.”

Since he’s been with the Blazers, Anthony has shown that he is still capable of logging legitimate minutes and scoring consistently, as he has averaged 17.7 points on 46 percent shooting from the field (and 37 percent shooting from long distance) in 30.7 minutes per game in his six starts for Portland. As an offensive option, Anthony is clearly still viable, and he appears to be in solid shape. There are probably a couple teams across the league’s landscape currently kicking themselves for not taking a flyer on Anthony earlier.

He will obviously have to continue producing in Portland, but barring a major injury issue, Anthony being back in the NBA next season seems very likely.

Buy or Sell: James Harden is a better scorer than Kobe Bryant

Sell. James Harden has been a simply amazing scorer. In fact, Rockets general manager Daryl Morey considers him a better scorer than Michael Jordan. But how does The Beard compare to Kobe Bryant? As far as career stats go, both are eerily similar:

Despite all of Harden’s greatness on offense, we have to side with the Black Mamba on this one. Don’t get me wrong; Harden is an absolute monster on the offensive end, but so was Bryant, and Bryant was able to get it done in clutch situations — something that Harden has been unable to do up to this point in his career. This isn’t simply to say that because Bryant has championship rings and Harden doesn’t he’s a better scorer, but when you have two players as complete offensively as those two, it’s noteworthy in a comparison that one was able to use his otherworldly offensive gifts to [help] lead a team to multiple titles, while the other has repeatedly struggled in postseason play.

Both players can do everything on the offensive end — score from the perimeter, put the ball on the floor, absorb contact, and finish at the rim. But Bryant is a tad taller, which gives him an edge when elevating over defenders, or taking fadeaways from the post. Plus, Bryant’s game was more aesthetically pleasing, as he relied less on trips to the foul line for his point production. Call it a gut feeling, but with a game on the line and one basket needed, I’d feel much more confident with the ball in Bryant’s hands.

Buy or Sell: The Spurs will miss the playoffs for the first time in two decades

Buy. The Spurs haven’t missed the postseason since 1996-97 — the season before they selected Tim Duncan with the top overall pick in the draft. This is the longest active streak in the league by far. But, all good things must come to an end, and for the Spurs, the time has finally come for a lottery landing.

San Antonio started the season strong at 5-0, but it has struggled since and gone just 2-8 over its last 10 games. The Spurs have one of the league’s worst defenses, and are limited on the offensive end as they simply lack the top-tier talent that a lot of the other teams in the Western Conference have. Through 21 games, they’re already well outside of the playoff picture in the West at 7-14, and they don’t appear poised to make a run up the standings.

As long as Gregg Popovich is on the sideline you can’t count the Spurs out, and they could make some sort of a trade that revitalizes the team and propels them into playoff positioning. But as it stands now, it looks like the Spurs will be on the outside looking in when the postseason starts, for the first time in a long time.

Sell. The Celtics’ strong start to the current season surprised some that expected them to take a step back after losing veteran All-Stars Al Horford and Kyrie Irving in free agency. Instead of taking a step back, though, the opposite has occurred as the Celtics have actually looked better than they did last season, thanks largely to the All-Star-level play of Kemba Walker (and Gordon Hayward prior to his hand injury), and the continued development of Jayson Tatum and Jaylen Brown.

While the Celtics have been impressive and have the chance to make some real noise in the East this season, they’re not better than the ’17-18 iteration of the team that lost to LeBron James‘ Cleveland Cavaliers in the Eastern Conference finals. That team was super deep, as evidenced by the fact that they were able to advance without Irving and Hayward, who were both dealing with injury issues, and they benefited from solid frontcourt play from Horford and Aron Baynes. The current Celtics squad doesn’t boast the same depth, especially in the frontcourt where Enes Kanter and Daniel Theis don’t pack the same punch. These Celtics are really good, but just not as good as the team two seasons ago.

Buy or Sell: Giannis Antetokounmpo is the early MVP front-runner

Buy. Antetokounmpo took home the hardware last season, but his MVP campaign from a year ago apparently wasn’t his ceiling as a player, as he has been even better so far this season. He has improved his per game scoring, rebounding, and assist numbers, and he has also improved his long-distance shooting. He is taking 4.9 3-pointers per game this season (compared to 2.8 last season) and bumped his percentage up to near 30 (up from 25 percent last season). Plus, Antetokounmpo has propelled the Bucks to the top of the Eastern Conference, just as he did last season.

There will be no shortage of competition for the award, as LeBron James and Luka Doncic have both made solid early cases, while James Harden continues putting up crazy numbers in Houston. But, Antetokounmpo won the award last year, and he has only improved. Plus, the Bucks are playing as well as any team in the league right now. Thus, it’s fair to consider Antetokounmpo the MVP front-runner a quarter of the way through the season.