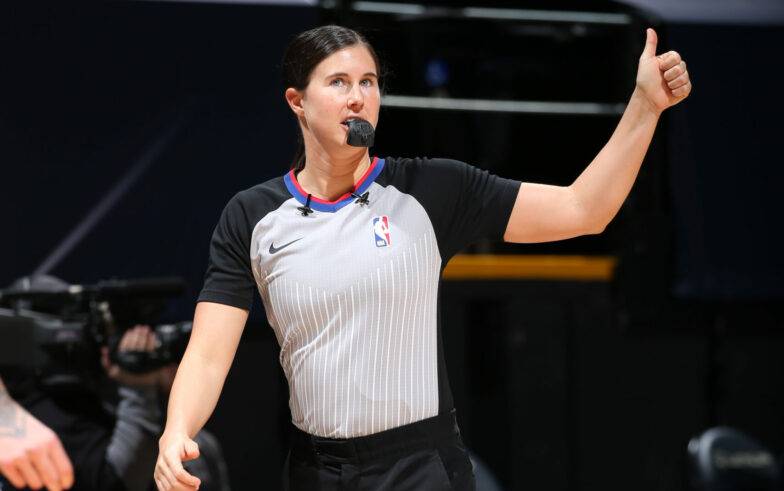 With more female referees now in the NBA than ever before, it was only a matter of time before two women would be scheduled to work the same game.

And Monday is that day.

Natalie Sago and Jenna Schroeder make up two-thirds of the crew assigned to the Charlotte at Orlando game, the first time in NBA history that two women were assigned to work a regular-season contest together. Sean Wright was picked to be crew chief, Sago the referee and Schroeder the umpire.

Tonight, for the first time in NBA history, two women will be on the officiating crew. Congrats Natalie Sago and Jenna Schroeder, we can’t wait to watch you work!

Sago and Schroeder have worked games together before; they were part of three-woman crews in the G League. But at the NBA level, it’s a first — and it’s a game they’ve been looking forward to since they saw it on the internally distributed schedule a month ago. The crews for games are not announced publicly until 9 a.m. Eastern on game days.

“This is a big deal,” Schroeder said. “It’s like my feminist dreams come true, that like my personal values are colliding with my professional values and it’s awesome.”

The NBA has used 76 officials so far this season; seven are women, already the most to work games during any season in league history. Lauren Holtkamp-Sterling, Ashley Moyer-Gleich, Simone Jelks, Danielle Scott, Dannica Mosher, Sago and Schroeder are all working games this season; Scott and Mosher are non-staff, the other five are members of the full-time NBA officiating roster.

“It’s so cool,” Sago said. “All of us, we’re so happy and excited to work together. We just have a good group of females, we’re all close, we have great relationships and we share these moments.”

The original schedule called for another crew with two women for a game later this week. That lineup has since been switched, but Sago is certain this game won’t be the NBA’s last with multiple female refs.

“It’s amazing,” Sago said. “I’m just proud to be part of an organization that promotes people to do the job based on our abilities, not on our gender, race, ethnicity, those types of things.”

It’s not lost on Sago or Schroeder that this game comes amid a flurry of historic days for women, in the sports world and otherwise.

Kamala Harris was sworn in last week as the first female Vice President of the United States. Sarah Thomas will be the first woman to be on a Super Bowl officiating crew when she works the Tampa Bay-Kansas City game in Tampa next month. Sarah Fuller made headlines this past college football season as a kicker for Vanderbilt.

“I wish my daughter was here to see this,” Schroeder said.