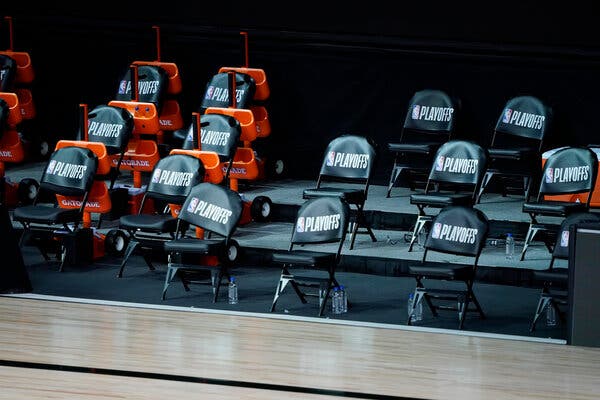 For the newly crowned N.B.A. champion LeBron James, living and working in the same place for more than three months “played with your mind” and “played with your body.” Phoenix Suns Coach Monty Williams marveled most at an enviable statistic — zero coronavirus-related postponements during the league’s grand sports and social experiment.

Adam Silver, the commissioner of the N.B.A., called it a triumph that required “extraordinary sacrifices by everyone involved,” along with “a bit of luck, honestly, too.” Seven months after halting play as the pandemic surged across the United States, the N.B.A. concluded its 2019-20 season in a restricted-access quarantine zone at Walt Disney World near Orlando, Fla., that became universally known as the bubble.

The league tested players for the virus daily. It imposed strict rules and occasionally doled out penalties to ensure that 113 pages of health and safety protocols were followed. Long bouts of isolation and the resultant mental and emotional strain prompted Rajon Rondo, James’s teammate, to deem this “by far” the hardest postseason of his 14-year career.

Yet it also worked. The bubble held for 96 days, and when players leaguewide refused to play in a gesture of civil rights protest during the first round of the playoffs, league officials and team owners pledged to do more to support social justice causes. The restarted season, which began amid considerable skepticism, ultimately delivered a televised spectacle with a Hollywood ending, as the Los Angeles Lakers — still reeling from the January death of the basketball legend Kobe Bryant — emerged with the franchise’s 17th N.B.A. title. It was James’s fourth.

Now thorny discussions loom between league officials and the players’ union to address an array of unknowns about next season. What is certain is that the players have been promised eight weeks’ notice before they have to start anew.

Silver has said he doesn’t expect the 2020-21 season to start before January. Michele Roberts, the union’s executive director, has said in multiple recent interviews that the delay may stretch into February. While there is a strong desire on both sides to see teams play in their home markets, preferably with at least a small number of fans admitted to games, it remains unclear how soon it will be safe to do so. Sports that have eschewed a bubble concept, such as the N.F.L., lurch from one coronavirus crisis to the next.

The 2020 N.B.A. draft is set for Nov. 18, and the league’s $180 million bubble allowed it to crown a champion for the 74th consecutive year while also satisfying some agreements with television partners. Yet there is much to resolve.

The league and the union must decide when to start free agency and how long they can hold out for a return to home markets before conceding that short-term regional bubbles may be necessary to play. Perhaps most crucially, they must establish a new salary cap and luxury tax amid the pinch of a $1.5 billion shortfall in projected revenue from 2019-20.

At least the sides head into this daunting off-season with the momentum that flows from finding a creative solution to stay operational. The lengths they went to do so were remarkable.

The N.B.A. was the first major North American sports league to suspend operations in March in response to the coronavirus outbreak. After a four-month stoppage, 22 of the league’s 30 teams were summoned to one site for the first time in league history. No one was allowed to leave the campus once inside without league authorization and submitting to additional quarantines upon re-entry, and fans were barred from the three game venues.

Each day, players, coaches and team staff members were tested and required to record their temperatures and other symptoms. They were also governed by social distancing regulations during meal times and leisure activities, and urged to wear masks around other people away from the basketball court. The formula succeeded in gradually hushing criticism that the N.B.A. was taking grave risks, primarily for financial motivations, by rebooting a full-contact indoor team sport amid a pandemic.

There was also pushback about the constraints from the inside — “I feel like when we got in the bubble, everyone was complaining about not wanting to be here,” Miami’s Bam Adebayo said — but players wanted to use the visibility of the N.B.A.’s comeback to support their social advocacy. In a period of great civil unrest in the country, Boston’s Jaylen Brown, Utah’s Donovan Mitchell, Indiana’s Malcolm Brogdon, Adebayo and several of their peers campaigned loudly against racism and voter suppression. Many spoke daily about George Floyd, Breonna Taylor and other Black people who had been killed by the police.

There were roughly 1,500 campus residents at the bubble’s peak. Although greater leniency was shown to players on mask-wearing than the rules detailed, the league managed to stage 172 regular-season and playoff games without a serious coronavirus threat. Quality of play, perhaps buoyed by the elimination of air travel, likewise exceeded expectations despite injuries that marred both the first round of the playoffs and the Miami Heat’s finals bid against James’s Lakers.

The Suns went home in August with an 8-0 record in seeding games that left them narrowly short of a playoff spot. But Williams, the head coach, pointed to what he deemed a far more impressive achievement: Silver’s Sept. 30 statement that the league had registered “no cases” of the coronavirus among representatives of the 22 teams and N.B.A. personnel who began reporting to the campus on July 7.

“When I got there, in my head I thought, ‘I don’t know how they’re going to pull this off,’” Williams said in a phone interview. “I kept saying that to myself.”

Williams was hardly alone in his skepticism, which was understandable given the rising positivity rates of coronavirus testing throughout Florida in July just as the N.B.A. was moving in. Yet an early description by San Antonio Spurs Coach Gregg Popovich, who said the bubble was “probably the safest place in the world,” quickly caught on.

In the buildup to the bubble, Silver worked closely with a special committee that included three players: Dwight Powell of the Dallas Mavericks, Toronto’s Kyle Lowry and Oklahoma City’s Chris Paul, the players’ union president. Powell said in an interview that union and league officials faced “a healthy fear in the preparation process” because they knew “people’s livelihoods along with their well-being was at stake.” On the three players’ first phone call after they were inside the bubble, Powell said: “Kyle, Chris and I all made it a point to say: ‘Wow. We’re really here. This is surreal.’”

The strongest league discipline for breaching coronavirus protocols resulted in Danuel House of the Houston Rockets being sent home during the second round of the playoffs for allowing an unauthorized guest — a woman who had worked on the campus — into his hotel room. Yet the only stoppage of bubble play was not health-related. The Milwaukee Bucks walked out before an Aug. 26 playoff game against the Orlando Magic in response to the police shooting of Jacob Blake in Wisconsin. That led to a three-day shutdown — with a cancellation of the rest of the season averted in part because players did not want to relinquish the platform to amplify their calls for social justice provided by the N.B.A. restart.

Talks among players to decide to continue the season were contentious, and further “difficult negotiations” between the league and the union, as Silver described them at a news conference, await for next season’s terms. The sides, though, could also use a meaningful break after a season that lasted a whopping 380 days.

Together they have weathered a costly dispute with the league’s partners in China after Rockets General Manager Daryl Morey posted a tweet in support of pro-democracy protesters in Hong Kong, then the January deaths of the former commissioner David Stern and Bryant, and then the pandemic and all its attendant complications.

It took a bubble with unforeseen durability, so sturdy that “bubble” is now a common word in the N.B.A. lexicon, to shepherd everyone through the past three months to fashion a finish to the longest, most turbulent season in league history.

Ian Mahinmi of the Washington Wizards didn’t even log any court time at Disney World because the team, without the injured Bradley Beal and John Wall, was focused on developing its young players. The Wizards, who started 0-7, were the antithesis of the Suns, but Mahinmi looked back on his experience with as much fondness as Williams.

“Whatever you want to say, it’s better to be in the bubble than outside the bubble,” Mahinmi said.