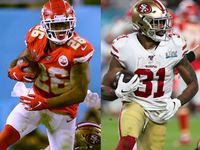 In the minutes following Kansas City’s victory over San Francisco in Super Bowl LIV, they found each other in the tunnel of Hard Rock Stadium.

Damien Williams, the Chiefs running back who tallied 133 total yards and two touchdowns, both in the fourth quarter of the win, located his former teammate, 49ers running back Raheem Mostert, and immediately embraced him.

After exchanging motivational messages, congratulations and well wishes, Williams suggested the two players, both undrafted players who spent time together with the Miami Dolphins in 2015, swap jerseys.

âDonât let this be the end of our journey.â
Damien Williams made sure to grab fellow undrafted RB, @RMos_8Ballâs jersey after playing on the biggest stage.@Chiefs | @49ers pic.twitter.com/SllDbJYlhK

Exchanging kits is a common tradition practiced between respectful opponents following regular-season games. But after a life-changing victory in the Super Bowl, it’s far less normal. After all, anything worn during the big game is automatically memorabilia and more special to the wearer.

Williams said on “Jimmy Kimmel Live” on Monday that his mother asked him where the jersey went after the game, to which Kimmel joked that Williams’ jersey is worth a lot more than Mostert’s now.

Regarding the whereabouts of the Chiefs RB’s jersey, Mama Williams can fear not. It’s on its way back to Kansas City.

Contemplated putting this on eBay ï¿½ï¿½ but this belongs to YOU and yours! You did your thing. Hand this down for generations! PROUD OF YOU BRO! Much love. #undraftedRBs @TooLoose26 pic.twitter.com/RL4oIgtQhr

The sportsmanship displayed last week between the two former Dolphins teammates in all facets was something special, but that’s not the only thing that now stands out about Williams’ and Mostert’s connection. Williams’ six scrimmage touchdowns and Mostert’s five scrimmage TDs this postseason were the first and second-most scrimmage TDs by undrafted players in a single postseason in the Super Bowl era.

With their historic postseasons settled, the only question left is whether Williams will send Mostert back his shirt in return. Or will to the victor go all the spoils?