May 26, 2020
Trending
Home NBA Mikal Bridges: One of the NBA's Most Versatile Players – Suns.com 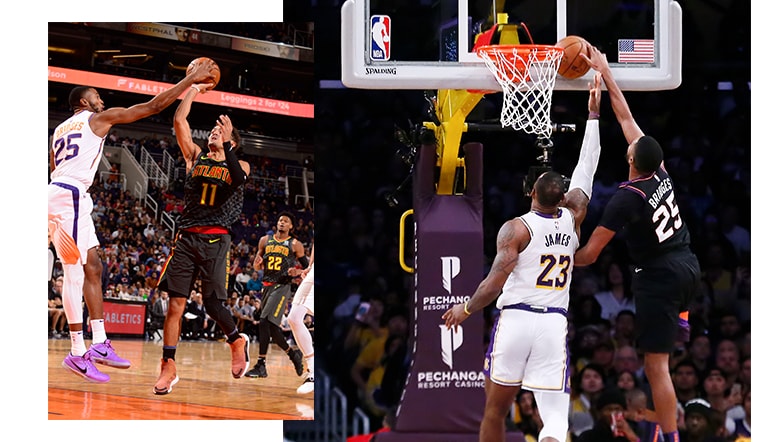 After posting the second-best steal-to-turnover ratio in the entire league  in his rookie season, Mikal Bridges immediately showcased the value he brings on the defensive end of the floor. But as he continues to develop his skillset, polish his game and adapt to Head Coach Monty Williams’ system, Bridges has proven that he’s already one of the most versatile players in the NBA.

Bridges’ defensive aptitude was clear early on last season when he was tasked with matching up against the top wings in the league on a nightly basis, but his role on defense has expanded even more during his sophomore campaign. From guards to forwards to centers, Bridges is now being asked to switch onto and defend virtually any player of every size with every skillset imaginable.

The basketball IQ required to do so means Bridges has to know the scouting report on every player on the opposing team and memorize Monty Williams’ entire playbook, since each time he switches to a new position, his spots on the court have to switch as well.

One might think that centers would possess an advantage over Bridges, a traditional wing who stands at 6’6”. However, Bridges is able to use his 7’1” wingspan along with his quick feet to hold his own, both in the paint and along the perimeter. No matter the situation, Williams has not only been impressed by Bridges’ willingness to accept the challenges, but also his ability to control the team on the defensive end.

“Most times, when you think about a guy who covers up mistakes on defense, you think of a big man, a seven-footer at the rim,” Williams said. “Mikal does it on the perimeter. Mikal covers up a lot of stuff, whether it’s switching onto a smaller guy, switching onto a bigger guy, guarding full court. He, in my opinion, is a developing lockdown defender. He’s not there yet, but he’s getting to the point where we feel like we can put him on a guy and he’s going to make it really hard for that guy to have an easy night.”

As teams around the league continue to play at a quicker pace offensively, and with stricter foul calls, the concept of a ‘lockdown defender’ has suddenly become a rare commodity in today’s NBA, but Bridges is excited for the challenge.

“In this economy of the NBA, it’s hard to defend,” Williams said. “I mean, you can’t put your hands on guys anymore. I don’t know if defenders are running from the offense or praising the Lord because now everybody’s just got their hands up in the air running around the court. So, he’s one of the guys that I see that has the ability to, within the rules, still have an effect on defense and cover up a lot of mistakes.”

Bridges currently ranks top 10 in the NBA with 1.5 steals per game, and he’s also the only player in the league averaging at least 1.5 steals with one or less turnovers per game. His work defensively along with his control on offense has allowed the Suns to control the tempo on both ends of the court.

While some younger players might be intimidated by the idea of going head-to-head against the opposing team’s top player, the second-year pro finds joy and embraces the opportunity to hold down some of the league’s top talent.

“I take a lot of pride,” Bridges said. “I just go there knowing that I’ve got four of the guys with me who are going to have my back so I can be aggressive. I just know my team have my back if I’m over aggressive.”

That versatility is now also materializing in Bridges’ impact on the offensive end. Monty Williams has seen vast improvements in his overall game and contributions on the court since arriving in Phoenix.

“From September until now, he just looks like, not a totally different player, but an improved player and his ability to adapt to situations,” Williams said. “Guarding twos, threes, he’s guarding fours, sometimes fives. Put him on the ball. He’s guards 94 feet some nights. He’s been able to hit shots and slash and he has just grown as a player and we hope it continues.”

Bridges was primarily viewed as a ‘Three-and-D’ prospect coming out of college, where he was a two-time National Champion with the Villanova Wildcats. While the three ball is consistently improving, he’s also showing the ability to put the ball on the floor and attack the basket.

“Just being aggressive,” Bridges said when asked about the key to his contributions on offense. “I’ve been putting in a lot of work with the coaches here. They just me ready and they put that confidence in me. If I’m open, shoot, don’t hesitate. Just having that mindset and now I’ve just got to mix it up. If they really run at me, mix it up and drive. Just try to put the two together.”

In the last month since February 5, Bridges is shooting a lights-out 53.6 percent from the field, 45.1 percent from deep and has yet to miss a single free throw on 14 attempts. Not only has his marksmanship from beyond the arc opened the floor for his teammates, but his elite slashing ability through the paint has led to more easy buckets while creating confusion for the opposing defense.

The growth that Bridges has shown on the hardwood as of late is not only impressing his coach, but his teammates as well as he is making life easier for them on both ends of the court.

After being in a reserve role in the team’s first 24 games this season, injuries and impressive play has propelled Bridges into the starting lineup where he is quickly proving that he belongs.

“I think Mikal is in the mindset that he wants to be a starter,” Williams said. “Any way that he can show and prove to the staff and his teammates that he is, I think he’s up to that challenge. That’s what I’m seeing from him. Whether it’s defense, knocking down shots, making plays, speaking out about the team. Those are all leadership qualities in my opinion.”

As Bridges closes out his sophomore season, Booker anticipates even more improvement on the horizon as the experience he is gaining at 23 years old will pay dividends in his overall development.

“There’s always room for improvement,” Booker said. “It only being his second year being thrown in the fire, thrown in so many different situations, he’s pretty much seen every position that he would ever think of playing in the NBA. He’s doing a tremendous job with that.”

Teams are now having to game plan for the versatility Bridges brings on both ends of the court and his confidence will only continue to rise as his young career unfolds.