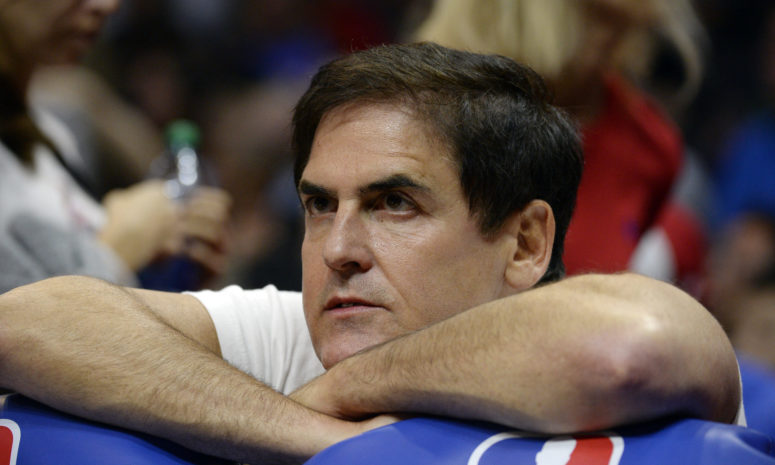 LOS ANGELES CA – OCTOBER 29: Mark Cuban, owner of the Dallas Mavericks, follows the action from behind the bench during the third quarter of the basketball game against Los Angeles Clippers at Staples Center October 29, 2015, in Los Angeles California. (Photo by Kevork Djansezian/Getty Images)

Dallas Mavericks owner Mark Cuban and Outkick the Coverage’s Clay Travis once again got into it over the NBA’s television ratings.

Much has been made about the NBA’s television ratings this year. The league’s ratings are down, though there are likely a number of contributing factors. The games have been played from July through September, which isn’t an ideal time. Summer months are usually bad TV ratings months and the league has to go head-to-head with football in September.

Still, millions of people are watching live games on TV, and there aren’t too many shows that can say that.

Travis has been a major critic of the NBA and its ratings. Cuban has often gone at him on social media. This once again happened on Saturday.

Hey Clay, I won’t try to educate you on ratings. We have the audience our advertisers want. But I do want to know what the AQH is for your radio show . If ratings are so important to you, let us know your actual ratings and why Fox Sports Radio doesn’t publish them for the public https://t.co/2KqwGy712w

Thing is Clay, self reported “ratings” aren’t ratings at all. But it is interesting that you want to include online media to suggest success for you, but not the NBA. I’ll ask again. What is your AQH for your radio show? Why would I come on if no one is listening ? https://t.co/bJcgKyhpfz

Did you forget that EVERY nba ratings article on Outkick mentions me multiple times ? So links get sent to me. But bottom line, it’s fun to troll you It’s hard to troll people who understand a topic. It easy and fun when they pretend to or are pandering to followers😁 https://t.co/Gg2FdxfN7o

Do you know the difference between Cume and AQH in ratings ? And let me ask you a question. Are more or fewer people watching sporting events on TV these days ? https://t.co/SBRHtnOiBR

This likely won’t be the last time these two go at it.

The NBA, meanwhile, is likely excited about its NBA Finals matchup possibilities. The Lakers clinched a Western Conference championship on Saturday night. Los Angeles is set to face either Boston or Miami in the NBA Finals beginning this week.

The Heat and the Celtics are scheduled to play Game 6 of their Eastern Conference Finals series on Sunday night. The game will go head-to-head with the NFL.

Andrew Holleran is the managing editor at The Spun.