April 10, 2020
Trending
Home NBA 'Malice at the Palace' facts you didn't know about on the 15th anniversary of NBA's biggest brawl – CBS Sports 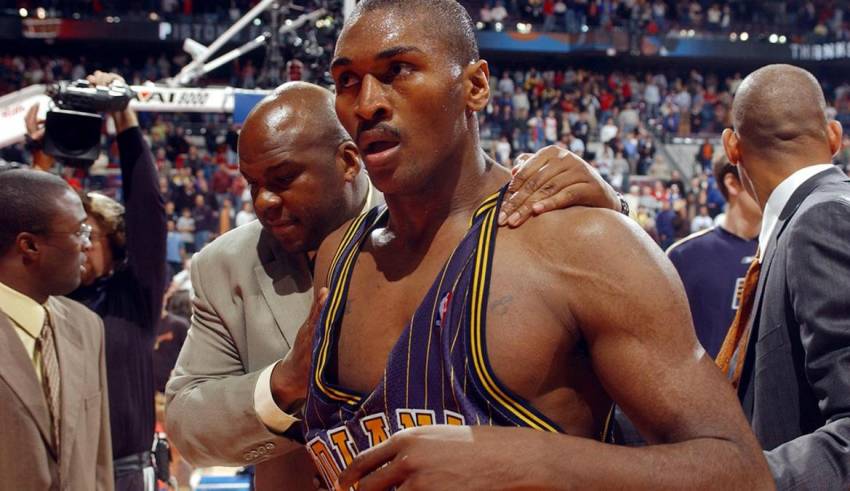 Tuesday, Nov. 19 marks the 15th anniversary of one of the most chaotic scenes in NBA history. The “Malice at the Palace” took place on Nov. 19, 2004 during a game between the Indiana Pacers and Detroit Pistons. Multiple players went into the stands to fight with fans amid the chaos.

It started after Ben Wallace was fouled by Ron Artest in the final minute despite the game being well in hand. Players got into a physical altercation before it was ultimately broken up. However, Artest had a drink thrown at him by a fan when he was laying on the scorer’s table and the mayhem ensued from there.

Several suspensions were handed out by the NBA in the aftermath of the fight. Artest was suspended for the remainder of the season while Stephen Jackson (30 games), Jermaine O’Neal (15), Wallace (6), Anthony Johnson (5), Reggie Miller (1), Derrick Coleman (1), Chauncey Billups (1) and Elden Campbell (1) also received suspensions for their roles in the brawl.

Here’s a look at 10 facts that you may not have known about the famed fight.

Artest later apologized to the fan he fought with

John Green, who was the fan that threw the drink at Artest, actually was able to make amends with the former Pacer during a radio interview on WRIF in Detroit in 2009. Artest apologized to Green for the altercation and the pair agreed to do a charity event together. However, that never came to fruition.

Ben Wallace’s brother was involved in the brawl

David Wallace, who is the brother of Ben Wallace, was in the stands and got involved in the melee. He punched Pacers guard Fred Jones during the brawl. The Wallaces denied David’s involvement for weeks until video surfaced that showed David Wallace throwing punches. He eventually received probation and community service for his role in the brawl.

O’Neal was supposed to receive a 25-game suspension

Artest and Jackson received the heaviest suspensions for their roles in the famed brawl. O’Neal was originally supposed to serve a 25-game suspension, which was similar to what Jackson ended up serving. However, the suspension was appealed and got knocked down to just 15 games, which wasn’t a ton in the grand scheme of things. The United States District Court ended up hearing O’Neal’s appeal and eventually reduced the original suspension.

Artest was traded the following season

Artest didn’t last long as a member of the Pacers following the brawl. He played in 16 games the following season before demanding to be traded. He was placed on the injured list and ultimately traded to the Sacramento Kings in exchange for Peja Stojakovic. Artest would go on to play for the Houston Rockets, New York Knicks and Los Angeles Lakers and even won an NBA title with the Lakers in 2010.

There’s so many small storylines that fans don’t know about this brawl. During a radio appearance in 2018, Artest explained that Green, who threw the drink at him from the stands, actually threw it because his friend bet him $50 that he couldn’t hit Artest.

It turns out that Green had decent aim as he connected with Artest, who was laying on the scorer’s table at the time. Artest immediately jumped up and charged.

Pacers play-by-play radio announcer Mark Boyle was set to conduct a postgame interview with Artest. In fact, Artest had a headset on to get ready for the interview even though his microphone was turned off. Boyle stood up once Artest began charging into the stands and the Pacers star actually stepped over him during the mayhem. Boyle fractured five vertebrae as he wasn’t able to hold Artest back.

“Instinctively or reflexively, I did step up and Ronnie trampled right over me. I fractured five vertebrae,” Boyle told Grantland back in 2012. “The thing I laugh about now is my wife says to me, ‘If you could have stopped Ronnie from going into the stands, none of this would have happened.’ I say, ‘Well, Jesus, if I could have stopped Ron from going into the stands, I would be playing in the NFL.’ My partner, Slick Leonard, was smarter than me — he moved out of the line of fire.”

This might be the most wild fact of the night. Tim Donaghy was one of the referees during the game. He even attempted to keep Artest from going into the stands during the melee, but was unsuccessful.

“I tried to grab him, he just broke away very easily and when I looked up there were other players in the stands and punches were being thrown. So at that point, it was more serious than anything we were involved in ever before,” Donaghy told USA Today in 2014.

Donaghy ended up going to prison after he bet on games that he officiated during his time with the NBA. He resigned from the league after being investigated by the FBI just three years later, but not many remember that he officiated this infamous game.

As soon the melee unfolded, it was pretty easy to assume that the penalties would be huge. Stephen Jackson spoke about the famed brawl on “The Rich Eisen Show” back in 2017 and gave a detailed look at everything that happened. The best part of his story revolved around what Artest said once the Pacers made it to the visiting locker room.

“The funniest part is when we get in the locker room,” Jackson said. “We’re sitting there, my legs are scratched from jumping over the bleachers and Ron is sitting there calming down. His first question to me? ‘You think we’re going to get trouble?’ My reply? ‘You’re lucky we have a job.'”

Current NBA commissioner Adam Silver served as the President of NBA Entertainment back in 2004 when the brawl happened. Silver was tasked with gathering a significant amount of the footage that the league analyzed to make the rulings on the fines and suspensions.

“They were very aware they had a big hole to dig out of,” Silver told USA Today. “They committed enormous additional resources to doing that. I think there is no magic formula for undoing the kind of damage that the brawl did.”

Players lost 146 games due to suspension over the “Malice at the Palace,” and the NBA needed to go through every frame with a fine tooth comb to make sure nothing like this ever happened again. Following the ruling, alcohol sales were cut off late in games and Silver was truly a key factor in the changes that made for a stronger product.

1:15 PM ET ESPN News Services NBA players will receive their full checks when the next pay…