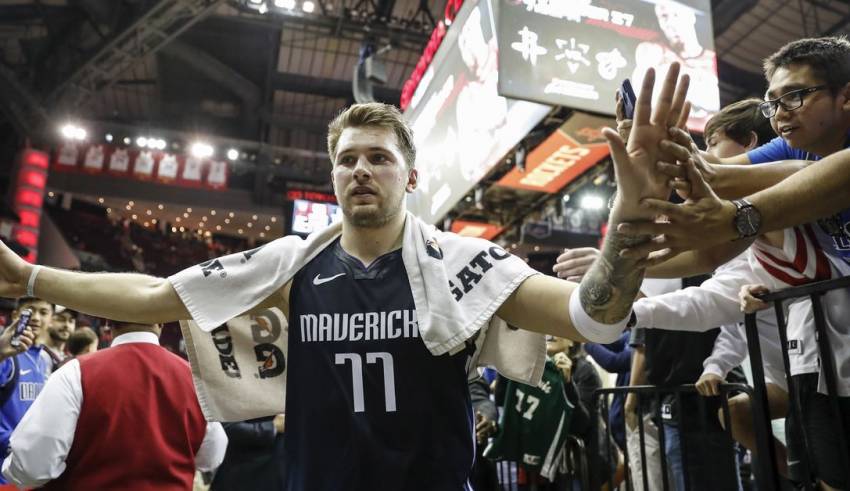 Luka Doncic has been the biggest story in the NBA through the first 20 percent of the season. Part of that is because the 20-year-old is putting up historic individual numbers that have positioned him as an MVP front-runner. The other part is because his Dallas Mavericks just keep winning and are scoring at obscene levels as they do it.

The Mavs won their fifth straight game Sunday evening, beating the Houston Rockets, 137-123. Doncic was as brilliant as ever, finishing with 41 points, 10 assists, six rebounds, and a decisive W over James Harden in the head-to-head matchup. Doncic didn’t do it all himself, though. It’s time to recognize that the team around him looks pretty good, too.

Tim Hardaway Jr. went off for 31 points. Kristaps Porzingis, who has struggled for much of the year, chipped in one of his better games in a Mavs uniform with 23 points and 13 rebounds. Add in Delon Wright, Seth Curry, Jalen Brunson, Maxi Kleber, and Dwight Powell, and it feels like someone different is stepping up to finish off all the open looks Doncic creates every game.

Dallas is No. 1 in offensive efficiency by a mile right now, scoring 117.4 points per 100 possessions via NBA.com. That’s nearly four points better than the second best offense (the Wizards!) and nearly six points better than Houston’s No. 3 offense. Last year’s Warriors set the record for offensive efficiency with 115 points per 100 possessions. Yes, that means Doncic’s Mavs are currently the best offense in NBA history, or at least since 1973 when Basketball-Reference started tracking. (The Basketball-Reference numbers differ slightly from NBA.com but still have the Mavs as the best ever.)

In their last three games, the Mavericks have dropped 142 points, 143 points, and 137 points respectively. This group is a far cry from the on-paper talent of prime Steph Curry, Kevin Durant, Klay Thompson, and Draymond Green, but with Doncic at the controls, the Mavs are scoring even more efficiently, at least through the first fifth of the season. This team looks for real.

All times ET. Games are on League Pass unless otherwise noted.

The NBA is talking with the players’ union and broadcast partners about significant schedule changes that include an early-season tournament, a play-in tournament for the final two postseason seeds in each conference, and the reseeding of matchups in the conference finals of the playoffs, per Woj and Zach Lowe. Ziller writes that this is pro-active and interesting, but there are more than a few issues to sort out first.

Tremendous feature from Saqib Rahim: How a ‘Sikh Heritage Night’ at a Sacramento Kings game sparked a movement against bigotry.

Michael Pina wonders: can Joel Embiid save the Sixers?

I wrote about Zach LaVine’s 13 threes against Charlotte on Saturday (most ever by a non-Splash Brother) on the heels of a developing beef with incompetent head coach Jim Boylen.

I explained Sierra Canyon, the high school basketball team with Bronny James, Zaire Wade, and two top-10 recruits in the senior class. Tuition is only $37K per year!

Oh, hell yeah, a new recurring Seerat Sohi column at Yahoo! Sports. This one is on Doncic and the Atlanta Hawks.

Caitlin Cooper dropped a new podcast on the Pacers.

Mike Rutherford on Notre Dame vs. Toledo being the dumbest college basketball game in many moons.

Be excellent to each other.