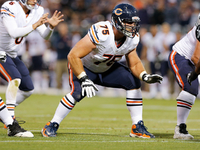 Sixty pounds lighter and fit sharply into his Hall of Famer father’s suit, the recently retired Kyle Long had an easy grin on Tuesday afternoon.

However, when looking back upon his reason to retire at 31 years young, the three-time Pro Bowl offensive lineman said it was all quite plain and simple: His body was no longer at a point where he could do his job at the level he’d become accustomed.

“I had an incredible journey and experience in the NFL,” Long said Tuesday on NFL Total Access. “It was like nothing I’ve ever done before. Met great people, done amazing things, but at the end of the day I wasn’t able to hold up my end of the bargain as a football player. When you sign a contract and they say we’re gonna give you X-amount of dollars, you gotta do your job and I wasn’t able to be healthy enough and to perform my job well enough to protect Trubisky and get the running backs through the holes.”

One season was left on Long’s Bears‘ contract when he called it career, leaving behind the most recent memory of a string of injuries. During the 2019 season, the 2013 first-round draft pick missed 12 games with a hip injury. It was Long’s fourth straight season of missing at least six games and over his final two seasons, he’d played only 12 contests.

As for now, Long said he’d dropped a considerable amount of weight to the point he had to “steal” one of his dad Howie’s suits for Tuesday’s appearance. His body also feels better than it has in a while.

“Man, I feel great,” he said. “I’m able to play golf, I’m not a surgical table getting anything fixed. So, I’m blessed. Football’s afforded me many opportunities.”

Though he’s retired, Long was still carrying out a lineman’s No. 1 job — protecting his quarterback; in this case the oft-scrutinized Mitchell Trubisky.

“Coming into [Trubisky’s] second year, there was a change in scheme,” Long said. “Now you’re looking at a different offensive coordinator in his second year as a starter. You know, with [offensive coordinator Mark] Helfrich and the run game [struggling] and injuries up front, it made it really difficult for Mitch to be able to settle in and have that comfort level to be able to fire that ball where he wants to when he wants to.”

After seven seasons in the NFL — the first three as a Pro Bowl standout and the last four limping through injuries — Long seems to be settling into retirement and to be just where he wants to be.