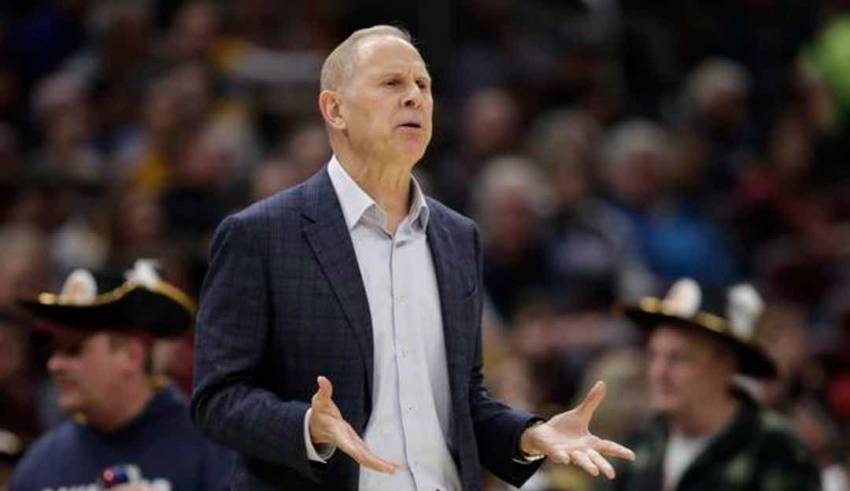 Cleveland — Looking out of the window in any Midwestern city, the months of December and February can be eerily similar.

Generally, both would be dark and gray, with little sunshine in between.

When coach John Beilein made the jump from Michigan to the Cleveland Cavaliers, it was more than a change of scenery. It was also a move from a highly successful program that he guided to the national championship game twice in his 12-year tenure, to a Cavaliers team that was among the worst in the league.

That’s the way the NBA works: Coaching opportunities don’t come along often — and when they do, it’s generally not for a winning team. Following LeBron James’ departure, the Cavs fell on hard times, opening the door for Beilein to achieve his dream of coaching at the highest level.

The Cavs went 19-63 last season and although Beilein had them off to a surprising 4-5 start this year, they’ve lost nine of their last 10. The 14 losses are just one fewer than Beilein’s final two seasons combined at Michigan.

In his 40-year coaching career, beginning at Erie Community College, Beilein had just seven seasons with more than 14 losses. With an 82-game schedule, the NBA brings a new outlook — and a heaping helping of coaching humility.

“I think I have a really good perspective. I’ve said that to myself but it’s not like this is the end of the world here. I really knew what I was getting into and it’s just like when we came to Michigan, went to West Virginia, went to Canisius, to Richmond — all those places,” Beilein said. “It was, ‘Coach, you’re in for a long first year and I look back at those times and say that’s probably where I learned more about coaching and those were some of the most rewarding years we had, with the small victories.’”

Small victories mean going back to fundamentals, which is one of the foundations at each of Beilein’s coaching stops. Even in the NBA, where players tend to rely more on God-given talent than old-school coaching, there’s still a need to instill Beilein’s basics.

“It’s different. He tries to hold everybody accountable,” second-year point guard Collin Sexton said. “He looks at the stats, he has a routine and he wants us to follow that; he wants everything to be specific in a way that’s going to help the team.

“It’s a lot of fundamental stuff and he wants to make sure we’re (doing basic stuff like) stepping and pivoting. It’s going to help us in the long run, so we’ll get through it and make sure we have a good attitude about it.”

The condensed schedule and faster pace of the NBA season can be grueling and unforgiving. Where Beilein might have had time at Michigan to marinate after a deflating defeat and a few days to get ready for the next game, the back-to-backs and long road trips in the pros don’t leave much time to linger on the losses.

That’s one of the bigger adjustments for Beilein, 66, who’s known for his extensive game-film review and game preparation. In the NBA, there’s a premium on developing a short-term memory, being able to move on quickly from one game to the next.

“This is game No. 20 — that would probably be around Feb. 1 (in college). We’re trying to rest them and also teach at the same time. The practice time has been so minimal since we started playing games and then it’s adjusting, but when do we adjust?” Beilein said. “That’s really hard to do when you have a couple 19-year-olds out there and a 20-year-old that you’re playing a lot of minutes.”

There are some similarities between coaching the Cavs and Wolverines. In Cleveland, he’s still surrounded by young players, as the Cavs are rebuilding around Sexton and rookie Darius Garland.

Beilein is regarded as one of the best teachers of basketball in the coaching ranks — and getting the Cavaliers back on a winning track will be one of the biggest challenges of his coaching career.

His focus on the task at hand is one of his strengths and after he surprisingly left Michigan to pursue the goal of coaching in the NBA, he keeps his attention locked on the task at hand, not even breaking his routine to check on his former program.

The Wolverines, ranked No. 4 in the country, faced No. 1 Louisville on Tuesday night, at the same time the Cavaliers were playing the Pistons. Did he set his DVR to watch the Michigan game later?

“I didn’t even know (they were playing Louisville). I know they’re playing, and I figured it’s a big game,” he said. “I love those kids so much and I have to concentrate on what’s really important now and follow them from afar.”

1:15 PM ET ESPN News Services NBA players will receive their full checks when the next pay…