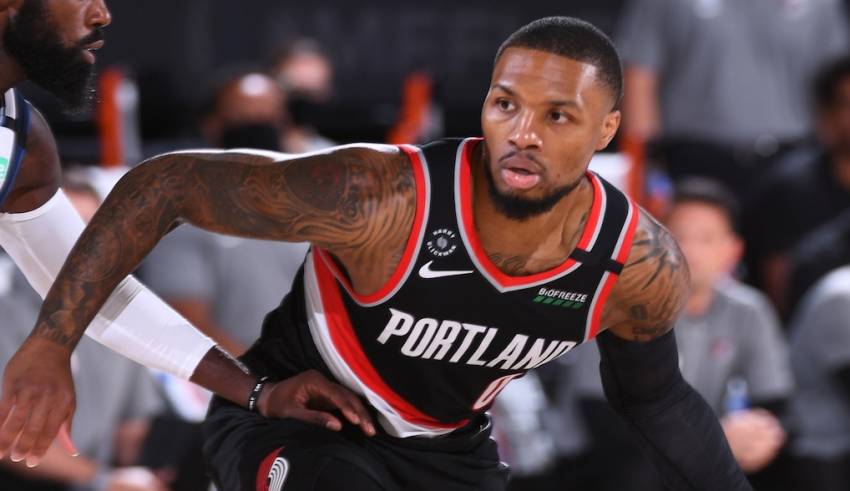 ORLANDO, Fla. — Damian Lillard is in here bursting bubbles belonging to the Grizzlies, Suns, Spurs, Pat Beverley, Paul George, the last two defensive schemes thrown his way and all his critics, both the real and (especially) the imagined.

The world isn’t against Dame, but it doesn’t matter. He’s too fueled up to notice and besides, if this is what it takes to keep the Trail Blazers playing into next week, Portland is better off if he’s all up in his own feelings.

Still smarting from days ago when his two missed free throws cost Portland a win against the Clippers, and the spicy social media fallout that followed, Lillard is on a mini-redemption tour that doesn’t go anywhere but Orlando, site of the NBA reboot. Well, check that: Lillard and the Blazers will head to the NBA playoffs if this and his anger keeps up.

“He’s come out focused and determined,” said Blazers coach Terry Stotts. “No one felt worse about those free throws than he did. Nobody wanted to come into this bubble wanting to go the playoffs more than Dame.”

On Tuesday, Lillard chopped up the Mavericks with a career- and franchise-high-tying 61 points — making all 18 of his free throws, by the way — and this was on the heels of his 51-pointer in a win over the Sixers.

“I told you when I first came here” Lillard said postgame, to TNT sideline reporter Chris Haynes. “I said, ‘I ain’t coming here to waste my time.’ They gave us a chance to get in like we asked for, and that’s what we here to do. Job still ain’t done, but you know what I’m here for. Our work ain’t done yet, but we’re fighting for it.”

Against Dallas, Lillard shot 17-for-32 from the field, including 9-of-17 from 3-point range, adding five rebounds and eight assists.

During a stoppage of play in the closing moments, flush with his own heroics, Lillard looked to the side and yelled: “Put some respect on my name!” The comment, peppered with an F-word, was evidently directed toward TV and the internet since no fans were in the building.

Yet there were a small gathering of reporters, none known as Lillard critics, caught in the crossfire.

“It was just a bunch of people on the opposite side, that press row area,” said Lillard. “Those are the people who have something to say or put out whatever they put out.”

That wasn’t an accidental outburst. Throughout his career, which is destined to finish in Springfield one day, Lillard has wrestled with respect, which he feels has been thrown in his direction with teaspoons. He is prideful and professional, adored by his teammates, revered in Portland for his loyalty and humanitarian work; he will earn well north of $300 million before he’s done playing; all are symbols of “respect” by most definitions.

Lillard is also wrapping up perhaps his finest season, averaging nearly 30 points for an injury-ravaged team and surely garnering some MVP votes. Tuesday’s effort was Lillard’s third 60-point game of the season — placing him alongside Wilt Chamberlain as the only players to achieve that feat, though Wilt had seasons of nine (in 1962-63) and 15 (in ’61-62).

This also marked Lillard’s sixth game of 50-plus this season and the 11th of his career, matching Allen Iverson for eight on the league’s all-time leaderboard. Lillard now holds the four highest-scoring performances in Blazers history.

“I’m happy to be on that type of company,” Lillard said. “I’m also happy that two of the three came in a winning effort. Hopefully it can continue.”

Others to score 60+ at least three times:

But just as Chamberlain once lamented how “nobody loves Goliath” when he played and lost the tug-of-war of respect to Bill Russell, Lillard knows the feeling. Lillard has reached the Western Conference finals just once, and that was last season, when the Blazers were swept by a Warriors team without Kevin Durant. Lillard shot poorly in the fourth quarters of those four games, yet without his dramatic jumper and puppet wave from nearly mid-court that finished off Oklahoma City in the earlier rounds, the Blazers might not have made it that far.

The player who guarded him in vain on that basket was George, then with OKC, who later remarked how it “wasn’t a good shot,” which of course Lillard took as a sign of disrespect.

That’s why Lillard became unhinged when George and Beverley mocked him for those missed free throws against the Clippers. When Lillard later mentioned how he “sent them home” in the past with buzzer-beating playoff shots, that began a chain reaction of social media sparring between Lillard and those Clipper teammates, and later with Lillard and a notably bombastic national media member.

That placed Lillard’s biggest, if only, flaw directly in the spotlight: He’s far too sensitive, especially for a four-time All-NBA team member; one critic to him sounds like one million. Again, it’s understandable. Playing in a small media market on the West Coast for his entire career, without deep runs in the playoffs, Lillard doesn’t feel the warmth of universal acceptance and that’s perhaps unfair to an extent.

And yet, after the last few days, the warmth has been rapidly increasing to scorching levels. With the Blazers logging two losses in the seeded portion of the schedule and unable to afford a third without grave consequences, Lillard has carried the club after those missed free throws. The Dallas game was close, with the Mavericks choosing to give their two stars, Luka Doncic and Kristaps Porzingis, heavy minutes despite having clinched a playoff spot.

Lillard refused to allow the Blazers to wilt, and for much of the fourth quarter kept the ball in his hands. He was mostly good and a bit fortunate: One 3-pointer hit the back rim, soared 15 feet, then dropped through. Lillard also drew an offensive foul in the closing seconds to clinch the win. It was that kind of night — for the second straight game.

The back-to-back eruptions loom as the best individual performance of the NBA reboot, and even better for the Blazers, it elevated them into the eighth and final playoff spot over the Grizzlies by mere percentage points … which will ultimately decide the order because the teams haven’t played an equal number of games. The Blazers haven’t clinched a playoff spot, but do control their destiny with one game remaining, Thursday against the Nets (9 ET; TNT, TNT OT), with the Grizzlies, Suns and Spurs hot in pursuit. Only two will qualify for Saturday’s Western Conference Play-In.

“That’s the most important game of our lives,” Lillard said. “We control our own destiny and we know what we gotta do.”

Shaun Powell has covered the NBA for more than 25 years. You can e-mail him here, find his archive here  and follow him on  Twitter .