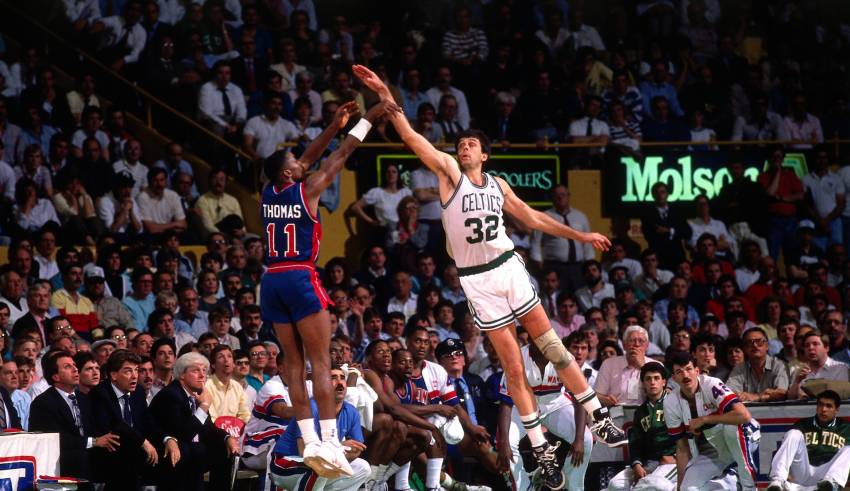 Serious planning for the resumption of the 2019-20 NBA season has begun, but we’re still several weeks away from live basketball. While we wait, NBA TV continues its rewind of some of the best performances and most exciting games in league history.

This week’s schedule features new Pop Up Editions of title-clinching Finals games while “This Day in History”-themed games continue every weekday at 6 p.m. ET.

Shawn Kemp finished with 33 points, six rebounds, four assists and three blocks. Dan Majerle set a postseason record with eight 3-pointers on 10 attempts, draining the dagger with 21 seconds left. But Charles Barkley was the star in this pivotal Game 5, recording one of his four career postseason triple-doubles, playing 47 minutes, shooting 16-for-22 from the field, and making all 11 of his free throws.

LeBron James recorded a triple-double (26 points, 11 rebounds and 13 assists) on the night he won his first championship. This Pop Up Edition gives you all the facts behind the Heat’s 2012 title.

With a little more than seven minutes to go, Dwyane Wade drained a corner 3 in front of the Mavs’ bench to put the Heat, holding a 1-0 series lead, up 15. Dallas responded with a 20-2 run, capped by Dirk Nowitzki’s go-ahead 3 with 26.7 seconds left. After Mario Chalmers tied the game on the ensuing inbounds play, the Mavs took timeout and Nowitzki took Chris Bosh off the dribble for the game-winner (arguably the biggest basket of his career) with 3.6 on the clock.

After Ray Allen saved them in Game 6 with one of the biggest shots in NBA history, the Heat still had some work to do. James scored 37 points and Game 7 still went down to the wire, with the Spurs having two chances to tie or take the lead in the final two minutes in this Pop Up Edition of that classic game.

In this “Film Room” edition, Hall of Famers Isiah Thomas and Kevin McHale watch Game 6 of the 1988 Eastern Conference finals and discuss the Pistons reaching The Finals for the first time in 32 years after being eliminated by Boston in two of the previous three seasons. McHale led all scorers with 33 points.

The 12th Finals meeting of the two greatest franchises in NBA history went down to the final minute of an ugly Game 7, with Metta World Peace making the biggest shot of his life. This Pop Up Edition will take you back to Kobe Bryant’s fifth and final championship.

Thursday: A Day of Game 1s

Thursday’s schedule features some of the best Game 1s of The Finals from the last 20 years, including Allen Iverson’s 48-point performance against the Lakers in 2001 (10 a.m. ET).

The first Finals game between the Cavs and Warriors went to overtime, where Kyrie Irving suffered a left knee injury. LeBron James scored 44 points, but the Warriors outlasted the Cavs to take a 1-0 series lead.

This is a Pop Up Edition of a true Finals classic. With 9.2 seconds on the clock, Scottie Pippen dropped one of the best lines in NBA history, telling Karl Malone that “the mailman doesn’t deliver on Sunday.” Malone missed the free throws that would have given the Jazz the lead and Michael Jordan drained the game-winning jumper over Bryon Russell as time expired.

Friday: Pacers-Knicks and a Finals upset

Four days after the Knicks choked away Game 5 of the Eastern Conference finals, they were back at Madison Square Garden for Game 7, having saved their season in Indiana. The Knicks trailed by 12 late in the third quarter and by one with less than a minute to go in the fourth. But Patrick Ewing tipped in a John Starks miss, Reggie Miller’s shot for the win was off the mark, and the Knicks advanced to The Finals for the first time in 21 years.

The Lakers’ four-Hall-of-Famer starting lineup came up short in its one season together, and the Pistons proved that you can win a championship without a superstar. The Detroit defense held the Lakers to just 92 points per 100 possessions in The Finals, and they put Game 5 away with a 27-14 third quarter. This Pop Up Edition gives you all you need to know about the Pistons’ their third NBA title.

John Schuhmann is a senior stats analyst for NBA.com. You can e-mail him here, find his archive here and follow him on Twitter.