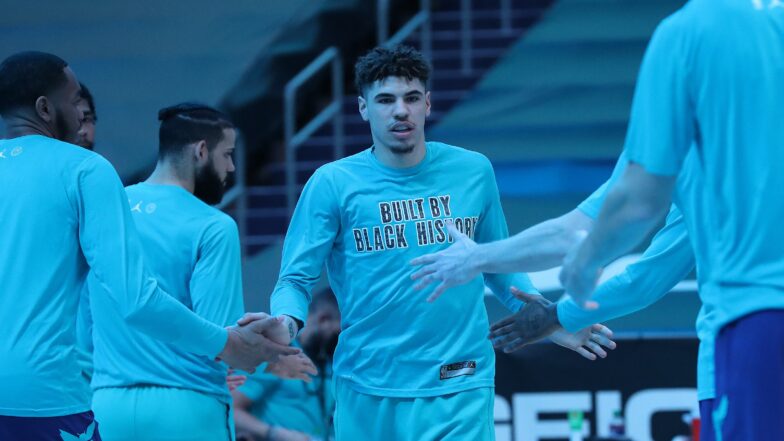 A hiccup with coronavirus testing left LaMelo Ball waiting at home, delaying his arrival at the Spectrum Center for his usual pregame routine.

“Really didn’t get my shootaround that I usually do,” Ball said.

But you couldn’t tell from watching Monday as Ball tied a rookie franchise record with seven 3-pointers in the Charlotte Hornets’ 119-94 rout of the Houston Rockets. Ball tied the team mark set by DJ Augustin in 2008 and matched by P.J. Washington last season.

At 19, Ball joined elite company with LeBron James and Luka Doncic to become just the third player that age or younger to register multiple games of 20 points, 10 assists and five rebounds, according to Elias Sports Bureau, with his 24-point night against the Rockets including 10 dimes and seven rebounds. Ball also became the first rookie since Stephen Curry in 2010 against the LA Clippers to post a stat line in a single game of at least 24 points, 10 assists, seven rebounds and seven 3s.

“I’m not sure where the respect level is for his shot yet,” Hornets coach James Borrego said. “Every team’s a little bit different with him. But he’ll continue to prove that he can shoot it. He shoots it with confidence.”

Ball certainly showed it on the way to helping Charlotte capture its fifth win in seven games.

The Hornets inserted Ball into the starting lineup on Feb. 1 in a win over Miami. Charlotte now owns a record of 3-2 with Ball in the starting lineup, and the Hornets are averaging 120.8 points over their last six outings after averaging 107.7 points in the first 19. The 25-point victory over Houston marked back-to-back 20-point wins for the Hornets, a feat they hadn’t accomplished since 2017.

Charlotte held Houston to just seven points in the fourth quarter as the Rockets shot 2 of 19.

“This is a fun group. I love coaching them. They inspire me,” Borrego said. “I love the joy they play with, the unselfishness, the spirit that they have. Even when things aren’t going well, they have a calm spirit about themselves, a positive spirit. I’m just proud of them. They’re a joy to be around.”

Ball contributed heavily to Borrego’s warm, fuzzy feelings in the first half by hitting 4 of 6 from deep in addition to dishing five assists as the rookie and Gordon Hayward contributed 15 points apiece.

Ball and Hayward represented just two of six double-figures scorers for Charlotte, which produced that many scorers in double figures for a league-best 12th time this season.

With Ball pushing the pace and testing his range from deep, Charlotte finished with a 25-13 advantage in fastbreak points to go with 19 3-pointers. The Hornets are 5-1 this season when they knock down 16 3s or more.

Ball’s performance in that department against the Rockets certainly eased one of the major concerns Borrego and the Hornets coaching staff harbored when they first evaluated the rookie in the predraft process.

“There was concern on my part,” Borrego said. “But when we went to L.A. to interview him and watch him, there was just a confidence about him in his shot. I think as I sat there with [general manager] Mitch [Kupchak], I looked over at him and said, ‘He’s gonna be fine.’ The kid oozes confidence. He believes it’s going in. That’s at least half the battle in this thing. He’s gonna continue that. He’s fearless.”

Is LaMelo Ball the leading candidate for Kia Rookie of the Year?

Ball admitted that when he first arrived at Hornets training camp “they low-key tried to adjust” his shot, but that’s one of what he called “a ton of stories” about teams on virtually every level trying to coax the rookie into altering his stroke.

It’s paying off tremendously for Charlotte, as Ball is firing the long ball from way beyond the arc on many occasions. Ball is 19 of 37 from deep over the last five games as a starter, and Borrego believes the rookie’s confidence to shoot the 3-ball from deeper range opens up Charlotte’s offense.

“It’s difficult on a defense. If he’s gonna make those shots, it’s gonna be difficult to stay in front of him,” Borrego said. “It opens up the court for everybody. You see that when ballhandlers, point guards can step out and shoot it with range. I guess the range he shot it with is really surprising. The way he shoots it with ease from range, it’s almost the same effortless shot whether he’s at the line or two feet behind the line.”

“They had me waiting at my house because the COVID[-19] testing, something went wrong or something,” Ball said. “Came late, and I guess I was just hitting, for real. I really didn’t get my same routine, none of it.”