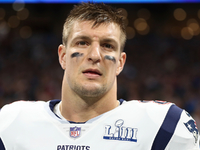 Rob Gronkowski is making his debut Thursday night as a FOX Sports football analyst, but the first mention of him in the lead-up to the matchup between the New York Giants and New England Patriots came from Pats owner Robert Kraft.

Kraft went on NFL Network’s “NFL Gameday Kickoff” ahead of Thursday night’s clash and left the door open for the retired tight end to return to the organization at some point.

“We all love Gronk and I think the bottom line is he hasn’t put his retirement papers in,” Kraft said. “So we can always pray and hope. … That’s a good academic argument that there is hope for us still with Gronk.”

Gronk announced his intention to retire from football in March following a nine-season career with the Patriots. Since then, he has lost around 20 pounds, partnered with a CBD company and made multiple media appearances discussing the likelihood and unlikelihood of him returning to football.

In one interview, the Patriots tight end told NFL Network Insider Ian Rapoport in September that he’ll know if he’s ready to return if the passion to play bubbles up again.

“Just like I knew I needed to walk away from the game. I just felt it. Just felt like it was time,” Gronkowski explained to Rapoport. “You just have that feeling inside. Just going with the heart, just going with the gut feeling, and that’s how I’m going to be living my life too, with what my gut feeling is telling me. Throughout my life I’ve had gut feelings and then I didn’t go with them. I went with a different option, and then it never works out. I swear it never does.

“You know, I’ve answered this question many times before. I would have to be feeling it, feeling it big time to come back. It’s always going to be open in my mind,” Gronkowski said. “I love the game of football. I love playing the game. I love being around the game. I even love watching the game of football now. It makes just the appreciation to watch it, just seeing the hits, seeing the glory of it, you understand the game so much more and why fans are (fans) of the game so much more.

Gronk has not indicated he intends to return anytime soon, but Kraft’s comments will only spur more speculation that a comeback is likely and inevitable.