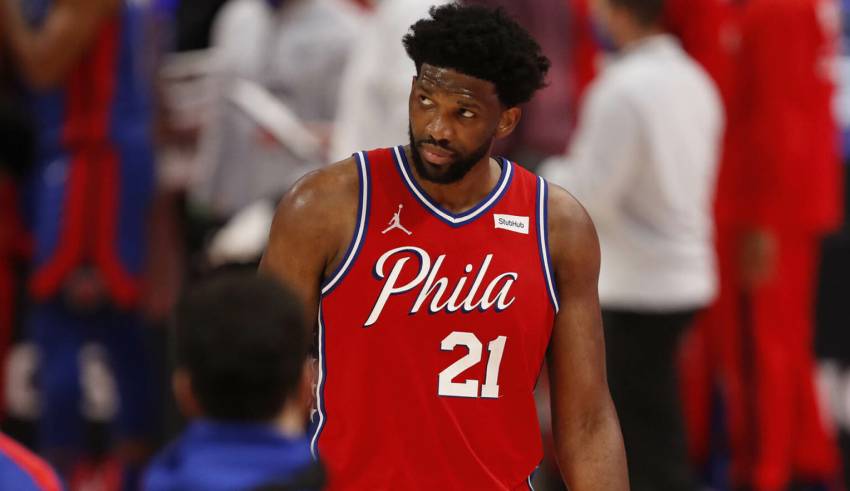 Joel Embiid has dominated in February, averaging 31.5 ppg in 11 games.

We all saw the reshuffling coming for this week’s Kia Race to the MVP Ladder, but there’s still no clear-cut frontrunner as Joel Embiid seizes the top spot.

Matched against fellow MVP candidate Luka Doncic, Embiid led the 76ers to their fourth win in five outings on Thursday, as they forced the Mavericks into a season-high 22 turnovers, including 13 in the first half. Still, you can’t overlook Embiid’s field goal percentage (26%) over the last three games, or the fact he’s making his living largely at the free-throw line lately, despite coming into Thursday’s game averaging 29.8 points.

Are the Sixers the clear-cut top team in the East this season?

“It’s funny, you know he’s big, but you don’t realize how big he is, and his post game is so much more efficient than I remember it,” 76ers coach Doc Rivers said.

Meanwhile, LeBron James continues to struggle to keep Los Angeles afloat in the wake of an injury to Anthony Davis and the absence of Dennis Schroder due to the league’s health and safety protocols for contract tracing.

James is averaging 37.3 minutes over the 12 games he’s played in the month of February, but the 36-year-old isn’t asking anyone for a reprieve.

“I’m going out and playing the game,” James said Monday after playing more than 43 minutes in Los Angeles’ 127-124 overtime loss to the Washington Wizards. “I’m doing my job, and I’m trying to do it at a high level. I have never asked for time off or time throughout the season, and it’s growing to a point where it’s not even coming from me anymore.

“It’s just like, ‘O.K., LeBron should take time off,’ or ‘Why is his workload at this?’ I’ve been hearing it for five, six, seven years now, and I’m still going strong. So, I don’t need a handout. I’m not looking for a handout. My job is to go out when I’m available, when I’m healthy to go out and play, and that’s what it’s all about.”

The Wizards took down the Lakers in an overtime classic.

While none of the top three in the race have separated themselves from the pack, Embiid moves to No. 1, while James falls back to No. 2, followed by Nikola Jokic, who jumped from No. 5 in last week’s edition back to No. 3. Portland’s recent three-game losing streak pushes Damian Lillard down a spot to fifth, while Stephen Curry maintains his No. 4 spot.

On the heels of his first All-Star nod, Chicago Bulls guard Zach LaVine makes his debut this week.

Embiid and the 76ers dominated the Mavericks in the paint Thursday, outscoring them 50-26. Embiid shot 10 or more free throws for the ninth consecutive game, which ranks as the second longest streak in the NBA over the last 10 seasons behind James Harden’s 21 straight games in 2019. As the 76ers prepare for Saturday’s matchup against Cleveland (7 ET, NBA League Pass), Embiid has averaged 22 points over the last three games, and he’s hitting just 26.4% overall while cashing in at the free-throw line (34 of 38).

LeBron James scored 31 points in the Lakers’ loss to the Wizards this week.

The Lakers have four straight losses with a slate of tough opponents upcoming in Portland, Golden State and Phoenix. Despite racking up 31 points, James committed a season-high eight turnovers Monday in a loss to Washington before finishing a season-worst minus-20 Wednesday during a 114-89 drubbing at the hands of Utah. Davis’ timetable for return is uncertain, but the expectation is he’ll come back after the break. Schroder could be in the lineup tonight when the Lakers host Portland (10 ET, ESPN), and his return should alleviate some of the burden for James to create offensively.

Jokic getting it done in Denver

Inside The NBA’s experts have nothing but praise for Nikola Jokic’s season.

The Nuggets have dropped four of their last six games, but Jokic is averaging 27.3 ppg on 53.9% shooting in 12 February games, hitting 47.1% on 3-pointers and 96.4% from the line. Jamal Murray remains a solid co-star to Jokic, but the Nuggets need more from Michael Porter Jr. if the individual exploits of the stars are going to consistently lead to victories. Jokic, Murray and Porter combined to score 76 points on 52% from the field in Thursday’s loss to Washington, while the rest of the team combined for 34 points on 29% from the floor.

Curry credited for evolution of 3-pointer

LeBron James, Kemba Walker and other players pay tribute to Stephen Curry for taking the 3-point shot to another level.

Curry put together a career-best streak of scoring 25 points or more in 13 consecutive games, before shooting a season-worst 1 of 11 from deep Wednesday to finish with 24 in Golden State’s win against the Indiana Pacers. The returns of James Wiseman (sprained wrist) and Kevon Looney (sprained ankle) should only help Curry, who has been carrying the load for Golden State. The Warriors are excelling against sub-.500 teams (11-6), while struggling against teams better than .500 (7-9). But Curry is doing his part, averaging 33.8 ppg in February and  shooting 50.2% overall while surrendering 2.6 turnovers per game.

Portland’s star guard was on his game in the Blazers’ loss to the Nuggets.

A two-day break could do Lillard some good going into tonight’s matchup against the Lakers (10 ET, ESPN). Portland is coming off a three-game skid on the heels of a season-high six-game winning streak. The Blazers are 3-9 when Lillard is held to fewer than 30 points, and they’re 14-4 when he puts up 30 or more. Like the Warriors, Portland seems to handle business against the teams it should beat, given its record of 13-6 against teams below .500. When the Trail Blazers clash against foes with records above .500, that record slips to 5-7.

Got thoughts on the Kia MVP chase? Hit me up via e-mail or send me a tweet!