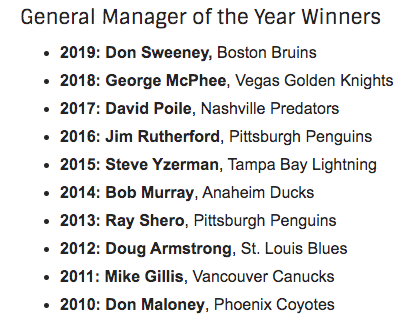 This in from Kevin Paul Dupont, the long-time hockey writer of the Boston Globe, some praise for Edmonton Oilers GM Ken Holland: “We’re a long way from the vote tallying, but Ken Holland is the early leader for NHL executive of the year on the strength of his July 19 deal that brought James Neal to Edmonton — a swap for Milan Lucic that looks like it may have triggered a turnaround for the moribund Oilers franchise…. Neal’s production is not an anomaly. The anomaly was last season (7-12—19 in 63 games). He has reached the 25-goal plateau five times, and prior to last year’s blip his annual yield on an 82-game season was right around 30. Not many of those guys around, and few other than Phil Kessel ever get traded…. Neal and McDavid are longtime pals, and both work out each summer with Gary Roberts. It looks like a great fit even if they aren’t riding together on the first line. Tippett has been rolling Neal out on the first power-play unit, parking him at the top of the crease, and it’s a good bet he’ll keep seeing cupcakes delivered his way from the silken-handed McDavid.”

The Oilers are tied for first overall, tied for the league lead in goals, have the NHL’s third best power play and third best penalty kill and their two best players are 1-2 in the scoring race. Enjoy your afternoon.

At the Cult of Hockey

LEAVINS: In praise of Matt Benning