April 21, 2021
Trending
Home NFL Jimmy Garoppolo had one of his most productive NFL starts in 'Thursday Night Football' win over Cardinals – CBS Sports 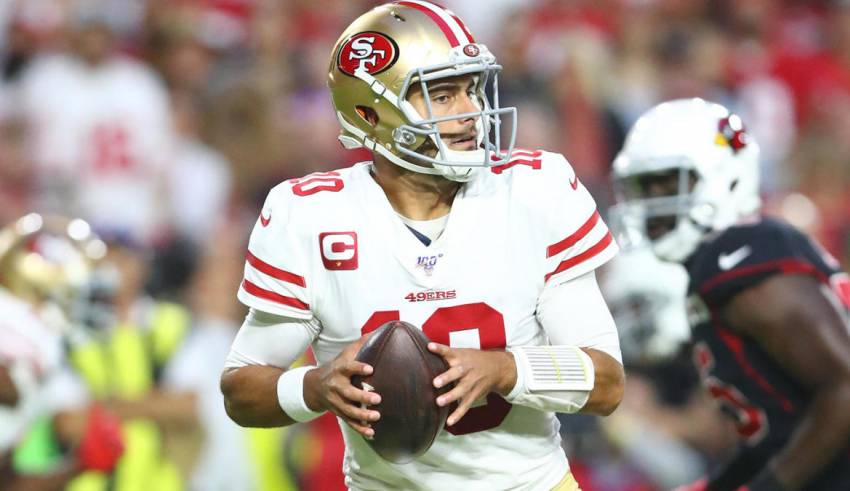 The San Francisco 49ers have been one of the biggest surprises in the NFL during the first half of the season. In fact, the 49ers kept their undefeated record intact with a 28-25 win over the Arizona Cardinals on Thursday night to open Week 9.

During Friday’s episode of “Kanell and Bell,” Danny Kanell and Raja Bell took time to break down the matchup and debated whether this was quarterback Jimmy Garoppolo’s best start since entering the league.

Garoppolo finished the game completing 28-of-37 passes for 317 yards and four touchdowns against the Cardinals. He was aided by the emergence of wideout Emmanuel Sanders, who was acquired in a trade from the Denver Broncos last month.

Despite Matt Breida rushing for 78 yards, San Francisco’s ground game averaged just 3.3 yards-per-carry. In turn, the Cardinals made Garoppolo beat them and he took every advantage of that opportunity.

“If you don’t have to sling it around 55 times and pull rabbits out of hats every night, you can rely on a steady ground game and make timely plays as a quarterback,” Bell said. “I don’t really love that people slight him like that, but I’m not sure if I’m ready to put him in that top tier of quarterback yet.”

Garoppolo hasn’t put up gaudy numbers during his NFL career thus far, but he has put together a 14-3 record since coming over to the 49ers. San Francisco does have a solid rushing attack that features Breida and Tevin Coleman, but that aspect of the offense wasn’t there for the 49ers in Thursday’s nationally-televised showdown.

“I did think that last night was the game where he was asked to be a little bit more of a game manager and he took advantage of that,” Kanell said. “They did make an effort to take away the run game and put more of the game on Garoppolo’s shoulders. I think he responded in a really good way.”

The 49ers improved their record to 8-0, but have a tough test next week when they take on an NFC West foe in the Seattle Seahawks.