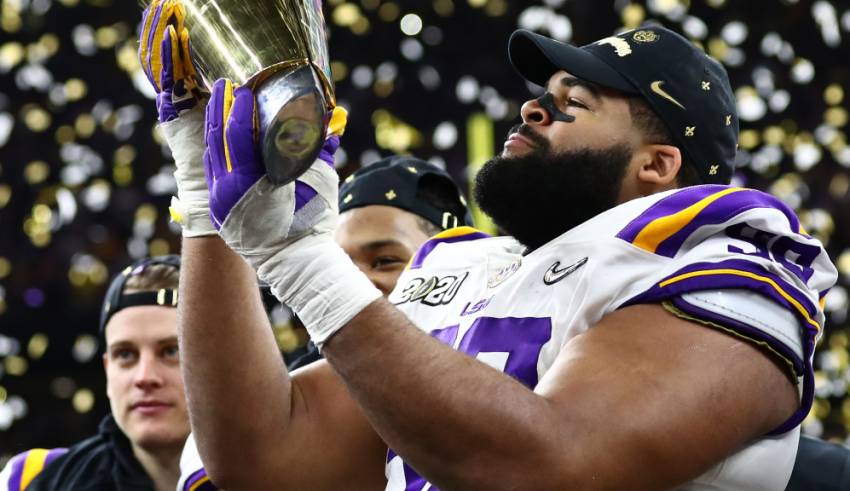 NFL.com’s Chad Reuter released a pre-combine three-round mock this week and the Jacksonville Jaguars came away with an interesting haul. With the team needing help on defense, Reuter had them focusing on that side of the ball while also drafting one big receiving threat on offense.

In round one, the Jags were slotted a familiar name in Clemson linebacker Isaiah Simmons and they turned their attention to the offensive side with pick No. 20 to land Notre Dame tight end Cole Kmet.

The Jaguars really missed Telvin Smith in 2019. Simmons is a similar player who could fill multiple linebacker spots.

Adding the pro-sized, athletic Kmet should aid Nick Foles, Gardner Minshew or whoever is Plan C at quarterback for the Jaguars.

Simmons is a prospect we’ve mentioned on several occasions, and simply put, he’d add a solid player to the Jags’ linebacking corps, which is arguably the weakest group on the field.

Kmet would provide the Jags’ signal-caller with a 6-foot-5, 250 pound, can’t miss target who was a big-time weapon for the Fighting Irish. He ultimately finished the 2019 season with 43 receptions for 515 yards and six touchdowns, which gave him the second-most receiving production on the team only under receiver Chase Claypool.

Both first-round selections would be fine picks but the question for Simmons would be where to put him if Myles Jack is moved to weak-side linebacker. In Kmet’s case, history would suggest he wouldn’t have an immediate impact as a rookie tight end.

In the second and third rounds, the Jags came away with Auburn cornerback Noah Igbinoghene, who our own Daniel Griffis recently did a scouting report on. The receiver turned cornerback is the son of two Olympic track runners (Festus and Faith Igbinoghene) so it’s not shocking that his speed sticks out on tape. While he’s still learning the position, he has good hips which allowed him to stick with some of the Southeastern Conference’s shiftiest receivers.

Lastly, the Jags bolstered their defensive line with the selection of Louisiana State’s Rashard Lawrence. With both Marcell Dareus and Abry Jones being viewed as potential cap casualties, the Jags could be looking for one or two defensive tackles and Lawrence would be a great addition. He’s proven to be pretty stout in the middle for the Tigers defense and offers the Jags a player with strong hands and a good motor. Even if the Jags could retain Dareus or Jones,  acquiring Lawrence to learn from either would be smart as the team needs to get younger and cheaper in the middle.