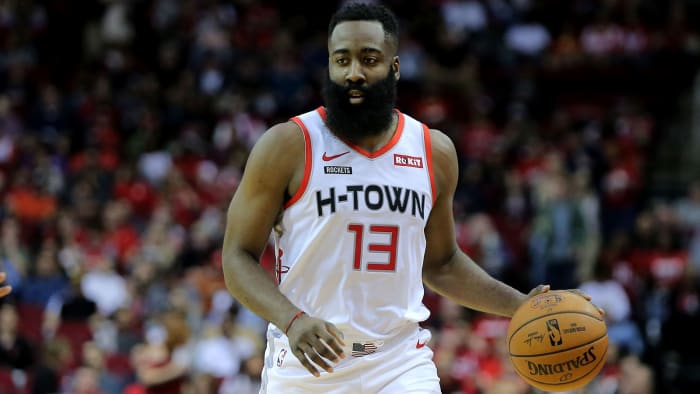 On Saturday, James Harden recorded the most efficient 60-point game in NBA history in a win over the Hawks. He followed that performance with a 50-point performance against the Spurs. The Houston Rockets superstar is now averaging 39.4 points per game and has a great chance to average over 40 points per game this season. We haven’t seen an offensive talent that could score this way in a long time, so that brings us to the question: Is Harden the best scorer in NBA history? The Crossover staff weighs in.

I’ve fought this, ever since Daryl Morey first declared it “factual” that Harden was a better scorer than Michael Jordan. And without going too far down the analytics rabbit hole, there are plenty of numbers that reinforce it. The counter—which Morey also acknowledges—is that stick Jordan into today’s game with today’s rules (and remember—defenses were allowed to manhandle Jordan in ways Harden couldn’t contemplate today) and he would duplicate Harden’s output, if not better. I’ve hung my hat on that—until now. Yes, I believe Jordan would thrive in today’s game, but there’s no way to prove it. What is provable is Harden is an absolutely, positively bonkers scorer, with better body control than any player in recent memory (he’s averaging an absurd 14.4 free throws per game, a career-high) and an ability to manipulate defenses even when the entire defense is keyed on him. There are things Harden has to prove: Can he consistently score in the clutch, like Jordan or Kobe Bryant? But as regular season scorers go, you are hard pressed to find someone better. So my answer? A hard … maybe.

James Harden is not the best scorer or best offensive player in NBA history, but he is the best accumulator of points the NBA has ever seen. This question is all about semantics. Harden has never been an outstanding shooter or highly efficient player, but he makes up for those very, very slight flaws with volume, and basically understanding how to best leverage any situation for the maximum number of individual points. Kevin Durant, for example, has a higher career effective field goal percentage and true shooting percentage (albeit very slightly) than Harden. Durant may not be able to play exactly like Harden, but if he were given a similar role as Harden the last few seasons—constant isos, pick-and-roll after pick-and-roll—he could probably put up similar numbers, right?

What separates Harden is he’s the only one who plays the way he plays. That itself is a rare talent. It’s not easy to carry the burden Harden does night in and night out, and there’s a reason why more players don’t play his way. And yet… Harden’s insistence on sucking any variety out of his game, and his cold, ruthless pursuit for threes, free throws, and layups plays—in my opinion—a bigger role in his absurd scoring outputs as opposed to his pure scoring talent. Whether it’s Durant, or Michael Jordan, or maybe even Stephen Curry, I think more players are actually capable of scoring at a similar clip to Harden, they just haven’t necessarily shown they have the stomach to ape his style.

If more scorers, like Durant, Curry, LeBron or maybe even Luka Doncic, committed to playing like Harden for a season or two, I think this would be a much easier conversation to have. Those guys may not be able to do a perfect Beard imitation, but I think they could come close, and I believe a couple of them could put up similarly astronomical scoring numbers. For now, I’m only ready to go as far as to say, because of his dogged commitment to his own style, Harden is the best accumulator of points in NBA history. As a pure scorer, he definitely has some competition.

Best of all time is very steep and I’m not ready to go there, but Harden is playing his way into the conversation with sustained excellence. I think the point totals have to be accounted for with some inflation in mind because of the way the Houston has perfected playing through him. and with how today’s up-tempo, high-possession games naturally generate more points. I’ll sound like a cranky old man for saying it, but if, say, Michael Jordan was asked to play the exact same way in this era, he probably could match or come close to what Harden is doing. Could Harden potentially put together the best offensive season in history? Sure. But I’m not going to shake my fist about his place in history yet. His career has him trending toward the pantheon of truly elite scorers, but there’s no need to be hasty. You can watch TV for that take.

The easy answer is no. Wilt Chamberlain scored 100 points in a game and recorded six seasons over 35 points per game. The man averaged 50.4 ppg in 1961-62. Nobody will ever come close to that average.

Let’s dive into the more interesting, non-Wilt category. Does Harden have a case? Michael Jordan and Kobe Bryant have a clear lead in volume, but The Beard’s recent tear is closing the gap. Only three non-Wilt players have more 50-point games. Chamberlain and Bryant are the lone players with more 60-point efforts. Harden is on pace for his third straight scoring title, and he’s currently having the best non-Wilt scoring season ever at 38.9 points per game.

Houston’s guard is still a step behind the aforementioned trio (Chamberlain, Jordan, Bryant) historically. He will only enter the top 50 in career points this season. But continuing his current tear for another four to five seasons could vault Harden ahead of any scorer in NBA history.