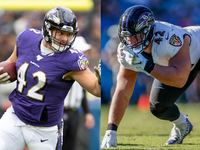 As Lamar Jackson dazzles as a dual threat at quarterback for the Ravens, running and throwing his way into the MVP forefront, there’s another Baltimore player excelling in more ways than one.

In a throwback to past autumns on the gridiron, Patrick Ricard plays both ways for Baltimore as a defensive lineman and fullback.

Over the course of the season so far, Ricard has played snaps on offense, defense and special teams in each of the Ravens‘ 10 games during their 8-2 run to first place in the AFC North.

“It almost feels like I have divorced parents,” Ricard joked, via the team website’s Ryan Mink. “My offensive coaches and defensive coaches fight over me.”

The NFL’s lone ironman’s days of splitting time on both sides of the ball might well be numbered, however.

In each of his three seasons, Ricard has played on both sides of the ball for the Ravens. This season, though, his role on offense has increased and he’s had more snaps on that side than defense in each of the last five games.

It makes sense as he’s currently the leading vote-getter among AFC fullbacks for the Pro Bowl.

“I think we’re at the point now where there’s really no limit to how much we’re going to use him,” Ravens offensive coordinator Greg Roman said. “I think he’s excelled enough at the fullback position. I mean, is there a better fullback in the league? I don’t know.”

Baltimore boasts the No. 1 rushing attack in all of the league, with Ricard often paving the way for Jackson and running back Mark Ingram. Averaging 203.8 yards per contest, Baltimore is the first team to tally 200-plus yards a game since Walter Payton’s 1977 Chicago Bears.

Hence, Ricard’s onus to offense is winning out. He even caught a career-high three passes in a Week 11 win over Houston. Still, Ricard has played on defense in every game, even tallying three starts and accumulating nine tackles, a sack and a forced fumble.

“We work together well. And I’m happy for Pat,” defensive coordinator Wink Martindale said. “He’s a Pro Bowl fullback. And he’s also a good defensive tackle. But we’re happy for Pat. The defensive guys get fired up when he’s knocking somebody into the Gatorade over on the other bench or catching the ball out on the flat and breaking a tackle.”

When the Ravens hit prime time on Monday against the Rams, it will be a star-studded affair on both sidelines. But Ricard is likely to be the only one looking to star on both sides of the ball.