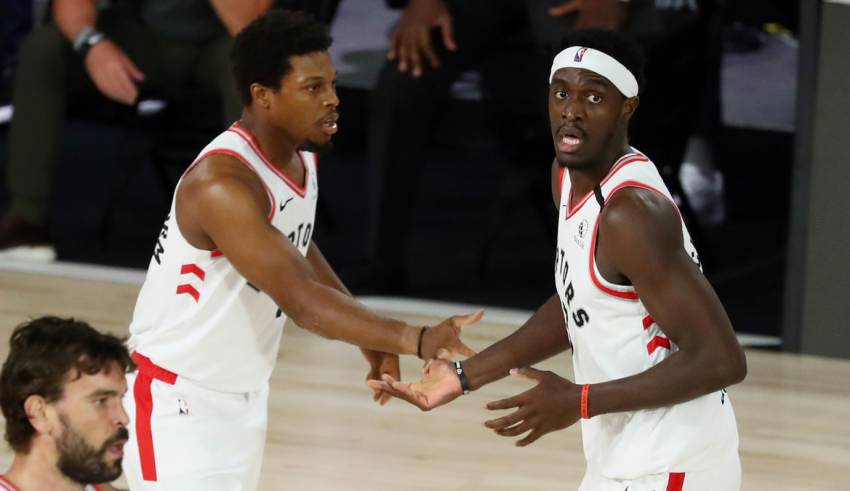 After the 1984–85 NBA season, the Kansas City Kings left the middle-American city and headed for the West Coast. More than 30 years later, the city is once again looking to be the host for an NBA team, even if it’s for only a single season.

On Tuesday, a number of political leaders from the states of Missouri and Kansas wrote a joint letter to NBA commissioner Adam Silver, as well as to the Toronto Raptors ownership group, expressing their interest in hosting the Raptors, should they seek a temporary home in 2020–21. In the letter they write that Kansas City’s sports fans “are unmatched, already proving an avid fanbase for the Chiefs, the Royals, Sporting—and would be eager to extend that support to the Raptors.”

Plenty of questions need to be answered ahead of the NBA’s next season. And chief among them is if the Raptors will be able to play in Toronto and travel freely to the United States, given Canada’s strict restrictions about crossing the border amid the coronavirus pandemic. The Blue Jays played their home games in Buffalo in the most recent MLB season and Toronto FC played its home MLS matches in East Hartford, Conn. A recent spike in positive COVID-19 cases in the United States would seemingly only further complicate the Raptors’ future.

“We’re gonna make sure we’re ready,” Kansas City mayor Quinton Lucas told Sports Illustrated. “Kansas City is an outstanding city, a major league city. And it’s one that I think could be a great host for the NBA, if it’s for a year, or if somebody is ever looking for generations.”

Lucas says the city’s push for the Raptors is just days old. However, it recently got a boost from arguably Kansas City’s most famous resident, Chiefs quarterback Patrick Mahomes.

“Bring them to KC,” Mahomes tweeted on Monday night, referring to the Raptors.

While Lucas says he has yet to speak with Mahomes about the possible NBA move to Kansas City, the city’s mayor said that, “When [Patrick Mahomes] lends his support behind something, as I think probably our biggest star in the National Football League right now, then I think it shows something significant about it.”

In addition to Kansas City, Yahoo Sports’ Vincent Goodwill recently reported that Louisville is another possible site if the Raptors can’t play in Toronto. Buffalo, Newark and Seattle would additionally appear as other possible candidates, to name just a few.

Lucas notes that his city has an NBA-ready arena, in the recently re-branded T-Mobile Center and a business community eager to get involved with professional basketball. He also says he’s “not concerned” about possible travel issues for the Raptors if they play in Kansas City and notes that his city is a TV market larger than cities like Milwaukee, Oklahoma City New Orleans and Memphis.

“I’d love to see how the Raptors would perform on local cable,” Lucas says.

“You would see people buying gear. You would see people celebrating in the most responsible, socially distanced ways we can, like a car parade. And ultimately, I think for Toronto it would be an amazing way to have a market relationship for years to come.”

Lucas is hoping Kansas City’s latest possible NBA chapter ends better than its most recent one. In June of 1983, Gregg Lukenbill, a Sacramento-based real-estate developer, fronted a group that purchased the Kings, a franchise that had the third-worst attendance in 1981-82 and the sixth-worst attendance for the 1982-93 season. Lukenbill said in October 1984 that “our commitment to the people of Kansas City remains the same.” But he did so around the same time that his group announced plans to build a warehouse in Sacramento big enough to house an NBA team, and knowing full well that Kansas City’s Kemper Arena lease ended after the 1984–85 season.

By mid-January 1985 and less than two years after purchasing the Kansas City franchise, Lukenbill told The Sacramento Union he was confident “we’ll have a professional basketball team [in Sacramento] by October, November next season.” By the end of January of that year, the Kansas City Kings franchise had filed for relocation. They were heading off to Sacramento, where they remain to this day.

Lucas made clear that he had no intentions of trying to steal the Raptors from Toronto. But hosting the franchise, even temporarily, would instead provide both Kansas City and the NBA with a “test run,” similar to what Oklahoma City had with the Hornets in the aftermath of Hurricane Katrina.

“I hope this actually shows the NBA, at a time when there are a lot of questions about sports and revenue and all of that, that there is a market here in middle America that is hungry for professional basketball,” Lucas says.

“I think that’s part of the reason that we’re going to make a full-court press, if anything to show that Kansas City is available and willing and a good option.”