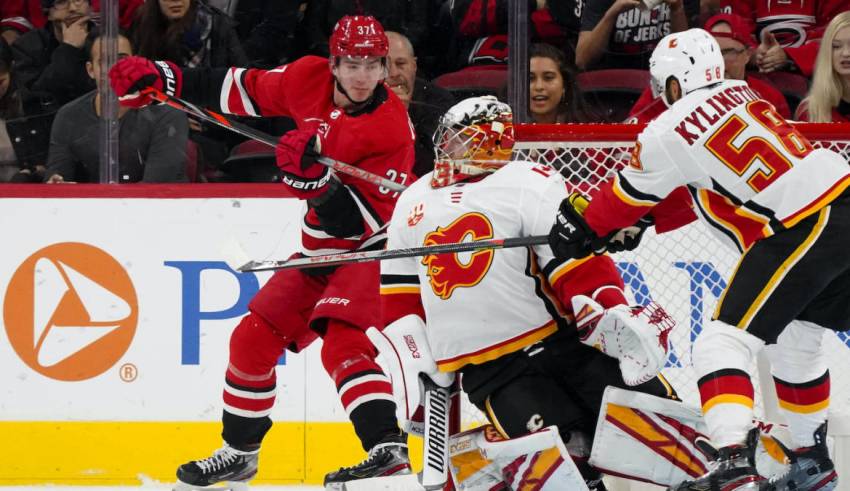 Well, it finally happened — the infamous lacrosse-style goal has made its way to the NHL level.

Carolina Hurricanes forward Andrei Svechnikov successfully executed the flashy trick move during Tuesday’s game against the Calgary Flames, marking one of the first times we’ve seen it pulled off in the NHL ranks. The 19-year-old Svechnikov made it look smooth too, cradling the puck onto the blade of his stick before wrapping it around the net and tucking it over the shoulder of Dave Rittich and into the Calgary net.

It was a thing of beauty.

It’s worth another look.

It’s a move made famous by Michigan’s Mike Legg in 1996 and replicated numerous times over the years in lower level leagues. In fact, Vancouver Canucks prospect Nils Höglander delivered his own during a SHL game earlier in the day on Tuesday. However, we don’t even see the move attempted that much at the NHL level because of how much time and space it usually requires to pull off.

Svechnikov found himself with the necessary time and space and he went for it — a bold decision for a teenage kid still finding his way in the league — and he nailed it, even making sure that his stick was below crossbar level to make it legal.

It was Svechnikov’s first of two goals on Tuesday night as he powered the Canes to a 2-1 win over the Flames. That second goal might have been the game-winner but this is the one we’ll be remembering for a long, long time.