April 23, 2021
Trending
Home NBA How NBA Players and Coaches Are Adapting to Their New Normal in the Bubble – The Ringer 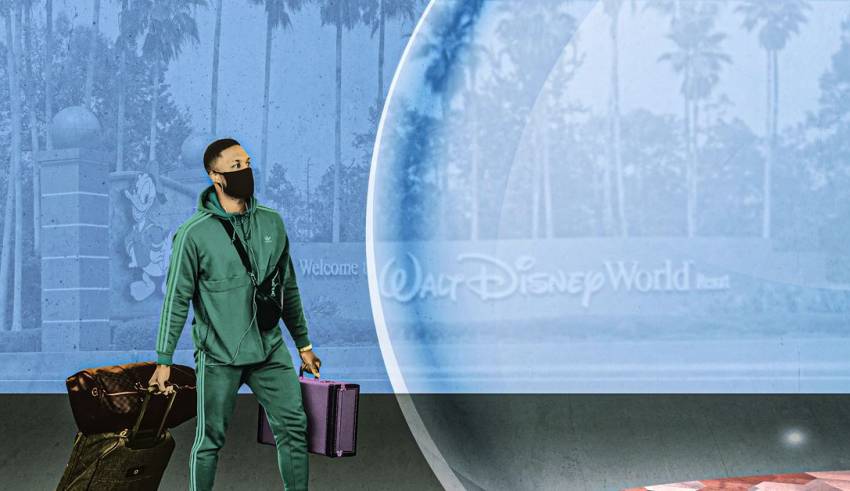 Brad Stevens barely had a chance to step outside his Disney World hotel room Friday before he was shuttled 10 minutes away for the Celtics’ first practice in Orlando. He had just finished quarantining for 36 hours, but Stevens was already thinking about the following day’s practice, and Sunday’s session, too.

“I probably had a different [idea of the] practice schedule three weeks ago then now after seeing the practice schedule,” Stevens said. The team’s Friday practice lasted just half of the allotted three hours, in part because the group had to turn around quickly for Saturday’s 9 a.m. workout, which made it difficult to go hard on either day. Then, ahead of Sunday’s session, the team had to switch gyms at the last minute and work without Kemba Walker, who did not practice as part of a slower ramp-up process. “There will just be some things like that that we’ll have to adjust to,” Stevens said. “We’re able to hit curveballs if we need to.”

That Celtics are far from the only group that needs to be flexible. As the teams inside the Orlando bubble have started to practice for the first time in four months, they have each encountered their own curveballs. Under these circumstances, being adaptable is perhaps more important than being prepared.

As of Saturday, the Clippers (who are only bringing 15 of 17 possible players to Orlando) and Nuggets had to practice without their superstars—Kawhi Leonard was still in quarantine after arriving a day later, and Nikola Jokic was still making his way back from Europe. The Heat are reportedly missing Bam Adebayo and Kendrick Nunn; the Kings were missing four members of their traveling party. The Lakers practiced for the first time without Avery Bradley, who opted out of the bubble; Danny Green, who was out because of a lab issue with his COVID-19 test; and Dwight Howard, who arrived a day late. In Sunday’s session, Rajon Rondo reportedly suffered a “significant” hand injury. The Blazers have to figure out their wing depth without Trevor Ariza, who opted out of the restart, while also fitting in a now-healthy Jusuf Nurkic and Zach Collins. The Rockets practiced Saturday for the first time, and Mike D’Antoni said they don’t expect James Harden, Russell Westbrook, or Luc Mbah a Moute to join the team until “mid-week.”

Even for those teams that do have their entire rosters active and on site, no two players are in the same physical shape. Some had access to gyms before facilities opened—at least 10 players on six different teams were part of a group that worked out for three months at a private gym in Texas—while others, like Khris Middleton, hadn’t touched a basketball for three months.

Given the high variance, this “training camp” period holds great weight—even for teams that are already securely in the playoffs. “We’ve just gotta make sure every day is valuable,” Thunder head coach Billy Donovan said Saturday. “We can’t waste any days.”

Meyers Leonard says he studies the Heat’s playbook, which roughly consists of 60 to 80 sets, as often as anyone on the team. And yet on Saturday, as the Heat practiced half-court drills inside a ballroom gym, even Leonard had to do a few double takes when some particular sets were called.

“I was looking around like, uh, I might need to go study the film a little bit more,” Leonard said.

Luckily, the Heat staff is helping with that. They’ve provided each player with a video playbook, and coach Erik Spoelstra said he’s using the first few days in Orlando to review what they had in place before the season came to an abrupt stop. Miami also did a short five-on-five scrimmage on Saturday, although Spoelstra turned into the enemy when he halted live play for the day. “I had everyone yelling at me, ‘No, let’s keep going, one more game,’” Spoelstra said Saturday with a chuckle. “The guys could have kept on going.”

As every team in Orlando went through in their first, second, or even third practices over the weekend, a consistent theme came up: Players are hungry to play, but coaches are being careful about the process of ramping back up given the long layoff. In some ways, this restart is a continuation of the 2019-20 season. But many have also acknowledged that it feels like an entirely new season altogether.

“The only thing that’s the same is our record. The situation is different … everything is sort of condensed due to the circumstances,” Carmelo Anthony said. “One day you might have practice in the morning, the next day at night.”

For as much as coaches would like to have things planned for the next three weeks, they’ve already had to make tweaks on the fly. Nick Nurse said he had an idea for how to structure the Raptors’ first practice on Saturday, but by the end, he’d run it completely differently. “It did feel like Day 1 of training camp. … There was effort, excitement, guys getting tired earlier than usual,” Nurse said. “I’m really trying to feel my way through it.”

“It’s kind of like a sprint of a marathon or a marathon of a sprint,” the Heat’s Andre Iguodala said. “Everyone’s adjusting to a new normal.”

What’s more: The new normal is being tackled differently by each team. While the Heat, Blazers, Grizzlies, Sixers, Jazz, and Kings all had five-on-five sessions this weekend, the Bucks only did small-group work, shooting, and stretching. The Lakers, for their part, focused on movements they hadn’t done in a while such as defensive slides, and their version of five-on-five work that, according to Frank Vogel, consisted of going “down, back, then stop.”

Sacramento had little to no contact during their first live sessions before going full contact on Sunday, while the Blazers immediately began playing with contact, even scrimmaging to end their first practice. “It was fun to get up and down and get hit by some screens,” CJ McCollum said. Portland and Miami players in particular seemed adamant that they weren’t rusty, with everyone from Damian Lillard to Terry Stotts to Iguodala touting the players’ ability to stay in shape since the stoppage.

The Nuggets, however, found themselves on the other end of the spectrum, in part, because they had to close their facility in late June due to a positive COVID-19 test. “I’m not in game shape,” Jamal Murray said Saturday. “If somebody’s in game shape, man, they’re doing something they shouldn’t be doing. … Once we get the other half of our team back, we’ll get back in shape.”

Of course, each team’s respective goals also factor into planning and pacing. As Mike Malone pointed out, Denver is already in the playoffs and doesn’t have to go 8-0 in seeding games, while the Blazers have eight games to catch up to the no. 8 seed Grizzlies or go home.

With so much new and unknown—even beyond practice planning—teams are trying to identify what’s familiar and hold on to it, or at least re-create a version of it.

Stotts and his coaching staff usually huddle up in his hotel suite on the road to gameplan. In Orlando, they can’t go into each others’ rooms, so they found a spot on campus where they could meet. Next up, Stotts, an avid walker, says he needs to “get his ass in gear” and find a walking route since the Blazers’ hotel doesn’t have a loop.

Spoelstra said once the Heat go into a gym, things feel normal, as the ballroom setup reminds coaches of their training camps in the Bahamas. The Jazz, meanwhile, filled up a truck with their weight room equipment from Utah in order to give players some stability in Orlando.

Steven Adams said he saw some of the viral posts about what the food was like in Orlando before he left, so his wife made him “a couple batches” of homemade lasagna, which now sit inside his fridge. Rick Carlisle brought his exercise bike from home and some weights to work out in his room, while Lou Williams set up his own recording studio to finish “a project that was due out July 4th,” which he delayed. JJ Redick gave us a glimpse into what ice baths might look like for players in the bubble too:

So far, though, what seems to have provided players with much-needed familiarity is the game itself. Nearly every player and coach has waxed on about how much they missed playing basketball and sharing the court with teammates.

“We felt like a lot of loose poodles let out of the cage,” the Spurs’ DeMar DeRozan said of the team’s first practice in Orlando. LeBron James said the “AAU feeling” was great because it put a focus on the joy and love of the game, while Fred VanVleet compared it to the first day of school.

“Once we get into the gym everything feels more normal, and the excitement to get back and play is real,” Spoelstra said. Achieving “more normal” seems to be the ultimate goal of the next few weeks, and that means everything from studying offensive sets to players assuming their usual roles. As the Celtics’ Robert Williams told reporters Sunday, one sign of that is that is already happening for Boston: Marcus Smart is talking trash.