April 22, 2021
Trending
Home NBA How Much Are Fans—or a Lack Thereof—Affecting NBA Games This Season? – The Ringer 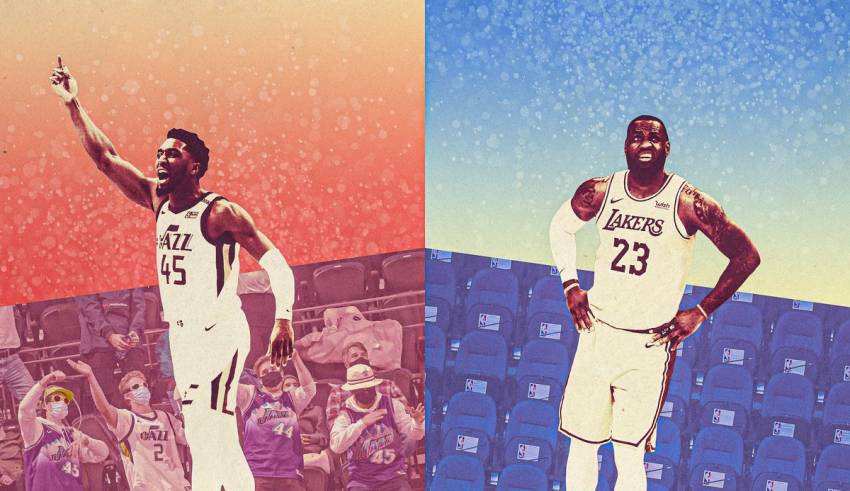 Fourteen NBA teams are currently allowing fans to attend games, and some evidence suggests that it’s having an impact on home-court advantage. Yet as some focus on the competitive aspect of bringing fans in, others remain wary of the health risks.

Deandre Ayton hates fake crowd noise. It does nothing for him. And so, after Ayton finished off a lob from Chris Paul in the second quarter of Monday night’s game against the Blazers, the noise he heard was music to his ears. The pumped-in cheers still hummed throughout Phoenix Suns Arena, but so did the sound of just over 3,000 real people.

Ayton finished the night with 19 points, five rebounds, two blocks, a steal, and a season-high plus-25 plus-minus in 26 minutes. After the game, he attributed some of his performance to the energy in the building, which stemmed from the few thousand fans the Suns have allowed in for home games since February 16.

“I’m telling you, I missed the fans a lot,” Ayton said. “Just seeing our people out there is amazing, and we’re playing for them, so just even hearing them yell out your name, you miss that. Even when it’s a fan of an opposing team yelling at you, you miss all of that.”

On the other side of the floor, Portland head coach Terry Stotts said he noticed the noise and its effect on the game for the first time all season. “In other venues that have had fans, it’s been a small number. So I don’t think it had an impact on the game, especially with a lot of the arenas that pipe in crowd noise,” Stotts said. “[Monday] night … it was the first time I thought it was noticeable.”

As of this week, 14 NBA teams are allowing fans inside their arenas for games. That number has jumped from the five teams that started the season with fans—Cleveland, Houston, Orlando, New Orleans, and Utah—and is likely to keep growing. The largest number of people currently allowed in any one arena is 4,500 in Houston, but teams like the Pacers (who have allowed at least 1,000 fans since January 25) have said they will increase capacity as local regulations allow.

In a typical NBA season, it is assumed that playing at home give teams an advantage—and the numbers bear that out. Between 2000 and 2017, home teams won 59.9 percent of games, and though the past eight seasons have all featured home-team winning percentages below 60 percent, the figure has never tilted in favor of the road team. This year, though, the effect of home-court advantage has been more complex. Overall, home teams are 251-217, a 53.6 winning percentage that would be the lowest for any full season. As ESPN’s Kevin Pelton pointed out this week, home teams in arenas with no fans have won an even lower 52 percent of their games. But through Tuesday’s games, the percentage for home teams that have had fans was 56 percent, just above the 55.1 winning percentage home teams had last season outside of the bubble. And over the past two days, home teams that have had fans in the stands have gone 9-2.

Those margins may seem small, but the coaches and players who experience the swings of a season firsthand are starting to notice—especially in arenas where the number of fans jumps into the multi-thousands. Yet, as more fans trickle into arenas, the push and pull between the inherent health risk that comes with allowing more people into the building during the pandemic and the competitive advantage it could present is starting to create some tension.

“It’s an advantage for us,” Suns head coach Monty Williams said. “Early on, when we would go to Memphis, Utah, and Houston, you could see the advantage for those teams, having fans in the building. And so for us to have the number of fans that we have, you can feel it.”

If you’ve ever wondered whether teams will take any competitive advantage they can get, look no further than Clippers owner Steve Ballmer’s performance on Sunday night. As the Nets-Clippers game went down to the wire inside a fan-less Staples Center, Ballmer, sitting alone behind the basket, began clapping at different rhythms in order to try to distract DeAndre Jordan at the free throw line. Without any other people to join in, the tactic didn’t totally work. Jordan made one of two, and the Nets won by four points.

The Clippers and Lakers have not had fans all season, and both teams have better records away from home than at Staples Center. The Lakers in particular have gone 13-4 on the road and 9-7 at home. In normal seasons, every Lakers game is performance art, on and off the court. The theater lighting, celebrities sitting courtside, and in-game entertainment makes for an experience that only feels whole when Staples Center is full. This season, though, that aura has evaporated.

Lakers DJ Jeremy Roueche, who has had to keep DJing as if there are fans in the building, described the scene to me last month as a “scrimmage where nobody is allowed in.” And he’s not the only one feeling the disjointed atmosphere. Lakers reserve Jared Dudley said this week that players believe Staples Center and Madison Square Garden are the weirdest arenas to play in with no fans. And he has no qualms about connecting the Lakers’ poor play at home lately (three straight losses) to that fact.

“That’s why you see we play much better on the road,” Dudley said. “Because let’s be honest, if you go into Memphis, you go into some of these different stadiums, they don’t have large crowds anyway. But for Staples, when you walk in there’s a certain energy, and it’s like MSG. So for us, it’s been at home, getting the energy to come out, that’s why we’ve struggled with that.”

LeBron James has never shied away from talking about how important fans are to what he does. And as questions linger about his workload this season (he’s averaging a team-high 35 minutes per game and hasn’t missed a contest), and other members of the team express exhaustion due to a short offseason and condensed schedule, it seems like any added energy could help produce a boost on the court.

“Over the course of the game, you can just feel the energy in the gym,” Grizzlies coach Taylor Jenkins said after the team began filling its arena to 11 percent capacity on February 4. “When we made our run in the second half, they were picking up our spirits. So it was awesome.”

A closer look at the numbers reveals a few interesting fan-related trends so far this season. The Lakers, Clippers, Spurs, and Bulls—none of which have had fans at home games—have better road records than home records. And while the sample size this season is still small, anecdotally, coaches and players appear to be noticing the differences as they bounce between fan-less arenas and ones with crowds.

“Back when we went to Houston, that was the first time we had fans in the arena, and it’s a different feeling,” Kings forward Harrison Barnes said. “To actually have that, that different energy, rather than just the music that’s playing in the speakers, it feels like how things used to be in a sense.”

Of course, bringing fans into arenas increases the risk of spreading COVID-19 to staffers, players, and the fans themselves. Before the season began, the NBA elected not to put rules in place as to how many fans, if any, would be allowed into arenas, instead leaving it up to state and county authorities to decide. For some players, like Marc Gasol, this didn’t sit right—before the season, Gasol wondered aloud why there couldn’t be a blanket policy regarding fans this season so that every team went the safest route. Now that we’re nearing the halfway mark of the season, though, teams have accepted the reality and are starting to ponder the competitive implications.

One front office staffer of a franchise that isn’t allowing fans said there’s been internal discussion about the subtle edge other teams are getting, as well as the fact that—if the crowds continue to grow—the edge could become even more pronounced by the playoffs. It’s also why the notion that seeding won’t matter this postseason doesn’t hold water. One fewer game with fans or vice versa might be the difference between a team advancing or going home.

“I think it’s definitely a competitive advantage,” Nuggets head coach Mike Malone said Tuesday night before Denver faced Portland. “It is sometimes eerily silent in our building. There’s no one there. I don’t know if weird is the right word, but it’s definitely different. I’m hoping that at some point we can get some fans back in here because they’ve been a big part of our success.”

Perhaps no team has benefited more from having fans in their building than the Utah Jazz. Don’t get me wrong: The Jazz (league-best 26-6) would be one of the best teams regardless of where they play. But Utah has been unbeatable at home—the team’s 15-2 home record is the best in the NBA, and they’ve been better by virtually every statistic when playing in Utah.

“There’s just more energy, more juice in the building,” Charlotte coach James Borrego said after his team lost to the Jazz in Utah on Monday night. “It does not feel that way in our arena, I can tell you that. Hopefully we’ll get some fans back in our seats too.”

At the start of the season, the Jazz allowed only 1,900 fans into their building, but that figure jumped to nearly 4,000 on February 2. Since then, the team hasn’t lost a home game.

Some coaches and players don’t really buy into the belief that fans can sway a game. The Magic, for instance, have an 8-9 home record despite having allowed between 3,500 and 4,400 fans since the start of the season, and head coach Steve Clifford says that while it’s nice to have some fans, it’s nothing like playing in front of 16,000 people. “It’s a little odd, but once you go onto the court, you pretty much focus, you don’t really notice,” Terrence Ross added.

While the Wizards haven’t had fans in D.C. yet, coach Scott Brooks said he’s been pleasantly surprised by how his players have been able to manufacture energy for themselves. And players, especially those on the bench, have said they feel an added responsibility to do just that to account for the lack of fans. But even so, bench guys can’t replicate the noise and juice from thousands of people.

As the Nets’ Joe Harris put it Tuesday night, when the Nets hosted fans for the first time all season, having somebody there to cheer you on—even just the 324 people Brooklyn allowed in—is better than nothing.

Nash believes the fans can give players a boost, especially during a season that’s been so difficult on and off the court. But the reason it’s been a difficult season cannot be ignored, and Nash is quick to mention the reality that underscores this entire situation: Inviting fans into the arena should happen only if it can be done safely.