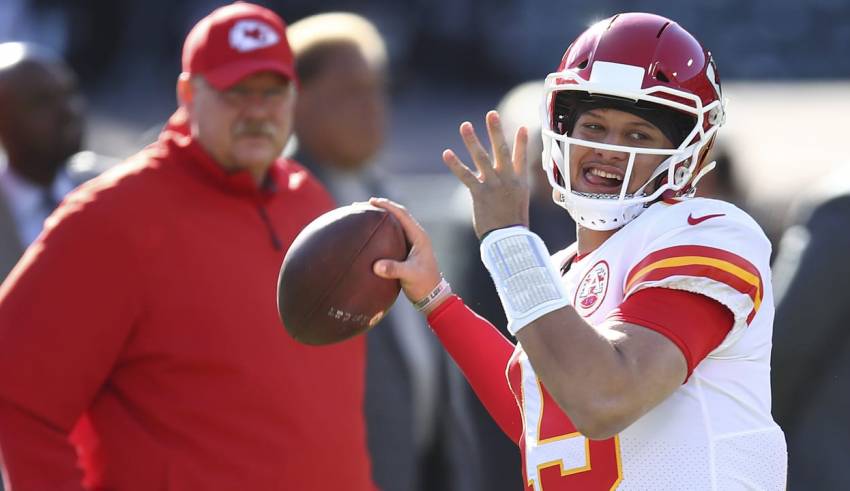 Mahomes is clearly the straw that stirs the drink in Kansas City, but the Chiefs have surrounded him with a cast of playmakers who perfectly complement his talents. Tyreek Hill, Travis Kelce and Sammy Watkins are a lethal trio. As a potent deep-ball thrower with A-plus arm talent and range, Mahomes is able to push the ball down the field at every turn to the track team of pass catchers at his disposal. The individual and collective speed on the perimeter enhances the QB’s rare playmaking ability and makes the unit nearly impossible to stop.

Meanwhile, the Chiefs’ offensive line features a pair of rock-solid bookends in RT Mitchell Schwartz and LT Eric Fisher. In fact, Schwartz is one of the very best right tackles in the game, having earned All-Pro honors in each of the past four seasons (first-team in 2018, second-team in 2016, ’17 and ’19). Schwartz and Fisher are athletic blockers with the capacity to snuff out elite rushers while providing Mahomes with enough room to throw from deep in the pocket. As a tandem, they work well within the Chiefs’ system and anchor an offensive line that routinely keeps the QB clean.

Looking at the composition of the Chiefs’ supporting cast, it matches perfectly with the vision Hall of Fame executive Bill Polian outlined for me on a recent Move The Sticks podcast. The legendary personnel man told me that championship teams built around a big-money quarterback should have a No. 1 receiver, a couple of blue-chip offensive tackles and an additional playmaker in the offensive lineup. The Chiefs check off each of those boxes, which is why they’re heading toward the 2020 season as the defending champs.

That said, the Chiefs core could begin to see attrition after the coming season, when Watkins’ recently restructured deal expires. Then Kelce, Schwartz and Fisher are set to become free agents after the 2021 season. Although Hill is signed through 2022, the Chiefs will need to reset their roster around then, with Mahomes’ 2023 cap number eclipsing $42 million, according to Spotrac.

This doesn’t necessarily mean that the unit will be completely blown up in the coming years, but Reid and Veach will need to determine whether a group of 30-somethings can still make a push for the title or if a new-and-improved supporting cast is needed to sustain the championship hunt.